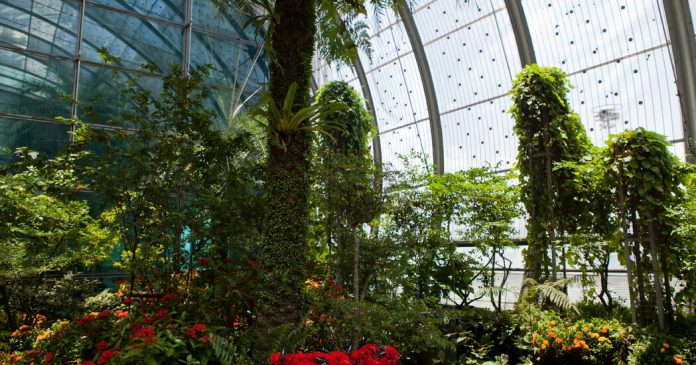 It's hard to tell whether Singapore Changi Airport is an entertainment complex or an airport.

Changi has a three-screen movie theater, an indoor butterfly garden, a rooftop pool, and imaginative restaurants that attract as many locals as travelers.

With more than 400 stores including Apple and Tiffany & Company (there are two), Changi Airport would be the fourth largest mall by number of tenants if it were in the US.

An audience that is both captive and often wealthy has made the commercial space of airports one of the most lucrative in the world. But the pandemic has shattered commercial bills at airports and no one is sure what's next.

According to a 2018 report by Airport Experience News, Los Angeles International is the leading airport for concessions and retail sales in the United States, with $ 3,036 per square foot in revenue. Chicago O'Hare ranks second with revenue of $ 2,718 per square foot. By comparison, the average malls retailer is around $ 325 per square foot, according to CoStar in 2017.

“Generally sales are in the toilet,” said Mr. Gluck. For example, concession sales at San Francisco International Airport fell 96 percent in May compared to the previous year. Duty-free concession sales fell 100 percent because all stores were closed. In May 2019, duty-free sales were $ 11.5 million.

By the time passenger traffic returns, Gluck said, airport retail properties will not be profit centers, and even if they do return, capacity may be reduced.

"I think we need to rethink existing heuristics unless we think customer behavior is returning to what we consider normal today," he said, adding that activities like health screening often leave room for other needs, normally Concessions, create.

Many concessions are likely to require more social distancing space, reducing the amount of retail space airports can offer.

The amenities that once made airports a stellar profit are the same things that prove to be challenging. For example, Changi theaters are closed not only to protect against pathogens, but also because traffic is too little to justify operating costs.

"We will be scaling our airport operations based on the number of passengers we serve," said Ivan Tan, senior vice president of marketing communications for Changi Airport Group, which operates the facility.

Traffic at the airport has dropped to 1 percent year-on-year, which leaves little market for movies or gourmet dishes, said Mr. Tan. The airport is using this time to close Terminal 2 in order to accelerate planned renovation work. However, the pandemic will result in some facilities being replaced with new ones.

"The longer-term effects of Covid-19 on the facilities and amenities we offer remain to be seen," he said.

So far, the pandemic has not halted any planned or ongoing terminals in the US, although some airport operators are rethinking amenities for travelers.

Kansas City International Airport is in the middle of a $ 1.5 billion terminal renovation plan to merge its three terminals into a single giant with 39 gates, including a two-story fountain, children's play area, and upgraded concessions.

It's not the first time the airport has been remodeled during a major disruption to the aviation industry: on September 11, 2001, the airport was in the middle of a major overhaul. Changes to the privacy protection areas had to be made quickly and the inner and outer glass reinforced.

“In this case, the project was underway. The adjustments were made and it wasn't too late, ”said an airport spokesman, Joe McBride. "We are still at the beginning of this terminal project, construction has not yet been completed, so we are in better shape than on September 11th."

Other ongoing projects, including at La Guardia Airport in New York and in smaller markets such as Lafayette, La., Are progressing but taking a wait and see when making adjustments.

The new construction of the terminal should not only focus on the coronavirus, but also on other respiratory diseases, said Dr. Anthony S. Fauci, Director of the National Institute for Allergies and Infectious Diseases.

"The overcrowding of things in an airport has always made me feel uncomfortable, especially in a less modern one," said Dr. Fauci. "People are literally nose to nose waiting to get on a plane."

He said new terminals should have enough space for people to spread, provide highly efficient particulate filtering, and hand out free masks.

He would also like to see more airport health checkups to prevent the spread of viruses in Wuhan, China and Milan, Italy. Such tests could include temperature checks, questions, and contact tracing. With 40 percent of coronavirus cases asymptomatic, the task is challenging but still worthwhile, he added.

"You can't throw your hands up and say it's impossible," said Dr. Fauci.

"After September 11th, no other airlines had touted their safety," he said. Travelers will be more likely to fly again if airports now apply the same safety standards.

In Kansas City, officials make adjustments if necessary. When more space is needed, flexibility is built into the design, something older airports cannot easily do.

"So far we have not changed course or changed the existing new terminal design, but we are at the early stages of research into ways to improve the safety and health of travelers," said McBride.

The new building will give the airport more flexibility in managing this or future pandemics, including the ability to conduct outdoor health screenings, said Laura Ettelman, managing partner at Skidmore, Owings and Merrill, an architecture and design firm in New York, is overseeing the renovation of the airport.

The pandemic will accelerate future terminal construction at other airports to allow flexibility, she added.

“Airports are architecturally difficult because they quickly become outdated. All the buildings we are working on today are about flexibility and more flexibility, ”said Ms. Ettelman.

"We're not going back now," said Curtis W. Fentress, a Denver-based architect whose company is involved in redesigning the international terminal at the George Bush Intercontinental Airport in Houston, as well as the terminals in Nashville and Orlando, Florida. "What we can all do is clear things up and make things as non-contact as possible."

Even before the pandemic, he tried to keep things contactless.

"You move an enormous number of people around the airport. So I'm introducing daylight to guide and guide you around the building so that you are hygienic and feel as clean and safe as possible," he said.

But bigger changes are needed, said Henrik Rothe, an airport planning lecturer at Cranfield University in the UK, who has designed airports in 45 countries. Airport disruption is the most complex ever and everyone involved needs to come together to redefine it, he said.

The 2002 SARS outbreak was a pandemic warning that most airports ignored, he said. In the long term, airports will have to reassess their operations and may need to focus more on business and infrastructure than convenience.

"Airports must become multi-purpose trading centers that are sustainable and resistant to disruptive events," said Rothe.

Distant Work Is Right here to Keep. Manhattan Could By no...