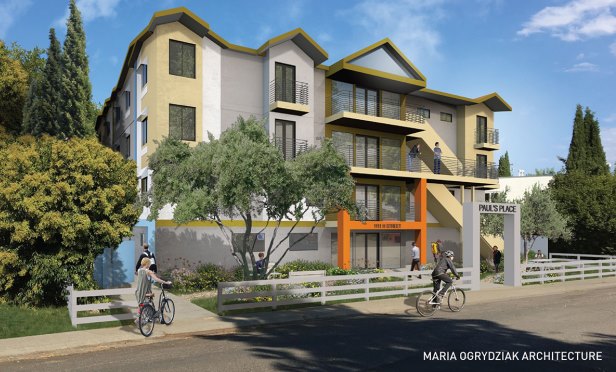 DAVIS, CA – The Joint Center for Housing Studies at Harvard said late last year that funding for affordable housing is now shifting to local and state sources. According to the Joint Center, Proposition 1 is one of the local / state actions in recent years that provided $ 4 billion in bonds to housing programs for low-income residents when they were approved by voters.

As in many areas of California, Davis, home of the University of California-Davis, is facing a homeless crisis. According to a 2019 time census, the number of people who became homeless on any given night in the city increased by 20% compared to 2017.

One of Davis' solutions is Paul & # 39; s Place, a housing development for the homeless, which was passed unanimously by the city council on June 2nd. Paul & # 39; s Place is designed to provide housing and all-round services to the most vulnerable people living homeless in Davis. It's a multi-function project and the first vertical concept for tiny houses.

This project is one of the exceptions to the state funding trend. The main contributors were the $ 2.5 million Sutter Davis Hospital Foundation, the Sutter Foundation, the Partnership Health Plan, and many other individuals, corporations, and foundations. It is sponsored by Davis Community Meals and Housing. The designer is the local architect Maria Ogrydziak.

"Prior to approval by the city council on June 2nd, we had funded the project for the past two years and worked with various organizations, companies, community leaders, denominations, and individuals to get their input and support," said Bill Pride. Executive Director for Davis Community Meals and Housing, tells GlobeSt.com. “The project is fully funded by donations and we have not accepted any government funding for the project. We have reached our key milestone in financing the project and are now moving forward to obtain our building permit. "

Certainly the pandemic slowed the pace of fundraising and general approval of the project in general. The first timeline had a tentative start this year, but that wasn't set in stone, Pride said.

“As a non-profit organization that uses all private funds, we didn't have a set schedule. However, we are now hiring our construction architect and various consultants and engineers to submit our plans to the city for approval. We hope to start construction in the next eight to twelve months, ”Pride told GlobeSt.com. “However, we had great success in our pre-pandemic fundraising drives and in promoting community support. In a way, the pandemic focused on projects like Paul's Place to accommodate the homeless members of our community. "

The center replaces and enhances the rundown Davis Community Meals and Housing facility that has operated at 1111 H St. for decades. A resource center on the first floor with an expanded program room connects the participants with public services, housing and employment opportunities as well as health and personal services as well as basic needs for food, clothing, showers, toilets and laundry facilities. There will also be four new emergency shelters for law enforcement and other service providers.

The second floor has temporary accommodation with 10 single rooms, a communal kitchen, a family room, bathrooms and a laundry. The third and fourth floors will house a total of 18,300 square meters of small private apartments with permanent support, two of which will be accessible to people with physical disabilities.

"I got involved for the first time a few years ago, after having had the same personal interactions with the homeless over the years that many of us have seen and wanted to help with content," Ogrydziak told GlobeSt.com. “Paul & # 39; s Place is an innovative solution that could be a great option for other communities as well. The design is sensitive to the location and neighborhood, and the architecture also signals to residents and the community that this is a home, a warm and welcoming place. I designed Pauls Place with the concept of a village with tiny houses. Instead of a group of apartments on a flat plot of land, imagine an Italian mountain town with stairs and an elevator, with living spaces and common areas arranged vertically. "