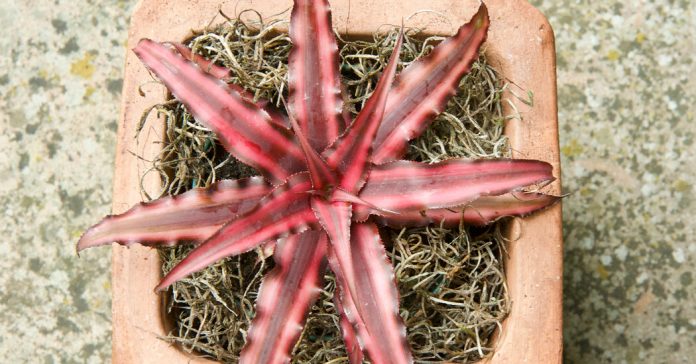 In a moment filled with all too much the unknown, there is comfort in small things that remain constant.

My grandmother's Clivia sits faithfully next to me and asks little questions, as it has for more than 40 years. Although it is no longer that small, there are now three massive pots of it.

Marc Hachadourian, director of greenhouse horticulture and chief curator of the orchid collection at the 55,000-square-foot Enid A. Main Conservatory of the New York Botanical Garden, has a similar companion, a Sansevieria that he adopted from his grandmother as a boy. It survived a house fire and has been thriving for decades.

"It's more of a pet than a plant," said Hachadourian, acknowledging a shared bond that has spread further over these months. "I've seen people run indoor plant adoption ads, like a social media influencer who moved to LA and couldn't take them but wanted to make sure they found a good home."

During the pandemic, Mr Hachadourian's job of overseeing the care of more than 2,000 species of plants in the conservatory's 11 interconnected galleries continued, even as the building closed and the 117-year-old palm dome renovated.

He recently replanted a Pilea cadierei, a botanical cousin of the social media star Pilea peperomioides (also known as the Chinese money plant), with its glossy, coin-like leaves. Mr. Hachadourian's Pilea was added to the collection by Thomas H. Everett, one of the foremost gardeners of the 20th century.

Working with "horticultural history and the history of scientific research and exploration of the garden," he said, "brings back the people who wrote the books I studied from – and those are the plants they touched."

This line of plants is not only found in the Botanical Garden, he noted: "People have this in their homes and families too."

But even if you're lucky enough to inherit your grandmother's favorite plant, you may want to add it to your collection. As fall approaches, we've compiled a list of houseplants – permanent favorites, a few weird balls, and the most cooperative orchids – to look into.

Let's start with the almost indestructible "those you won't miss if you go away for two weeks and nobody waters them," said Hachadourian.

He calls them "the pizzeria plants": a pothos or dieffenbachia, he said, "defies all possibilities and stays alive in the corner of the restaurant, even with an inch of dust on the leaves."

It is the same with Sansevieria or the snake plant – and in addition to Grandma’s simple, dark green version, there are varieties that are colored marbled or bordered in white or gold, dwarf varieties and those with cylindrical instead of blade-like foliage. "Be sure to keep her in bright, indirect light and pot-bound," said Hachadourian. "They can even bloom with scented honeysuckle flowers at night."

Clivia miniata is another reliable choice. The only difficult part might be getting a good sized plant to get started. Give it bright light, but no direct midday sun, and well-drained potting soil. To mimic the dormant period that causes a bloom in its natural environment, I bring mine into the house before the first freeze. I move it to the coolest place in my house, a mud room with lots of windows, and start holding back water.

While I can't exactly control it – it will never bloom on schedule and qualify for the Clivia Society's annual shows in March – I try to keep it below 55 degrees (but above 35) and dry from October through January. Next, after a couple of weeks of raising the temperature well into the 60s when the days get longer, I resume watering and flower stems start to emerge.

Mr. Hachadourian and I both have a soft spot for weird balls, including some very low-water, low-maintenance people who basically have no leaves.

Like this bunch of fat, light green onions in my dining room that might grow into a frothy vine for maybe half a year: Bowiea volubilis, the climbing onion, is a long-lived onion from the asparagus family.

"Whimsical doesn't always mean difficult or challenging," said Hachadourian, who puts the once ubiquitous Christmas cactus (Schlumbergera) in this category because it is weird among cactus family members.

"It's a very different type of cactus," he said. “Most of them are prickly and angry, but not this one with its leafless, articulated stems and then these wonderful flowers. I wish more people would grow them again. "

Not a desert plant, this bright type with filtered light: His ancestors were epiphytic and lived in trees in Brazilian rainforests. Schlumbergera blooms in response to shorter days with prolonged darkness (13 hours or more per night), accompanied by cooler nights (55 to 65 degrees), from the autumnal equinox to around Thanksgiving.

Both Bowiea and Schlumbergera like quick-draining potting soil. And don't overdo it: narrow areas are preferred. Also conserve the water. (At Bowiea, start holding back water when the vines turn yellow in the fall, indicating calm.)

And what can you not love about a plant that moves? The prayer plant Maranta leuconeura has vividly marked leaves that fold at night. Mr Hachadourian's aunt had one on her kitchen window sill (it also makes a nice hanging basket).

Her reaction when she embarked on the nightly routine: "Wonderful – magic!"

The most reliable of the more difficult types

Begonias, many of which have showy foliage and bonus flowers, are a must see. But Mr Hachadourian suggested that they at least stay away from the silver-leaved Rex types for the time being. Their high demands, including high humidity, can be difficult to meet, especially in winter.

Other rhizomatous types are easier, he said. One that the Botanical Gardens Plant Information Line receives many inquiries about is a 19th century hybrid, Begonia Erythrophylla, the beefsteak begonia or pond lily that often appears in old handmade pots.

Some durable rhizomatic varieties with modified stems that look like caterpillars have lived in my house for many years. Marmaduke is a tall plant with curled, yellow-green leaves that are splattered with reddish brown and pink spring flowers. Kit Kat is hilly and short, with chartreuse-spotted bronze leaves and white flowers.

Most cane or angel wing begonias that have fibrous root systems are better at home than most rex types, too, Hachadourian said.

Basic care for begonias: give them bright, filtered light and moderate humidity. Keep plants away from drafts and allow them to dry out between waterings. (Kartuz greenhouses, logees, and Steve's leaves offer a variety of begonias and other houseplants.)

"With this latest generation of houseplants, you may not be collecting things to pass on like Grandma did her china," said Hachadourian, "but you could take cuttings of a plant and take a leaf with you to pass on."

Regarding grandma plants, he said looking at the African violet, "It has lost popularity, but once people realized they could spread it – the common mentality of some houseplants makes them social, so why not this?"

His multiplication instructions: take a leaf cut, leaving as much petiole or stem as possible. Cover a water glass with aluminum foil. poke a hole through it with a pencil. Place the stem through the hole where it will take root in the water and eventually form a new plant.

Or give someone an amaryllis pear. (Mr Hachadourian does, then enjoys the recipients' excited email progress reports.) Pass on a jade plant, philodendron, peperomia.

And why not share Cryptanthus, "a strange little bromeliad that I got at the Two Guys Discounter for $ 1.99 and propagated and given away as a child," he said. "I couldn't bear to throw out the offsets."

Cryptanthus plants can be adapted to different lighting conditions and develop the best foliage color in bright light. Unlike other bromeliads, they do not store water in their leaf shell.

Everyone needs an orchid

Mr. Hachadourian, the author of the recently published book Orchid Modern, admits that people want to expand beyond the familiar phalaenopsis, or moth orchid, and suggested two alternatives.

Ludisia discolor, the jewel orchid, is prized for its velvety foliage – unlike most orchids, where the flower is the thing. It roots easily from stem cuttings and produces small white spring blooms even in low light so it can grow happily among other houseplants.

Paphiopedilum Maudiae hybrids, lady's slipper orchids with mottled, checkered foliage and enchanting flowers, require medium to low light. And after the paphiopedilums, they are among the easiest orchids to grow on a windowsill.

New is not always better

Don't suppress the urge to go with what you are familiar with and what has previously bloomed – for you or for someone whose plant sticks in your mind.

The trendy, Swiss-cheese-like monsteras of the moment – the more holes and nicks in the foliage, the more likes they seem to garner on Instagram – can be knocked over when a pretty new leaf hits the scene. But our life partner plants remain.

"You think, 'I had a really nice X and I want to get one again," and that's good – join in, "said Hachadourian.

It's like a successful outdoor garden: replicate your successes.

“Get more of the cast,” he said. "People tend to avoid the common, but there's a reason things are common: because they work."