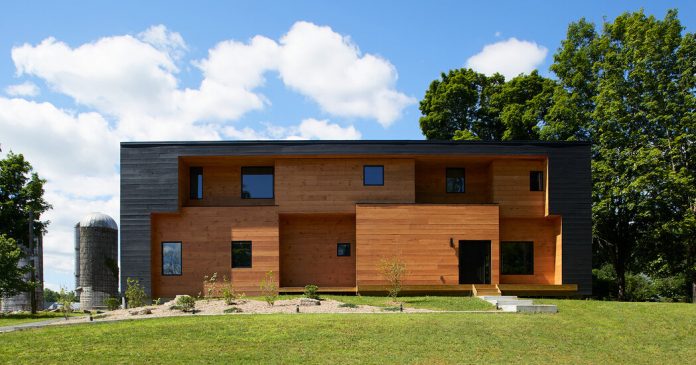 Claire Ko and Eugene Kwak didn't want a forest cabin or beach house as a weekend getaway from Manhattan. They dreamed of living on a farm.

It doesn't matter that neither of them had any farming experience. After years of shopping at the Union Square Greenmarket, they had become increasingly curious about where their food was coming from.

"We saw this huge interest in being able to consume products from the local Hudson Valley," said Ms. Ko, 38, the chief people officer of a cheese factory.

To build this interest even further, 40-year-old Kwak, architect and assistant professor at Farmingdale State College on Long Island, began to fantasize: why not buy some land, give a lot of it to a young farmer, and build a two-family house? House where they could all live together?

He even had a name for his project: Togather.

When he gave Ms. Ko the idea, she had a few reservations. "I said," Do you know that I'm a city girl? "Recalled Ms. Ko, who was born and raised in Seoul, South Korea." I've only lived in cities. I don't know anything about living in a house or in a suburb. "

Mr. Kwak wasn't an expert on rural living either, but he didn't want that to stop him. “When I lived in the city and was exposed to the culinary scene, I was naturally drawn to food systems and looked at them upstream where the production takes place,” he said. "I wanted to combine food systems with my design skills and try to create something innovative."

So he began a two year crash course in agriculture while doing an extensive property search. He spent most of his free time volunteering in the fields of the Stone Barns Center for Food and Agriculture and the Glynwood Center for Regional Food and Agriculture. He also took part in workshops to learn as much as possible about farms (while getting a training weeding and moving earth).

After considering various properties within a two-hour drive of New York, he and Ms. Ko settled on 16 acres in the city of Crawford, New York, Orange County. Once part of a dairy farm, she sat idle. They bought it for $ 175,000 in March 2018.

For the two-family house, Mr. Kwak designed a black-stained pine box that looks like it has been chiseled away in places to reveal a deck, windows and doors. It contains two apartments: a 2,000 square meter three bedroom main unit and a 1,000 square meter two bedroom unit and an attic for a farmer. Thomas Lane Construction completed the building in February 2019 for a total cost of approximately $ 630,000.

To help an enterprising farmer build a farm, the couple decided to offer a free 30-year lease for up to five acres. They also reduced the rent on the farmer's apartment to $ 1,100 a month after discovering that similarly sized homes were renting for $ 1,500 to $ 1,800 in the area.

"I really wanted to support and empower young and young farmers," said Kwak.

When they submitted applications through the Hudson Valley Farmland Finder, a service Ms. Ko referred to as "a website like Match.com for connecting landlords to farmers," they received more than 50 inquiries. After an extensive interview process, they offered Melissa Phillips and Jack Whettam the lease.

Whettam, 34, is from London and used to work as a sales manager for a golf company. Phillips, 35, had a Masters degree in Sustainability from Texas State University. After having their daughter Phoenix in 2016, they took a break to reflect on their future.

"We realized that we want to do something that follows our passions," said Whettam. They made their way to Kern Family Farm in North Fork, California, where they learned about regenerative farming and never looked back.

Ms. Ko and Mr. Kwak's Togather Project enabled them to move to Crawford, where they started the Hidden Acre Farm and produced vegetables and flowers that they now sell in farmers markets, including the Carroll Gardens Greenmarket, in Brooklyn.

But it wasn't easy. "When we got there it was just a field of weeds," said Mr Whettam. Turning the land into a productive farm required significant investments in money and labor.

"You have to dig a well and then bring the water from the well to the crops," he said. “We kept our vegetables, greenhouses and fences refrigerated. We farm organically and regeneratively, so many investments have been made in improving the soil and introducing compost and other soil improvements. "

He added, "We have put all of our savings – and loans – into starting the farm."

After a touch-and-go start last year, 2020 was more fertile. "This year was just worlds apart in terms of indulgence," said Whettam.

And they had neighbors on hand to share in their success after Ms. Ko and Mr. Kwak moved to the farm full time for five months when the coronavirus spread in New York in March.

"Due to Covid-19, we spent a lot more time on the property in the spring," said Ms. Ko. "We were able to help prepare, harvest and weed the market."

"The level of joy exceeds our expectations," said Ms. Ko. "You're just beginning to develop a lot of appreciation for what nature offers."