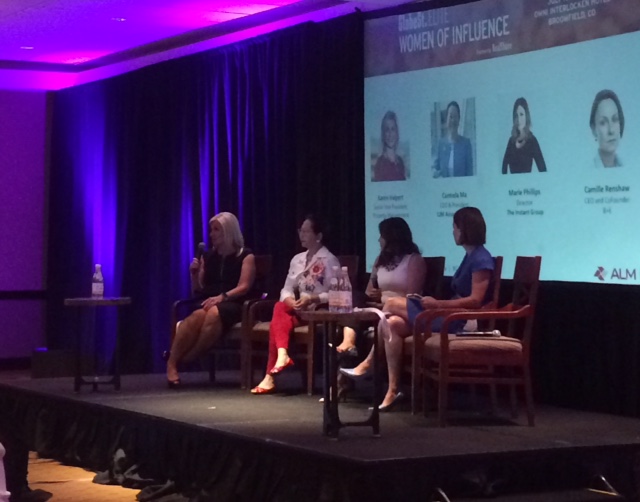 Be authentic and true to yourself and know that there is a place for you, say the panelists at GlobeSt. ELITE Woman of Influence event.

BROOMFIELD, CO – During one of the morning meetings at the GlobeSt. Opening conference of the ELITE Woman of InfluenceWe heard professional advice from women from different backgrounds and industries as they discussed the challenges they were facing leading women in a male dominated industry.

Panelist Carmela Ma, CEO and President of CJM Associates Inc., not only stressed the value of higher education in the industry, but also that it was okay to be underestimated.

Ma, who lives in Los Angeles, sees the value of knowing and says there is no way in this industry you can get anywhere without a strong foundation.

Ma also believes in paying it forward. "This business has been good for me and I've put a lot of time into the next generation," she said, encouraging others to come forward and help too.

There is a culture that respects men more than women, Ma added. "They didn't see us as their main customers." She added that she has been a "bully bait" for years and likes to come "soft", but she really believes it's okay for people to underestimate you as long as you don't underestimate yourself.

Panelist Marie Phillips, Director of the Instant Group, knows what it feels like to be underestimated. At one of her previous companies, for example, she said that her boss was intimidated by her and would never throw any light on her path.

"That was my biggest challenge," she said. The way she tackled this challenge was to go beyond this boss, find a sponsor in the company who believed in her, and overall that propelled her career forward.

Panelist Karen Halper, SVP and Head of Real Estate Management at VEREIT Inc., said that most of the underestimation of her career occurred at a young age. "Once you have reached a certain part of your career and are competent, people can be threatened too."

She said she faced challenges when threatened by her peers and believed that she would step on others to get ahead. "If I continue, it will be because I gave myself up there and not because I stepped on someone."

Her advice is: “Be authentic and true to yourself and know that there is a place for you. You really have to take steps, take risks and have confidence. Men will ask for positions when they are 50% qualified and we feel we need to be 100%. "

She added, "You really are doing yourself a disservice if you don't make the most of yourself." People don't have enough confidence in themselves and it is amazing when you do. "It's amazing what can happen when you are supported by a cheerleader – especially when you are that cheerleader."

Panel Sends 65 Instances Over Prenatal Use of Acetaminophen to New...

Is Co-Working Changing into Oversaturated? | GlobeSt