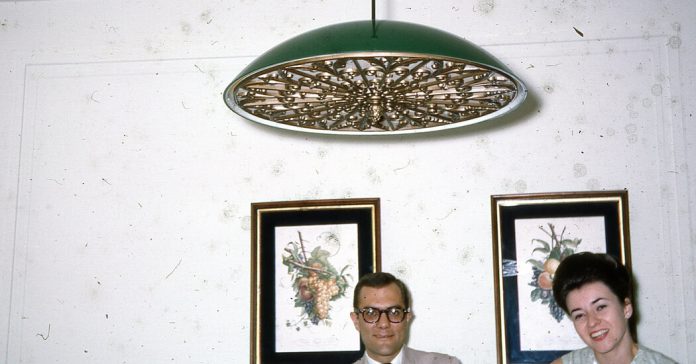 I asked if he remembered that she was excited.

"I do," he said. “But it was also a project with a lot of problems. Stress. Deadlines. It was a design challenge, but also a business challenge. She had to finish the project. These things had to be made. "

She traveled to San Juan twice, the second time to oversee the installation. One of the discoveries in the attic was a postcard from Caribe Hilton that she sent to her in-laws in Cleveland in January 1963. "Here on business – work like crazy but enjoy the warm weather," she wrote and signed: "Lonesome Helen".

The casino project was a triumph, but there were setbacks. While she was working on it or shortly afterwards, my father lost his job as the editor of an advertising media guide when the publisher went down. With her encouragement, he enrolled full-time at Columbia University to get his bachelor's degree while she assisted her. They downsized and swapped their one bedroom apartment on Bleecker Street and West 10th Street for a studio in the same building.

My mother was also – unsurprisingly for a young working woman in the early 1960s – a victim of sexual harassment in the workplace. One of her colleagues, an engineer, had a habit of getting into her personal space and saying inappropriate things, my father told me. There was no HR department dealing with such problems, which were more or less accepted at the time, so that it had to manage them itself.

My father had graduated by 1965 and was accepted into the Foreign Service. And so my mother's career in lighting design was over. They moved to Martinique and then to Paris, where they hung the Caribe Hilton lamp in the dining room of their apartment overlooking the Seine. It was packed away before I was born and moved in and out of camp as we moved from Virginia to Brussels and back, then back to Paris before we got home.

My mother returned to work for a few years in the 1970s and took a job with a company that planned office space. And she found various creative opportunities and learned screen printing in 1969 and 1970 as part of an artist collaboration in Marblehead, Massachusetts, while my father was doing a Masters degree from M.I.T. (Her handcrafted Christmas cards from that period have been preserved, as are three screen-printed Op Art shadow boxes.) Mostly, however, she threw herself into her role as the mother and later the wife of a US ambassador.

Paul Gunther, Keeper of a Cultural Flame, Dies at 65

Separated however Beneath the Identical Roof