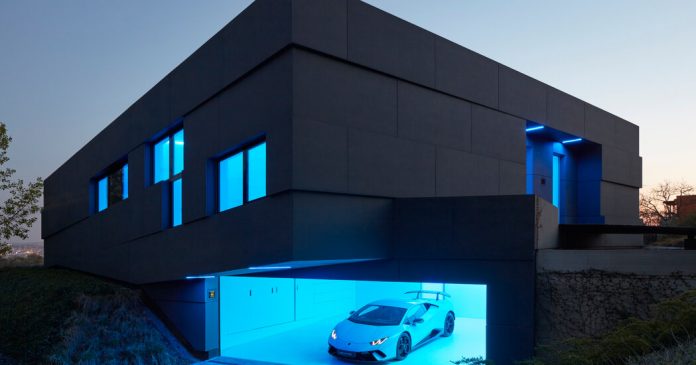 The Villa Sophia is located on a hillside property above Prague in the Troja district and has no keys, no light switches and a piano that can play by itself.

The house can close the windows when it rains and read aloud material selected from the internet based on the interests of the owner. The 500 square meter house is shaped like a helix and offers panoramic views. It is controlled by artificial intelligence.

"The house is like a brain," said Michaela Pankova, organizer of the Open House Prague architecture festival, who shares the house with her husband Karel Panek and their daughters Sofia and Veronika. "It makes decisions for you based on previous experience."

With a predominantly white interior that, together with a spiraling spatial configuration, feels appropriately futuristic, the house designed by the Prague company Coll Coll should not only be automated, but also autonomous. "As we say, if we have to control it ourselves, it's not smart enough," said Panek, a computer scientist.

Mr. Panek and Ms. Pankova commissioned the house to return to the Czech Republic after living in Vancouver, British Columbia for more than a year. The house is both your living space and your office, your "center of the universe", said architect Kristof Hanzlik, partner at Coll Coll.

The couple did not want to compromise on quality and efficiency. When they couldn't find technology that met their standards, Mr. Panek, the brain behind the brain of his house, designed his own system.

Sysloop, both the name of the autonomous building's management system and the company (owned by Mr. Panek and two partners) that created it, integrates a confusing mess of technology into one autonomous system.

While family members go about their daily lives, the system collects data and evaluates this data in real time, then develops solutions and implements them.

“For us everything is a data source. The more information you have, the more precise the solution, ”said Hanzlik, who is also a partner of Sysloop. "It brings more freedom to the design process," he said.

The data is recorded via sensors – in the floor, in drawers, under the kitchen table.

"The house has an idea of ​​where everyone is," said Mr Panek.

Artificial intelligence, which replaces what human intervention in existing systems requires, takes over from there.

"The house is able to answer questions and interpret spoken instructions," said Panek. “It can save instructions and statements so that they can later be applied or checked autonomously. To a certain extent, it can deduce an action from statements such as “I am cold” – hence increase the temperature. "

Including a data center that takes up an entire room, the house cost 80 million Czech crowns, about 3.6 million US dollars. Sysloop, which is available in a generic version, accounted for 20 percent of that cost – "including the Sysloop software technology and all associated hardware," Panek said in an email.

Along with temperature adjustments, the home can adjust its own lighting (the reason there aren't any switches), including toning down the blue – a melatonin suppressor – for better sleep at night. "The lights adapt to our presence and the sun," said Ms. Pankova.

The house has learned that there is a regular sysloop meeting in the office upstairs on Wednesdays, and the ventilation has been adjusted accordingly.

Thanks to the individual control of each door remotely and the assessment of the external context of the house, deliveries can be accepted when the family is away.

It can preheat the driveway to remove snow and ice (but only if it predicts its use and otherwise saves energy) and locks the doors.

Aside from energy efficiency, home security and convenience, the real benefit of the system is that by evolving from a smart home system to a smart home, the homeowner is relieved of the burden of constant control.

"You can focus on the more important parts of life," said Panek.

Of course, a house capable of independent control gives some cause for concern. "Most of the time people ask me," Can your house kill you? "Said Mr. Panek." We are focusing on the implementation of Safety by Design. "

Although Mr. Panek describes herself as a technology optimist, Ms. Pankova said it took her some time to prepare for the system.

"At first I wasn't really enthusiastic about the idea of ​​an AI house," she said. "During the preparation time and later the construction, I slowly became open to the idea of ​​not having a single key for the house, for example however, made some exceptions just for me to have an illusion of control. "

Mr. Hanzlik sat at the kitchen table and pointed out the only window in the house that can be opened manually. "That was for Michaela," he said.

The design of the house, which is characterized by the contrast of its bright white polyurethane floors and walls with dark European walnut accents – including the inclined central staircase – supports the system.

"From my experience, it is difficult to distinguish where the architecture begins and where the system begins," said Hanzlik. "The two are intertwined and complement each other."

The spiral design of the house helps with airflow, as does the sequential opening and closing of doors.

"The shape of the house becomes part of the tool," said Mr. Hanzlik. "A door is not just a door, it is part of several layers of the system."

"We were looking for something that will be for the next century," said Panek. "The world will look very different in the 21st century."

Although Villa Sophia was built to last, it is in a constant state of flux and is constantly adapting.

"It no longer scares me like it did in the beginning," said Ms. Pankova in an email about life in the apartment. “My husband took care of many backup systems that provide us with security (e.g. in the event of a power failure). I feel freer not to have to worry about many things. However, our house is a prototype of the technology, which means changes are made from time to time to test new things.

"So the house is never finished, so to speak," she continued. "It develops with you and your needs, which can be challenging."