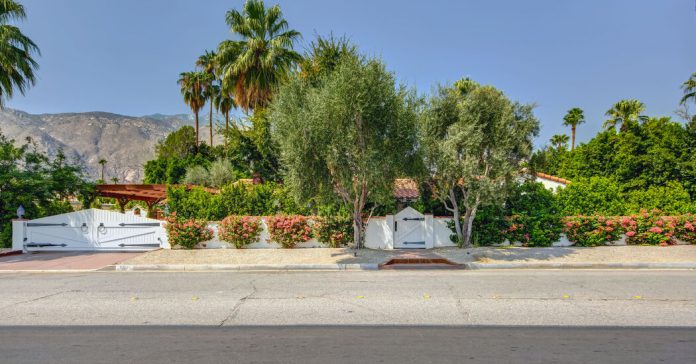 Palm Springs is known for its mid-century modern homes, but there are also a number of Spanish-style homes built in the 1920s and 1930s, like this one in the El Mirador neighborhood. The owners who bought it in 2016 upgraded the air conditioning as well as the water heater and stove.

Palm Canyon Drive, the main thoroughfare in Palm Springs, is several blocks away and the Uptown Design District, known for its antique and vintage clothing stores, is a five-minute drive away. Palm Springs International Airport is 10 minutes away.

Inside: A low stucco wall, accented by flowering hedges, offers privacy from the street. On the other side of the entrance gate, a winding path leads through the front yard, where there are several old trees and a decorative stone fountain.

The front door leads into an airy living room with beamed ceilings and a corner fireplace. The pocket doors open to a dining room overlooking the pool area and a built-in bench for additional seating.

To the left of the living room is a hallway that leads to the kitchen and has been modernized by the owners with wood countertops, stainless steel appliances and a breakfast nook with built-in window seat.

A second hall connects the living room with the three bedrooms. At the other end is the main suite, which like the rest of the house has Spanish tile floors, a bay window with a view of the side courtyard and a bathroom with a walk-in shower. The two guest rooms are large enough for queen-size beds. One has its own bathroom, while the other has a bathroom across the hall.

On the opposite side of the house is a bonus room that was once the garage that could serve as an extra bedroom or home office.

Outside space: The property is planted with citrus and olive trees that provide shade from the desert sun. The back yard, accessible from the kitchen and bedroom wing, is grassed and has a gravel area for a dining table. There is a built-in grill with a pizza oven around the corner. The pool, which is covered with painted tiles, has an attached spa with an adjoining outdoor shower. There is space for three cars behind the entrance gate.

A three bedroom, one bathroom condominium in a two-unit house built in 1909

This condominium is in the lower half of a converted Edwardian home in the Mission Dolores area. The Mission San Francisco de Asís, which was founded in 1776 and is the oldest structure in San Francisco, is about half a mile north. Mission Dolores Park, 16 acres of green space with a playground, tennis courts, and basketball courts, is two blocks away. Mission Street, with its many bars and restaurants, is one block east and Tartine, a popular bakery, is across the street. The 16th Street Mission BART station is approximately half a mile north.

Inside: A steep staircase up from the sidewalk leads the front door into a bright foyer with high ceilings. Many original details, including moldings and plastering, have been preserved throughout the house.

To the right of the front door is a large room with a fireplace and a bay window. The owners who bought the device in 2010 are currently using it as a home office.

The living and dining area is located in a long hallway with wooden floors. The living space is anchored by a wall of original fitted wardrobes with diamond-clad glass doors that surround a marble fireplace topped by a mirror. The dining area is off the kitchen with gray cabinets with quartz and access to outside stairs that lead to the garden.

Next to the main hall are two bedrooms of roughly the same size, one of which is connected to the living room by pocket doors. The other, closer to the front of the house, is connected by pocket doors to the office which could serve as a third bedroom.

Across the hall is a bathroom that was recently done with white subway tile. It has a combination of bathtub and shower and a storage room.

Outside space: Wooden stairs lead down from the kitchen into the garden area which is shared with the owner of the other unit. One side of the room is paved with bricks and the other with concrete; Both offer ample space for outdoor entertainment. A wooden fence and old trees offer privacy from the neighboring buildings. This unit has two parking spaces in the garage as well as additional garage storage.

Topanga is an unincorporated area of ​​Los Angeles County, which was built around the gorge of the same name and is located between Malibu and the Pacific Palisades district of Los Angeles. It was a hub for the arts for a long time: in the 1920s and 1930s, actors and writers built cottages there as weekend retreats from the city, and in the 1960s and 1970s it was home to a number of filmmakers and musicians, including the Singer. Songwriter Neil Young. Today Topanga is a tight-knit community with a small business district, including a general store, at the base of Old Topanga Canyon Road, about a five-minute drive from this property.

Inside: The house is built into a slope along a stream. A series of steps lead from the long driveway to a brick-paved entrance courtyard with a fountain decorated with tiles by a local artist.

The front door leads into a foyer with enough space to sit. Immediately to the left, up several steps, is a partially open area that could serve as a guest room, although it is currently used as a home office. To the right is a bathroom with a claw foot tub.

Behind the foyer is the main living area with an original brick fireplace and skylights that flood the room with natural light. It is open to a kitchen with a Viking stove and windows overlooking the terrace and pool area. There is also a bathroom with a shower cubicle on this level.

From the foyer a wooden staircase with a carved railing leads to a guest room and at the top of another small staircase to the main suite. The master bedroom has a wall unit, additional skylights and a private terrace overlooking the pool. The bathroom, modernized by the owners, has a deep bathtub and an open shower.

Outside space: The kitchen and main living area have access to the rear terrace, which includes a swimming pool and terrace. From the deck, low rock-walled stairs meander up the slope, with garden boxes on the way and a large, flat area overlooking the gorge above. There is an art studio on the brick patio at the main entrance, and three or four cars can be parked in the driveway.

Macy’s to Open A number of Smaller Format Shops

A Historic Brooklyn Mansion Goes on the Marketplace for $30 Million