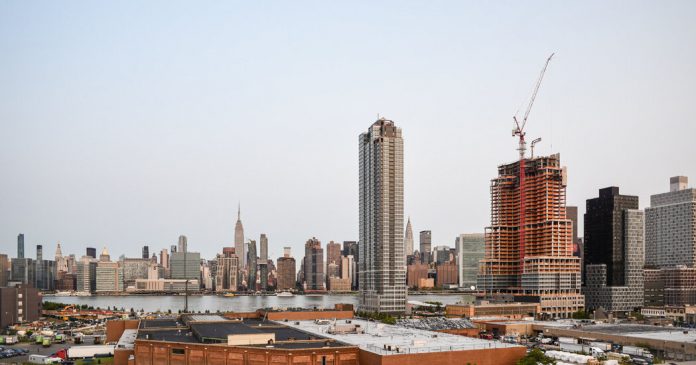 Emerging from a former industrial wasteland, a number of towering structures promise the most affordable housing units that have been built in a New York housing estate since the 1970s. In a plan reminiscent of Brooklyn's Starrett City, Hunter & # 39; s Point South will eventually have 5,000 apartments in multiple towers, creating a new neighborhood for New Yorkers of all income levels.

In the current construction phase, developer TF Cornerstone is adding 1,194 rental units in two new buildings, 719 of which will be affordable. The couple joins the first two towers, built by local affiliates in 2015, which total 925 units.

The mega-project is located on the west coast of Queens and is adjacent to the second phase of Long Island City's newest gem: Hunter & # 39; s Point South Park.

The 11 hectare landscape was completed in 2018 and is now a central part of life in the neighborhood. Hundreds of locals and tourists flock to the park every day. It also serves as an environmentally resilient buffer against future storm surges and will ultimately help protect the 11 new buildings that will fill the southernmost point of Long Island City when completed.

The development extends from 50th Avenue to 57th Avenue, where the East River meets Newtown Creek, and all the way to Second Street. It is based on an initiative from the Bloomberg era to create over 5,000 rental units with 60 percent affordable housing for people with low to middle and middle income residents.

For decades, the 30 hectare area was covered with plants, weeds and hundreds of trees that formed a dense forest by the water. It was an urban adventurer's haven, born from the rubble of demolished industrial buildings such as a Daily News print shop and the National Sugar Refinery.

TF Cornerstone received an offer for one of these lots in 2013 and is currently building two towers at 5241 and 5203 Center Boulevard. Zoe Elghanayan, the company's director and vice president, said she believed development was being "handled just right" in a process that required public and private sector collaboration.

"Because the city could pay for the land and public infrastructure," she said, "developers could focus on maximizing the affordability of these projects."

The first of the two buildings, 5241 Center Boulevard, will open to residents in February. Nearly 200 units were pre-leased in late September through the city's new affordable lottery system, NYC Housing Connect. The lottery is open until November 23rd.

The two-tower development designed by ODA Architecture and SLCE Architects has been in the works for seven years and the road is bumpy.

In the early stages of construction, the project suffered a setback when the New York Power Authority and Amtrak, who own a railroad line under the site, did not allow it Buildings to rest on the underground infrastructure. Originally, the architects envisioned a structure that included two towers connected by a low building. What stands today is the result of multiple redesigns and years of negotiations with the New York Power Authority to reduce the weight of the tunnel.

"This element really jeopardized the feasibility of this project to the point where almost everyone gave up," said Eran Chen, principal architect and founder of ODA Architecture. "It seemed impossible to overcome."

Finally, in October 2017, plans were made to erect two separate buildings on the single property. A new 22,000 square foot public park designed by Mathews Nielsen Landscape Architects would span half an acre between the towers.

The first building also includes 209 off-the-shelf units that will begin leasing later this year. The sister tower, 5203 Center Boulevard, includes 534 affordable units that will be available in the affordable lottery next spring. Monthly rent for the affordable units in both buildings is income based and ranges from $ 698 to $ 2,028 for a studio, from $ 883 to $ 2,544 for a bedroom, and from $ 1,071 to $ 2,704 for a bedroom. The 266 commercial units at 5203 Center Boulevard are expected to be rented out next summer and residents are expected to move next August. The prices for the standard apartments in both structures have not yet been announced.

Half of the affordable units in the two towers are reserved for local members of Community Board 2 in Queens, which includes Sunnyside, Woodside and Long Island City. There will also be 100 affordable, low-income senior citizens' homes, as well as a 572-seat school, 7,700-square-foot community facility, and 8,900-square-foot street-level retail space.

"It's really important that local people apply," said Lisa Deller, Chair of the Community Board. "It's a positive addition to the city's affordable housing stock, but it's a drop in the ocean when compared to needs."

Two more towers from Gotham and the Senior Housing Developer RiseBoro Community Partnership are also under construction at Hunter & # 39; s Point South. One tower designed by Handel Architects will be 57 stories high and the other 33 stories high. This includes 1,132 apartments, 75 percent of which will be affordable.