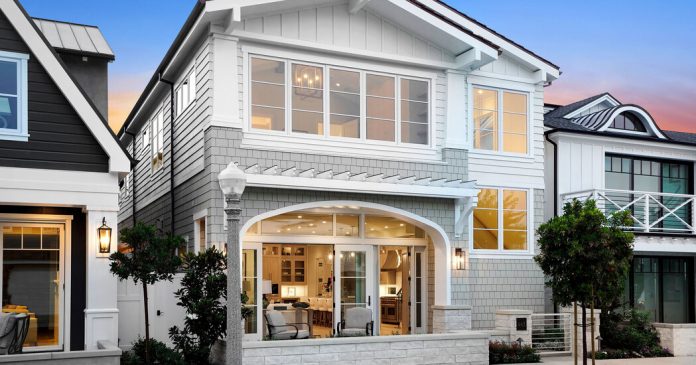 A new, craftsman-inspired four bedroom, three and a half bathroom home on 0.06 acre lot

This home is located in the Balboa Peninsula Point section of Newport Beach, directly across from Corona del Mar Bay. The neighborhood is family-oriented, with annual July 4th and Easter events. Just a few minutes' walk away is West Jetty View Park, a strip of water that includes the Wedge, a place known for its high waves and inspired by surf music legend Dick Dale's 1963 hit of the same name.

About a mile away is the ferry to Balboa Island, where vintage boats carry passengers over an 800-foot stretch of Newport Bay. John Wayne Airport is inland and is about a half-hour drive away. Downtown Los Angeles can be reached in about an hour.

Inside: A low brick wall with a gate separates the front terrace from the sidewalk. The front door leads into a living room with white oak floors that continue throughout the house. A fireplace made of floor-to-ceiling white stones is framed on one wall and flanked by built-in bookshelves. Glass doors at the front of the room open to the street-facing terrace.

The living area opens into a dining area and both are open to the kitchen, which has a waterfall island with a counter made of white stone and appliances from Sub-Zero and Miele. Next to the kitchen there is a home office with a built-in workplace and half a bathroom.

An open staircase, lit by a skylight, leads from the front of the lower level to the second floor. Turning left at the top of the stairs will take you to the master suite with a limestone fireplace and more storage space. The master bathroom, which connects the bedroom with a walk-in closet and dressing area, has a separate shower and bathtub opposite a double vanity.

Across the hall is a guest bedroom with its own bathroom. At the other end of the hall, at the rear of the property, there are two other guest rooms that share a bathroom, one with a built-in window seat.

The house has an Elan smart home system that allows the temperature, Lutron lighting and Sonos audio systems to be controlled from a phone, tablet, remote control or touch panel.

Outside space: A row of succulents lines the path from the street to the front door, and there is space for a coffee table and chairs on the street-level patio in front of the entrance. From the dining area at the back of the house, glass doors open to another terrace with space for a small seating area. A trio of fountains is embedded in gravel and framed by colorful flowers. The attached garage has space for two cars.

A six bedroom, six and a half bathroom farmhouse built in 1890 on five acres

This property, less than half a mile from Armstrong Redwoods State Natural Reserve, comprises five acres of flat land used as a fruit and vegetable farm by the current owner, a chef with restaurants in San Francisco and Berkeley. The house, one of the oldest farmhouses in the region, was renovated in 2017 and is now a popular location for weddings, writing and yoga retreats, and family celebrations. The Russian River, a major attraction in this part of the state, is a five-minute drive away, as is central Guerneville. Santa Rosa is about 22 miles away and San Francisco is a 90-minute drive.

Inside: An asphalt driveway leads from the street to the main house, which has a two-tier terrace with brick steps up to the entrance.

The entrance is right in the open plan living area, which has retained some original details, including a brick fireplace that separates the seating area from the kitchen. The ceilings have exposed wooden beams and one wall has wood paneling taken from a barn. There is a dining area with a window between the living area and the kitchen.

During the 2017 renovation, the kitchen received new cabinets and quartz countertops. The range is made of stainless steel and open shelves are at the back of the brick fireplace.

Two en-suite bedrooms are adjacent to the living area. The first has a private sitting area and a brick fireplace framed by an original carved mantelpiece. The second has an attic that is reached via a wooden ladder. Both bedrooms have access to the property.

On the second level there are four bedrooms with bathrooms. One has a private balcony while the other has built-in bunk beds. All of the bathrooms in the house were updated with walk-in showers and new sinks during the renovation.

Outside space: The front terrace is two levels, both with plenty of space for entertaining; There is a pizza oven on one side of the lower level. On the other side of the house is a second terrace with a hot tub, which is surrounded by a small teak terrace. There is a small lawn in front of the house; From there a path leads to the farm, where garlic, tomatoes, pumpkin, onions and chilli are grown. The driveway has space for at least four cars.

A renovated four bedroom, three and a half bathroom home built in 1967 on 0.1 acre lot

This house near the border between Marina del Rey and the Venice borough of Los Angeles is the residence of Kim Gordon, an interior designer who bought it in 2014 and renovated it for several years, with an emphasis on bringing nature inside. Abbott Kinney, a neighborhood of Venice known for its upscale restaurants and markets, is about 1 mile north, and Marina Beach, a quiet cove with a play area, is a five-minute drive away. Los Angeles International Airport is approximately 20 minutes away.

Inside: A wood and iron gate separates the public part of the front garden from a private area, which is laid out with grass and mature trees. The glass front door leads into an open living area. At the front, next to floor-to-ceiling windows that open onto the entrance courtyard, there is a room that the owner uses as a home office.

Further back in the main living room is a sitting area anchored by a fireplace with a wooden mantle made of distressed wood. In addition, there is a dining area, which is framed by floor-to-ceiling windows. To the right of the dining area is an open plan kitchen with Wolf appliances and a 10-foot island that seats four chairs. On the other side of the kitchen is a family room with space for a breakfast table and access to the back yard.

On the second level, four bedrooms are arranged around an open landing. The master suite is at the front of the house and has a large balcony overlooking the California pepper trees planted in the front yard. The main bathroom has a chromotherapy tub with air massage and a separate steam shower. The front-facing guest bedroom has its own bathroom, while the two bedrooms, facing the backyard, share a bathroom down the hall. Each room has its own balcony.

Outside space: In addition to the front garden with built-in benches and a wood stove, there are several outdoor areas at the back. The main dining area opens to an outdoor seating area with a built in fire pit and water feature. The pool has an attached waterfall-style spa and is surrounded by landscaping. On the other side of the yard is a paved area with space for a dining table and chairs. The attached garage has space for two cars.

Inflation Spreads to On-line Retail, As soon as a Haven of...

Kenneth C. Kelly, Champion of Desegregation in California, Dies at 94