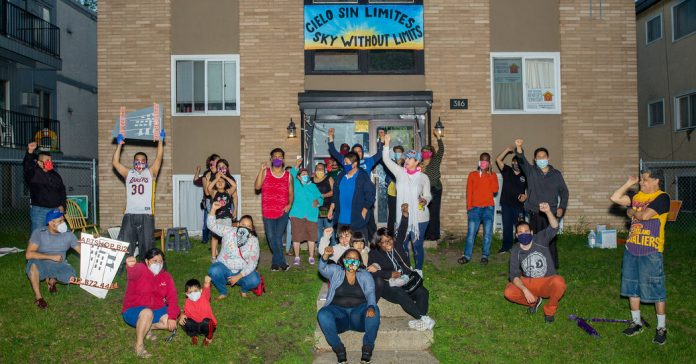 When Covid hit, many groups, including the National Apartment Association and the National Low Income Housing Coalition, called for a significant increase in government rental support. However, some tenant organizers discussed the possibility of another: a nationwide rent strike. "You are going to apply for a huge amount of money just to be able to repay your landlord?" asked de la Riva, talking about a stimulus package for tenants. "There is another balance of power that we are currently demanding from society."

Many people, both liberals and conservatives, viewed a rent strike as unreasonable or even dangerous. Political allies warned de la Riva and his co-director Jennifer Arnold not to support the rent cancellation campaign while Covid was a concern. The same happened to Susanna Blankley, an organizer of the Right to Counsel NYC Coalition. "I can't even tell you, not only the left told us it was unrealistic," she says, "they told us it was reckless. Reckless! But I think the point is that everything is actually is possible. Now we have an eviction moratorium. Anything is impossible until it isn't. I want to be in a world where we think about what we need, not just what we think we can get. "

In May tenant groups across the country coordinated a gigantic rent strike. Twenty thousand tenants in New York City and Los Angeles alone have committed to withhold their rent. In July, after the state's eviction moratorium expired, tenants in New Orleans blocked access to a courthouse to protest the eviction. Rent strikes and eviction blockades continued throughout the pandemic – just as they did almost 100 years ago during the worst economic collapse in the history of the modern world.

Throughout the 20th century, America's urban tenants organized against dropping rent and unsafe conditions, and won significant victories. Rent strikes, organized in the early 20th century in response to sudden rent increases and later the lack of heat and hot water, caught the attention of the Socialist Party, which had overlooked tenants as a potential revolutionary force. Socialist tenant leagues demanded permanently affordable housing that was supported by the state. In 1923 America's first public housing project was completed in Milwaukee under the direction of its Socialist Mayor Daniel Hoan. In 1930 the United States remained the only developed democracy with no federal housing obligation.

When housing construction and the labor market both crumbled during the Great Depression, the public housing campaign accelerated. In the early years of the Depression, thousands of tenants took part in rent strikes and blockades. The urban tenant movement became more militant and the violence of displacement met with fierce opposition.

When the marshals arrived with evacuation orders, the tenants hurled stones and bottles from behind makeshift barricades. Some attacked the officers directly and attacked them with sticks. A 1932 Bronx newspaper report recalls a scene where "police officers were scratched, bitten, kicked and their uniforms torn by tenants who refused to be evicted." In cities like New York, these efforts forced lawmakers to pass measures to regulate rents and start building public housing. Congress also responded by passing the National Housing Act of 1934 to curb a wave of foreclosures from the Depression era and the Housing Act of 1937, which established the country's public housing infrastructure. Today more than two million Americans live in public housing.

During the 20th century, tenant movements gained more concessions. By the early 1980s, around 200 cities, including Boston, Los Angeles, and Washington, had passed some form of rent control, but those advances were already being undermined. In the late 1960s, New York City saw an alarming surge in apartment abandonment due to landlords' inability to keep their buildings under rental control. In 1971, Governor Rockefeller revised the state's policy to restrict the city's ability to regulate its rents. The strict system of rent control in New York City was replaced with a new rent stabilization system that allowed landlords to increase rent by a set percentage each year. Legislators across the country passed laws banning cities from carrying out rental controls. The cities affected – such as Boston and Cambridge, Massachusetts – were deprived of rental control in 1994 by a state mandate; and Berkeley and East Palo Alto, California, contested the same way the following year – were significantly more progressive than the state lawmakers who directed their destiny. In 1961, nearly 1.8 million units in New York City – more than eight in ten homes – were under rent control. By 2017 there were only 21,751. Today around half of the city's apartments are rent stabilized.

‘The Massive Brief 2.zero’: How Hedge Funds Profited Off the Ache...