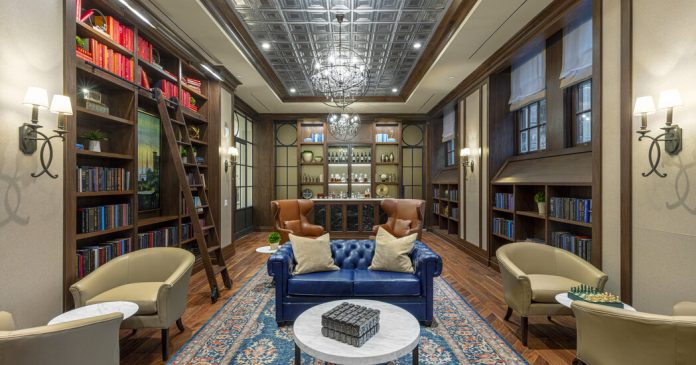 Condo-style extras are also a selling point at Watermark at Brooklyn Heights, a 275-unit hotel on 21 Clark Street that opened in early October.

The 50,000 square feet of facility include three restaurants, an art gallery and pool, as well as a deck with skyline views that extends over the roof of the building, the former Leverich Towers Hotel.

Known in 1928 for its four castle-like roof towers, the building was designed by Starrett and Van Vleck, the architecture firm behind Bloomingdale and other department stores.

The brick facade of the 16-story building has been protected as a landmark since the 1960s, so not much has changed. However, according to Watermark Retirement Communities, a national company that jointly developed the property with Kayne Anderson Real Estate and Tishman Speyer, few original details have survived. In 2017, developers paid $ 203 million for the building.

Watermark has restored a ballroom that Jehovah's Witnesses had divided into offices to become the W room, one of the complex's restaurants. On the balcony is the art gallery, whose first exhibition will be “Brooklyn Collected: Artists Next Door”.

According to David Barnes, the company's president, Watermark has spent $ 2 million on personal protective equipment for employees at some of its 62 complexes, which are located in 21 states. His mother lives in a watermarked property, although he hasn't been able to visit her since March. "We are very confident that we can create safe environments," said Barnes.

Of the 55 or so units previously rented in Brooklyn, none has yet withdrawn, although not all tenants are planning to move in immediately.

What You Must Know About NAR