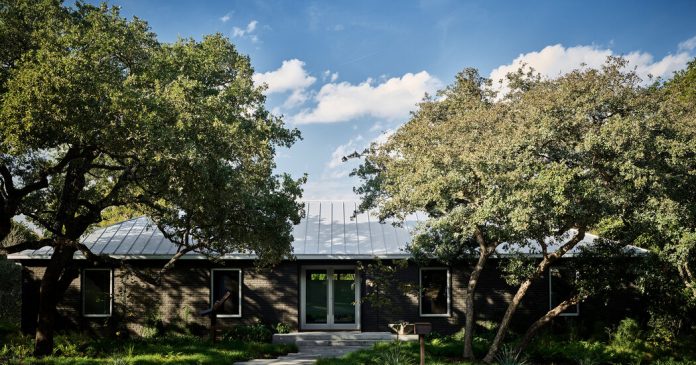 When Dacia and Lanham Napier toured Austin, Texas, with a real estate agent in 2015, they weren't looking for a home – they were looking for office space in the tech-centric city for Mr. Napier, CEO of investment firm BuildGroup and former CEO of Rackspace Technology.

The couple lived in San Antonio, about 80 miles south, but "I happened to mention to the real estate agent that Lanham's dream was always to be by a lake somewhere," said Ms. Napier, 49, a radiologist. "Well, she called me the next day."

The agent wanted to show them a house in the Tarrytown neighborhood, about three miles from downtown Austin. It wasn't exactly on a lake, but it was close by, with a back yard that descended to Taylor Slough, an inlet of Lake Austin that is part of the Colorado River.

Mrs. Napier was skeptical, but they went anyway to see it. And it hit a chord. They liked that the low brick house appeared to be a bungalow off the street, but descended to a second level buried in the hill. They also loved that it had access to the water and was just a short drive from the airport and the offices where Mr Napier wanted to work.

"It's pretty darn convenient for all of the things we do," said Mr. Napier, 50. "And I'll tell you what, it's a great neighborhood to walk around."

They didn't mind that the 3,600-square-foot house from the 1960s had been renovated in a style that was more traditional than the modern design they preferred. They had extensively renovated their home in San Antonio and knew they could enlist the same team – Tobin Smith Architect, Mark Ashby Design, Ten Eyck Landscape Architects, and Dagleish Construction – to remodel their second home.

The Napiers bought the property in June 2015 for $ 3.3 million. But instead of ripping out the leaded and stained glass windows, the moldings, and the fluted fireplace mantle right away, they decided to get a feel for the space while working on renovation plans.

"It was probably a pretty good mid-century house when it was built," said Tobin Smith, their architect. "But someone had done it in French, probably in the 90s. We cut out our work for ourselves."

When the Napiers moved out two years later to make room for the demolition crew, they had decided to paint the brick exterior, add a pool, and overhaul the interior, converting the four bedroom, three bathroom house into a house of four configured convert to bedroom, five and a half bathrooms and study for Mr. Napier. The idea was to create plenty of space for visiting friends and family, including the couple's 20-year-old son, Cade, who attends Yale University and 17-year-old daughter Avery, who attends Phillips Exeter Academy.

Mr Napier also planned to use the house to brainstorm with colleagues and wanted it to be multifunctional. "I think every entrepreneur deserves to have a conference room in their living room," he said.

His only requirement was a huge whiteboard in the dining room that doubled as a meeting room. His design team supplied a sliding board on oversized stainless steel wheels that is hidden in the wall and can be rolled out for work. "It's invisible until you pull the handle," said Mr. Smith. "And then this huge Lanham world dream comes out."

Ms. Napier took the lead for the rest. "I told them we needed a funky, fabulous mid-century bungalow with a contemporary art feel," she said.

Christina Simon, the lead interior designer on the project at Mark Ashby Design, wanted to recreate that feeling with vintage furniture, dramatic materials like pyrite wall tiles in the home bar and a custom-made silk carpet in the master bedroom, making smart use of Ms. Napier's numerous collections, including specimens of insects, pepper mills and serious art.

"Dacia is very much a collector," said Ms. Simon. "We knew vintage was going to be part of the business and we had fun finding these unusual elements."

A pair of snuggly, well-worn brown Roche Bobois leather armchairs were an early purchase that set the tone, she said. They installed the chairs in the downstairs den, where they also built a Charlotte Perriand-inspired wall unit that kept many of Ms. Napier's treasures.

"We call the Shelf of the Natural History Wall," said Ms. Simon, "because she loves to collect items like those tiny silver articulating bugs on stands."

With the help of Alexis Armstrong of Armstrong Art Consulting, Ms. Napier filled the house with works by artists such as Damien Hirst, Ed Ruscha, Ellsworth Kelly, Shirazeh Houshiary and Sol LeWitt. A monumental sculpture by Tony Cragg in the living room is so heavy that Mr. Smith had to reinforce the floor.

After vacating the house for nearly two years of construction and spending around $ 2 million, the Napiers withdrew in July 2019. This year, Mr Napier is even more grateful to have a house that doubles as a legitimate office.

"It turns out it's even better when there's a pandemic," he said, because he has multiple inspiring workspaces, room to pace on the phone and a whiteboard like no other. "I think the physical environment is important to all of us as humans."

Your Backyard Could Be Fairly, however Is It Ecologically Sound?