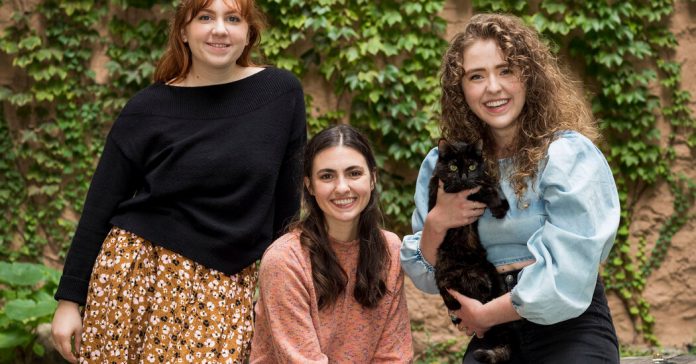 By June, things were looking up for Posey Bartol and Theresa Alexander, two actors who lost their jobs and their third roommate at the start of the pandemic. They had finally found someone to take over the empty bedroom in their Hamilton Heights apartment, their unemployment checks had come through, and after 90 days of rarely venturing out, they had started volunteering with the #OpenYourLobby campaign for Black Lives Matter protesters.

And then they got bedbugs for the second time in less than a year.

“We really did think the treatment seven months before had worked,” said Ms. Bartol, 23. “The worst part was that because of Covid, we had nowhere else to live while they did a second fumigation.”

They told their new roommate, Evangelia Pappas, 22, that they would understand if she wanted to move out immediately. Because they were on a month-to-month lease, they planned to start looking for a new place themselves.

But Ms. Pappas, an actor who works for Levain Bakery, surprised them by saying that she would stick with them. The roommates had established a good rapport in the month they had been together, but they hardly expected Ms. Pappas to wage war against bedbugs, especially as she had an easy out — two uncles in Long Island City with whom she had been living after moving to the city from Fresno, Calif., in January.

Over the next few weeks, the women cemented their friendship, bonding over their careers and shared bedbug trauma.

“We call Ev our Covid blessing,” Ms. Bartol said. “Me and Theresa found someone with the same amount of silly level as us. We can all laugh at ourselves and each other.”

The duplex apartment that Ms. Bartol found on StreetEasy, where it was listed as a one-bedroom — although it has three normal-size rooms with windows that could be used as bedrooms — was their other lucky break. Six blocks from their old apartment, it is roughly twice the size and has outdoor space (a backyard they share with the building’s super), but it rents for the same price: $2,500 a month, or $833 a person.

“We got so lucky, it’s wild,” Ms. Bartol said. “Our old place was much smaller than this one. No one lives in the closet, all the walls are real, and we have an outdoor space.”

Occupation: Actors in theater and film, plus side jobs: Ms. Alexander is a restaurant host; Ms. Bartol works as a babysitter; and Ms. Pappas processes event and online orders at Levain Bakery.
Missing their side jobs at the beginning of the pandemic: “As much as actors say they resent their other jobs, it was a big part of my social life,” Ms. Alexander said. “It was really hard not being able to go and greet my co-workers.”
New work: By the end of the summer, Ms. Bartol had found some new babysitting clients, but it has been difficult, she said, as many families don’t want babysitters who take the subway or live with others who do. Ms. Alexander landed a new job at a Midtown restaurant.
How they met: Ms. Bartol and Ms. Alexander performed together in a 2018 show at Theater for the New City. Ms. Pappas is a friend of a friend.

The women and Ms. Bartol’s cat, Bijou, moved in on July 15, after a fumigation that necessitated drying their clothes at high heat, sealing it in bags and vacating their first apartment for several nights. (They were able to stay at the Chelsea apartment of a family that Ms. Bartol worked for before the pandemic, as the family had moved out a few weeks before the end of their lease.)

They drew up a roommate contract stipulating that each would be responsible for her own portion of the rent for the duration of the lease. Their last roommate left without covering her rent when the pandemic hit, a big source of stress for Ms. Bartol and Ms. Alexander, especially because their side jobs had ended with the pandemic — Ms. Bartol’s as a babysitter for Broadway families and Ms. Alexander’s as a restaurant host. But perhaps more important than defining their financial responsibilities was a shared understanding of what they wanted their apartment to be.

“We talked about how we wanted to share a home,” Ms. Bartol said. “We’ve all lived with people who feel like strangers before. And even though making a family vibe is an investment, none of us would settle for anything less ever again. If not for Theresa and Ev, I don’t think I’d still be in New York.”

“Oh, my God, no,” said Ms. Alexander, 25. “And being actors, we all have the same job and aspirations. It really helps having people in the house who get it. I don’t know what state I’d be in if I didn’t have roommates who understood what this pandemic is doing to me socially and emotionally.”

“It’s nice to come home and have people you want to tell about your day,” Ms. Pappas said.

The women regularly lift their spirits with dance parties in the kitchen. They also help one another with auditions, which are done remotely these days.

“I think a lot of people had family wealth to fall back on during the pandemic and jobs they can do from home,” Ms. Bartol said. “We don’t have that, so it’s really important that we help each other. Even if it’s just singing together.”

Ms. Pappas recalled her first at-home audition. She had to sing and read on camera, but she had just returned from a day of packaging shipments for the bakery and felt so exhausted that all she wanted to do was sit quietly in her room. When Ms. Alexander and Ms. Bartol came to ask if she needed help, she turned them away.

“But then Posey came back and was like, ‘Do you need someone to read with you?’ And I was like, ‘Yes,’” Ms. Pappas said. “It’s like when family asks if you need help and you’re like, ‘No.’ And then you get over that hump and admit that you do.”

Despite the pandemic, the bedbugs and the difficulty of getting acting and other work in recent months, the women said they were happy they hadn’t given in to their families’ urgings to leave New York.

“We don’t even have bedrooms there anymore, but our parents were seeing New York on the news and were like, ‘Come home, the world is ending,’” said Ms. Bartol, who moved to New York from North Carolina four years ago, after graduating from high school.

“What they didn’t see were all the beautiful moments — we were out on the fire escape every day clapping, and then the protests happened,” she continued. “But I think they’ve finally taken a breath, realized that everything is going to be OK and have a lot of peace that we live with each other.”

“Going home — it was never appealing,” said Ms. Alexander, who is also from North Carolina and moved to New York three years ago, after college.

“Who knows what the city will be like in the coming months,” Ms. Bartol said. “Luckily, we all found each other, and we all feel like this is our home. Like, ‘I’m the best version of myself here.’”

Why Longfellow Is Betting on San Diego

What Type of Flag Can I Fly Outdoors My Home?

Manhattan Gross sales Market Is Poised for a Revival, Only a...