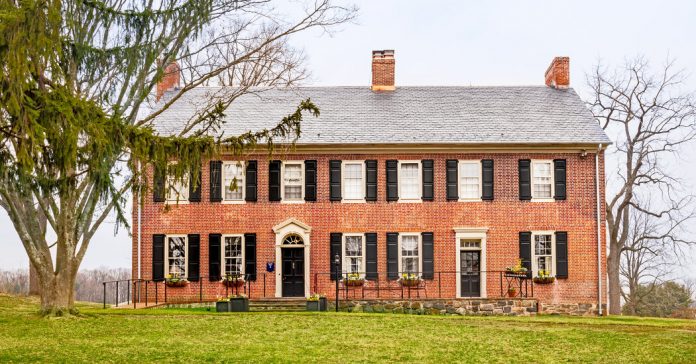 When Carol B. Cadou was appointed director and managing director of the Winterthur Museum, Garden & Library in Delaware in April 2018, she began planning a full immersion in the 978-acre former Henry Francis du Pont estate.

"When I got on board, the trustees asked if I would live on the property," said Ms. Cadou, 52. "Of course, I was absolutely thrilled to think about bringing my family to Winterthur."

But there was a problem: the house where she would live with her husband, Christopher Cadou, 55, a professor of aerospace engineering at the University of Maryland, and their children Lilly, 13, and William, 10, needed attention .

The federal-style brick building known as Chandler Farm, which Mr du Pont designated as the residence of the museum's director in 1958, has not been used by museum staff for a decade. "It was rented out," said Ms. Cadou as a private house, and it was as worn as the dog-ears of a popular novel.

When she arrived, the electrical, HVAC and fire alarm systems needed to be updated, and the interior needed a makeover. "It was almost overwhelming in its darkness, with old wallpaper on the walls and curtains that had seen better days," said Ms. Cadou. The house's furniture collection – reproductions of pieces from Winterthur's 1980s American decorative art – has been removed and moved to other buildings on the site.

Ms. Cadou hoped to update the house, which was built in the late 18th and early 19th centuries, to make it suitable both as a family home and as a place for entertaining museum guests. But she knew that there were few funds available for renovation. "We have so many other needs around Winterthur," she said. "We have 118 historic buildings and Chandler Farm isn't the only one that needs attention."

She asked for help from Thomas Jayne, a New York-based interior designer whom she had met in 1995 at an alumni event for the Winterthur program for American materials culture, from which they both graduated.

Mr. Jayne, who has seen the institution as an important source of inspiration for his work, was very interested in volunteering and called the house “a great opportunity to give back”.

While Ms. Cadou and Mr. Jayne began planning the interior renovation, the museum staff began upgrading the systems behind the walls. At Ms. Cadou's urging, they added a wheelchair ramp leading to the front door "so that anyone visiting Chandler Farm can come in through the front door."

Inside, they followed a design scheme that was inspired by the past but wasn't in it. "I really wanted to have some 21st century things in the house," said Jayne. “Carol and I both agree that tradition is part of a continuum. It's not just then and now; It's about how we can move forward with historical models. "

Mr. Jayne has dramatically brightened the interiors with paint and wallpaper. In the living room he made the walls pale pink and scanned a resist-dyed flower fabric from Winterthur's collection to produce blue and white decorative paper for the back of bookcases. He hung a contemporary photo of Larry Lederman from a milk barn on Winterthur's Farm Hill over a new sofa.

For the dining room, Mr. Jayne chose a reproduction wallpaper in surprisingly vivid colors from Adelphi Paper Hangings. "It's eighteenth-century wallpaper that gave the room a seemingly contemporary twist," he said. "That's part of our message: the past is surprising and unexpected."

The most bizarre is the entrance hall and the stairwell. "I came up with the idea of ​​building an 18th century printing room," said Jayne. "It was customary to stick prints on the walls and put decorative borders on them."

Mr. Jayne and his husband, Rick Ellis, a stylist, taped Winterthur-related pictures from the museum's archives like wallpaper on the wall before adding more paper that resembled picture frames. "It ranges from advertising for Mr du Pont's dairy to botanical depictions of the flowers that grow in Winterthur and a picture of my classmate in the White House," said Mr Jayne.

As for the furniture, Ms. Cadou mixed some of her own pieces with the museum reproductions, which she and Mr. Jayne recaptured from other buildings and reupholstered with new fabric. For a pair of armchairs that flanked the living room fireplace, they used green silk that Mrs. Cadou had salvaged from a dumpster in George Washington's Mount Vernon, where she used to work.

"Let's just say I've been famous for dumpster diving all my life," she said. "I see a dumpster and I want to know what someone is throwing away. Will it be a price?"

The total cost of the renovation, which was completed earlier this year after nearly two years of effort, was approximately $ 35,000. In early March, Ms. Cadou managed to hold an official event in the refreshed house – afternoon tea for the Dallas Founders Garden Club that Mr. Jayne and Mr. Ellis attended – before locking herself in for the pandemic.

Ms. Cadou, who still owns her previous home in Bethesda, Md., Said she looks forward to showing the house to more people soon and hopes the project will show that a new look to a house is not necessarily one requires a large budget.

"I hope it gives people a window into how you can take what you have and really make it work without too much hassle," she said. If you're creative with paint, wallpaper, and fabric, "you may have a lot on hand to use."