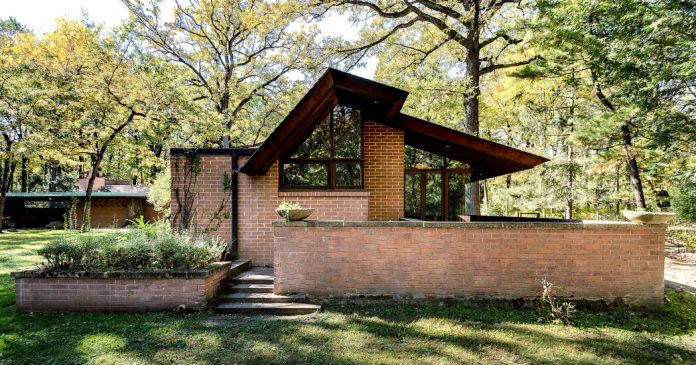 A four bedroom, three and a half bathroom home designed by Frank Lloyd Wright in 1950 on 3.55 acres with a swimming pool

This house was designed for a family named Carr and was later seamlessly added to by a second owner (there were only two). It occupies an area of ​​three hectares and is located on a nature reserve in the Glenview Park District, the Grove. Even so, it is only 15 minutes north of O’Hare International Airport. The trip southeast to the Chicago Loop takes less than 40 minutes.

Inside: The house connects to the wooded property with 17 French doors, many of which lead from the living room onto a narrow terrace that wraps around the north side of the building. The entrance foyer is a garden-like space with skylights, flat stone slab steps, a water feature and windbreak walls in which plants soften the transition between inside and outside. It leads you into a 37 foot social space with a vaulted ceiling loosely separated by a masonry pillar and with seating areas with fireplaces on either side.

To the left of the living area, as you enter, is a small U-shaped kitchen wrapped in mahogany cabinets with red-tinted stainless steel worktops. The adjacent pantry of the butler provides additional storage and work space as well as a sink. In addition, there is the 17 x 18 foot family room with glass walls and a view of the pool. The dining area next to the living room has been pushed out and has a solid partition and narrow shelves.

To the right of the living area, behind the conversation pit, is the master bedroom. The private bathroom has a mahogany and stone hot tub and a built-in planter with a living tree. There is also a walk-in shower, a mahogany vanity with two sinks, and a walk-in closet.

Three other bedrooms (one of which was the original master suite) and a second shared bathroom are in a wing that extends perpendicularly from the living room. Two of these bedrooms have direct access to the outside.

Outside space: The heated pool was added by the original owners in 1958. Parking is in a carport with two vehicles. Lots of oak trees enhance the property's privacy feel. An adjacent three acre property to the north is also available.

A two bedroom, two bathroom apartment in a converted 19th century townhouse across from Boston Common

This Beacon Hill home is in a federal-style brick building that once belonged to Christian Herter, Massachusetts Governor and Secretary of State in the Eisenhower and Kennedy administrations. In the 1970s, the single-family home was converted into a condominium with five residential units, each occupying a separate floor. This unit is located on the third floor and can be accessed via an elegant elliptical staircase or an elevator. It is less than half a block east of Charles Street, the neighborhood's boutique and café-filled shopping street, and about a mile west of Faneuil Hall Marketplace and the waterfront. Massachusetts General Hospital is half a mile north.

Inside: A small foyer opens onto a hallway. Turning right takes you to a large, wood-paneled room with a box-beam ceiling, an original marble fireplace flanked by built-ins, and two sliding windows (with original shutters) overlooking the Common. A 10 foot window area next to this room could be used for dining, or a dining table could be placed closer to the kitchen on the other side of the living room. The kitchen has pale Poggenpohl cabinets with stone countertops and a tiled floor with a brushed glaze pattern. The devices are Gaggenau and Miele.

At the other end of the hall, on the north side of the unit, is a master bedroom that is over 15 square feet and includes a fireplace and large window that overlooks the greenery along Branch Street. The private bathroom has a glass-enclosed shower and bidet. The fireplace in the guest room is furnished with original Delft tiles. The guest bathroom has a vintage-style vanity and a combined bath and shower.

Outside space: Parking is possible in a garage under the common.

Known as the Stratton-Cornelius House, this cedar-sided Victorian building in the historic King & # 39; s Hill neighborhood of southwest Portland is on the National Register of Historic Places. It was built for Howard Stratton, a prominent businessman who had a child with tuberculosis for whom a unique roll-top bed alcove was designed (and protrudes from the third floor). A later owner was Charles W. Cornelius, a doctor turned real estate developer.

The current owner, who bought the property three decades ago, added a green roof garage in 2008 and converted half of the basement into a residential unit.

The home is located in the Goose Hollow neighborhood, a short walk east of Washington Park, home to the Oregon Zoo, Portland Japanese Garden, and the International Rose Test Garden. Shopping and dining are just a few blocks away. Portland Timbers' football stadium, Providence Park, is two blocks east. Powell's City of Books in the Pearl District is less than a mile in the same direction.

Two thick double doors open to a foyer with a fireplace flanked by wall cabinets. Doric wooden columns frame a window niche in front of the foyer and the side entrance to the salon. A two-tone wooden staircase with paneled walls and a grove of gnarled spindles rises from the center of the room. A large, winding brass lamp is attached to one of the new posts. A Povey Brothers window and etched glass wall sconces provide additional light.

The front and rear salons are divided by another set of pillars and hung with brass chandeliers with glass balls. The front saloon includes a corner window with decorative glass and a window seat. The rear living room has a fireplace with a mirrored overcoat. Behind it is a dining room with a box-beam ceiling, a built-in sideboard and a fireplace with an intricately carved mantelpiece. The original red oak floors were milled from Russian shipping containers and inlaid with walnut.

The 20th century kitchen runs along the back. It features glossy wood cabinets, white floor and wall tiles, and a vintage cast iron stove. A long central island is covered with a granite slab. Brass chandeliers with green glass shades are reminiscent of Victorian desk lamps. Half a bathroom is to one side. Another door leads to a rear hall and a service staircase.

On the second floor, four bedrooms surround a central hall. The largest has a bay with three windows, a semicircular bench, a fireplace, a walk-in closet with a sink, and access to an elliptical balcony. Next to it is a corner room with a private bathroom with a glass shower. A third bedroom has windows on three walls and a fireplace. All rooms have wooden floors and multi-arm brass ceiling lights. They share a bathroom with a vintage claw-foot tub with a shower head and a vintage marble sink. There is also a wood-paneled room on this level with an eyebrow window equipped with connections for laundry equipment.

On the third floor there are three further bedrooms, one of them with an attached bathroom. There is also a living room, a full bathroom with a claw-foot tub, and a kitchen.

The finished basement has its own outside entrance. The basement unit comprises a bedroom with a walk-in closet, an office, a bathroom with a vintage bathtub and shower head, and a laundry room.

Outside space: A deep porch surrounds the side overlooking the green roof of the garage. The back yard includes a flagstone area with a fire pit, outdoor shower, and a very old maple tree. It was set up for a water feature and a sauna.

There’s No Higher Time to Clear the Air