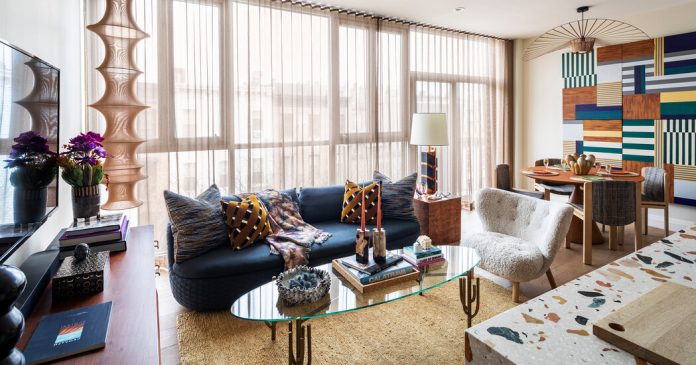 When Lindsay Weiss began renovating her home on the edge of Carroll Gardens in Brooklyn, this wasn't just an opportunity to give the place a new look – it was a chance to take a clean break from a failed relationship.

Ms. Weiss, an architect, bought the 922-square-foot, two-bedroom apartment with her boyfriend in 2008 for about $ 735,000 and filled it with a mix of furniture they each owned and new pieces they acquired together. They separated by 2011 and Ms. Weiss bought her ex, who left almost everything behind.

For several years she focused on her job, doing her best to live in a house that cost a lot but did not make her happy. "I hated my furniture," said Ms. Weiss, 41.

"I do this every day and help clients make these decisions, but it's difficult to pull the trigger yourself," said Lindsay Weiss, architect and founder of Weiss Turkus Projects.Recognition…Robert Wright for the New York Times

After founding Weiss Turkus Projects with Noah Turkus, an interior designer, in 2014, she began to dream of making a radical change at home and developing ideas for design together with her new business partner. As an architect with varied tastes, however, she found it difficult to decide on one course of action.

"I didn't know how much I wanted to spend. I didn't know what I wanted to do. It was such a daunting task," said Ms. Weiss. "I do this every day and help clients make those decisions, but it does is difficult to pull the trigger yourself. "

By 2017, Mr Turkus insisted it was time to take action. To get things moving, he suggested breaking the renovation down into a series of manageable decisions. "I thought, 'Let's get the flooring," said Mr Turkus, 41. " Once we have our flooring, we're good to go. "

Mrs. Weiss chose a wide-planked European white oak from Walking on Wood. Then, as if to prove to herself that there was no going back, she cleaned up her apartment and sold or gave away almost every piece of furniture except her mattress. "I just tore the plaster off," she said. "I thought it was a good time to say goodbye to everything."

Soon afterwards, Ms. Weiss decided to replace the swing doors in the bedrooms with pocket doors and tear out the cupboards to make room for custom-made cupboards. She stayed with a friend for a couple of weeks while much of the apartment was gutted and moved back in when the new floors fell off. She carried her mattress from room to room so as not to be in the way.

Another early decision that inspired a lot was the material for the kitchen counter: Dzek Marmoreal, a terrazzo with large chunks of marble in different colors.

"I tried to use it in our projects, but nobody would really try," said Ms. Weiss. "It had the color palette for my entire apartment, although I hadn't noticed it at the time. It created the conditions for any other choice."

She decided to keep the existing kitchen cabinet frame but updated it with new painted doors. And when considering what color these doors should be, Mr Turkus had an ideal choice: Benjamin Moore's Regent Green, who picked up one of the colors in the counter.

With every decision – and with Mr Turkus providing a steady stream of ideas and encouragement – Ms. Weiss became more encouraged and looked for ways to add character to the apartment by drawing on her network of craftsmen.

For the foyer she commissioned Lillian Heard, a decorative plasterer, to finish a wall with speckled waves of terracotta orange. In the guest room, which doubles as a study, she covered the walls with bright green, flocked Moooi wallpaper from Arte that was supposed to resemble sloth skins. For a closet in the master bedroom, she worked with Peg Woodworking to create doors that were covered with intricately woven cotton cord.

And when she needed a monumental piece of art to anchor the dining area, Ms. Weiss visited her mother Dale Weiss, a painter in Los Angeles. "I brought a piece of Marmoreal home," said Ms. Weiss. "I picked out a few acrylics that would go with the palette and just told her I had to fill the whole wall."

Most of the work was done in the summer of 2019, but by then Ms. Weiss and Mr. Turkus had finally gotten going. So they went ahead and added art and accessories. "It's like a snowball rolling down a hill," said Mr Turkus, "taking on more and more and getting so much bigger."

They ended up considering the apartment completed in February, just in time to embark on the pandemic. At that point, Ms. Weiss had spent about $ 200,000.

Mr. Turkus seems to be just as satisfied with the result as Ms. Weiss. "I was very excited to see her turn into a decorator because so many architects don't have these skills," he said. "She has exceeded my expectations infinitely."