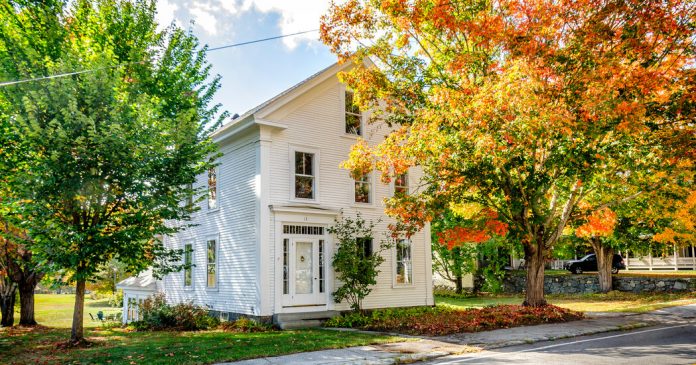 A four bedroom, three and a half bathroom farmhouse built in 1845 on 0.29 acre lot

This house is on Main Street in Center Sandwich, a neighborhood in the historic city of Sandwich about two hours north of Boston. Squam Lake, which shot scenes from the 1981 film "On Golden Pond," and has a beach open to residents only, borders the southwest corner of town. The White Mountain National Forest is just to the north. The Sandwich Center has a restaurant, library, post office, two art galleries, a Shaker chair workshop and a school for kindergartens up to sixth grade. This home is a short walk from everyone. It goes back to Quimby Field, a preserved green space with sports areas.

Inside: The house, which appears to have expanded over generations, is a collection of volumes with gable roofs, including the original barn (now a garage with an upstairs recreation room). Up front is a foyer with a spiral staircase set off by red chinoiserie wallpaper and a drawing room with wide pine floorboards and bookcases flanking a window with a bench. Behind it is a combined living and dining room (with more built-in components, wider, antique floorboards and a wood stove). The adjoining kitchen is wrapped in white cabinets and emerald tiles, with space for a table in the center. From there, a staircase leads you down to a ground-level winter garden with French doors that lead to the meadow-like backyard. A nearby staircase leads to the second floor.

The master suite extends from the front to the back of the house. At one end is a bedroom with floral wallpaper; On the other side there is a living room or an office overlooking the kitchen. Between these rooms there is a walk-in closet and a bathroom with a shower and two sinks along a private hallway.

Also on the second floor is a guest room with striped blue wallpaper and a private bathroom with a combined bathtub and shower.

A door on the second floor leads to the upper level of the barn garage, a finished, double-height, insulated room with platforms, paneled walls, and rough-hewn beams.

Another two bedrooms are on the third floor. They have splattered floorboards and are connected to one another. One is paneled and has shelves and storage cabinets painted green; The other has wooden beams, low cabinets and a bathroom with a shower. There is also an unfinished basement.

Outside space: The back yard flows into Quimby Field. The garage has space for two cars parked next to each other and offers additional storage space.

This home was designed by an architect for his own use and is located at the foot southeast of downtown Santa Fe, approximately eight miles from the plaza. It's in a 1970s subdivision called Overlook on the edge of a national forest between Ponderosa pines and rocky outcrops. The view is said to be especially spectacular at sunset, when the mountains to the east are painted with pink and purple rays from the west. Stargazing is top notch here too.

Inside: About half of the area is taken up by a large room with a vaulted wooden ceiling with exposed half-timbering and a long eastern glass wall. An open kitchen with wooden cabinets and counters and wall paneling made of Talavera tile sits in one corner of the room and includes new stainless steel appliances and an angled breakfast bar with wooden tops with natural edges. A wood stove is located near the west wall of the room.

The master bedroom is to the right of the central hall on the south side of the building. Casement windows wrap around a corner from floor to ceiling. In the en-suite bathroom, Talavera tiles adorn the vanity and walls, and there is a large walk-in shower with a window.

The guest room is directly across from the central hall on the north side and has the same window configuration. It is served by a bathroom with colorful tiles and a combined bath and shower.

A small upper level consists of a hallway on open shelves that leads to a hexagonal meditation room surrounded by small square windows and covered by a translucent plastic dome. There are also two attic storage rooms and an unfinished basement.

Outside space: A deck steps down from the northeast side of the great room. A cistern collects rainwater.

A two bedroom, two bathroom home on the Cumberland River on 0.32 acre lot with a woodworking studio

In the 1990s, this wood-sided house in northeast Nashville belonged to Marty Stuart, a country and bluegrass musician whose most popular song, which he wrote with Ronny Scaife in 1991, is "The Whiskey Ain & # 39; t Workin". Mr Stuart and his wife, country singer Connie Smith, sold the property to the current owners in 2001 after decorating it with antique consoles, stained glass and other architectural features from around the world. They also expanded the outside areas and built a retaining wall out of rock.

The house, which was expanded from a two-room fisherman's hut in 1950, is about 20 minutes from downtown and 10 minutes northwest of the Grand Ole Opry. The dock was washed away in a flood in 2010 and could be legally replaced. (The property is on the second highest point on the street, but flood insurance is required for a mortgage.) The General Jackson Showboat paddles past regularly.

Inside: A ramp built and easily removable for the comfort of a dog with hip dysplasia leads to a late 19th century front door with hand-embossed hinges and diamond washers. It opens to a redwood-paneled interior with a tiled floor entrance hall and a wall of hammered copper squares.

Behind it is a living room. Mr. Stuart added the stone fireplace, the mantelpiece cut from a beam that had been on his grandfather's Mississippi farm. Carved consoles fill the corners of the entrance to the dining area.

If you go to the back – the river side of the house – the kitchen is on the left. It features an island with a granite top and stainless steel appliances. The wooden cabinets were specially made for the compact space.

Turning right from the front door takes you to the master suite, which includes a bedroom with hardwood floors and French doors that open to a terrace, as well as a bathroom with double sinks and mirrors, a walk-in terrazzo shower and toilet.

The second bedroom is between the kitchen and the winter garden. It has a built-in wardrobe with mirrored doors and a bathroom with an antique vanity and a glass-walled shower.

The winter garden is an enclosed part of the back porch with wooden floors, a sloping ceiling and a fireplace with a mantelpiece supported by two consoles.

Outside space: The house has several seating areas with river views on different levels. The most important is the wide, covered aft deck, which is accessible from the living room, the sun terrace and the master bedroom. A second deck is to the side of the house and a third is in the basement. Grass is planted behind the retaining wall and steps lead down to the former port area. Parking for two vehicles is in a carport on one side of the house. On the other side is the extended woodworking workshop.