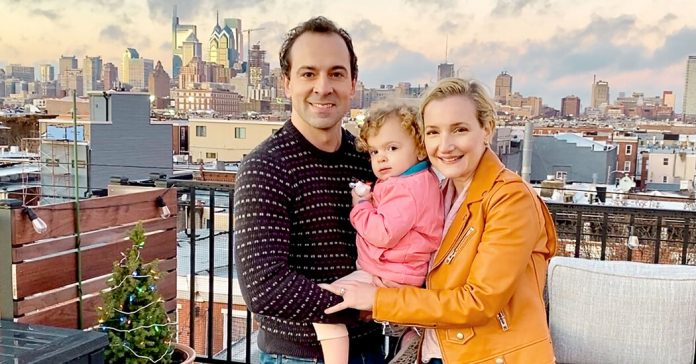 One shouldn't forget to mention the playroom's piece of resistance: the coffee table. Mr. McClure made it from a submarine door that starred in the plot of Lost, a favorite in the Lakis-McClure household.

The couple were lucky enough to be in California when Lost was wrapped and there was an auction of items from the show. "So we bought the door for our year-long wedding anniversary and I drove it across the country," said McClure.

He and Ms. Lakis did the rehab work on the house themselves, room by room, with help and tutorials from Mr. McClure's father, Bob, a building contractor, and his best industrial arts teacher in the high school, Jim Africano, who was the best man at his wedding in 2009.

The renovation, which was completed in autumn 2019, took nine years. But don't blame Mr. McClure and Ms. Lakis for the rate of dilation. They are very practical and very task oriented. It's just that between swapping lath and plaster of paris for sheetrock, installing a light-encased ceiling of pressed sheet metal in the dining room, and getting rid of the birds and bees mentioned above, they've sometimes been on the road for two years. Or Mr. McClure had a job on Broadway. Or they had a baby, Sadie, who just turned 2.

All in good time. Shortly after purchasing the home, the couple came across four centuries-old windows at an architectural salvage store in Lancaster, Pennsylvania. Wouldn't it be cute, they thought, to build a closet and put those windows on it? They brought their find home, where it lay for six years.

Sometime between the end of his Broadway run in “Beetlejuice” (end of September 2019) and the start of the world premiere run of “Mrs. Doubtfire ”in Seattle (two months later), Mr. McClure finally built the closet. It now includes, among other things, an Avenue Q-themed tea set that he and Ms. Lakis made in a craft store while touring the show.

These Actual Property Sectors are Most at Danger of Obsolescence from...

Home Looking in Gibraltar: A Nook Townhouse on Fundamental Avenue for...