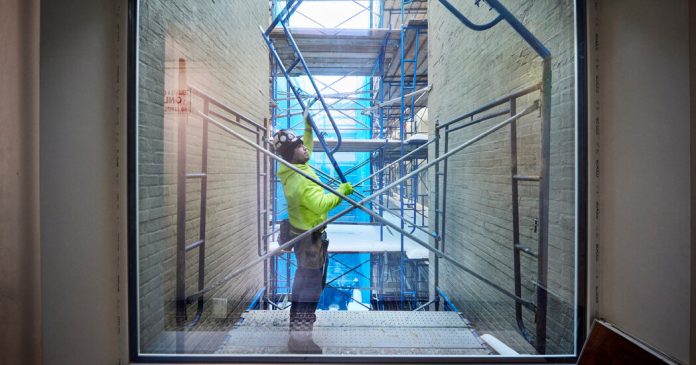 A plan to upgrade a cluster of nine unremarkable Brooklyn apartment buildings doesn't usually deserve a second look. However, this is not a quick fix. The project called Casa Pasiva is intended to be a new model for the sustainable redesign of the city's housing stock.

Sleek new skyscrapers made with the latest energy efficient building materials like solid wood may look impressive, but when it comes to solving New York's climate crisis, the real challenge lies in the city's decades-old structures.

More than 90 percent of New York's buildings will be standing by 2050 today, and nearly 70 percent of the city's total carbon emissions come from buildings. Taken together, these facts suggest that the fate of these nine nondescript buildings in Brooklyn and other similar buildings is critical to emissions reduction.

Instead of demolishing older buildings, owners and developers are developing ways to retrofit them with the latest environmentally friendly technology.

Casa Pasiva, a $ 20 million retrofit project in the Bushwick neighborhood, aims to be a pioneer. The developer behind the project is bringing an aging collection of buildings up to date by essentially turning them upside down without the need for tenants to move. Inner pipes, radiators and heating ducts will be removed or sealed, and a new facade on each building will cover a new all-electric heating and cooling system.

The project is overseen by the non-profit RiseBoro Community Partnership, which owns the structures. When Casa Pasiva is completed next summer, the buildings will meet a strict passive house standard, a modern building convention that, thanks to its airtight exterior, significantly reduces heating and cooling costs. The fading brick and concrete walls of the Casa Pasiva buildings will be buried under a white, sculptural surface that RiseBoro says will help cut energy bills by 80 percent.

"Our mission is long term affordability and low energy consumption is a stabilizing force," said Ryan Cassidy, director of sustainability and construction at RiseBoro. He estimates the retrofit project, the first of its kind in New York, will cut energy bills by $ 180,000 a year. "It's good for the environment, but it's also good for our budgets."

Casa Pasiva received $ 1.8 million in funding from RetrofitNY, a program funded by the New York State Energy Research & Development Authority. The agency is investing around 30 million US dollars in retrofitNY projects. Efforts to spur the development of low-cost, scalable retrofit technologies and create a market for energy efficiency improvements will come into effect with the enactment of tough city and state laws attempting to reduce CO2 emissions in buildings.

"Basically, RetrofitNY is about finding a leaner, more modular, and more efficient way to achieve deep decarbonization in housing," said Janet Joseph, senior vice president of strategy and market development for the agency.

The city and state of New York have focused on buildings to deliver significant carbon savings, such as the state's goal to reduce greenhouse gas emissions by 85 percent by 2050.

A measure passed last year under the city's Climate Mobilization Act stipulates that owners of structures with an area of ​​at least 25,000 square meters will often have to make significant savings in CO2 emissions or pay substantial fines from 2024. The legislation affects 50,000 of the city's approximately one million buildings, including a significant number of residential buildings.

"There is now a laser focus on reducing carbon emissions from the built environment in New York like never before," said John Mandyck, executive director of the Urban Green Council, a nonprofit advocacy group.

The council estimates that the cost of complying with all laws in New York will reach $ 20 billion, creating a huge market opportunity for contractors and unions and potentially 141,000 jobs and encouraging the development of new technologies and business models for building upgrades.

Affordable housing providers will be exempted from emissions requirements through 2035, but an affordable way to increase energy efficiency and reduce costs would be welcomed by property owners looking for more financial stability, said Jolie A. Milstein, president and executive director of the New York State Association for Affordable Housing, a trading group.

"Everyone is looking for new ways to improve the affordable housing stock," she said. "Our goal is to make everything climate-neutral."

Casa Pasiva was the idea of ​​the architect Chris Benedict, a long-term partner for passive house projects with RiseBoro. She was inspired by Energiesprong, a Dutch process that uses standardized, pre-fabricated building panels with built-in heating and cooling systems to upgrade older buildings. In the United States, and especially in New York, the great variety of apartment types and the different climates make the standardized Dutch approach impossible.

Ms. Benedict had to redesign the Casa Pasiva system from scratch. Each of the 146 apartments will have wall-mounted electric heating and air conditioning connected to a system of ducts and refrigerant lines that meander along the walls and eventually connect to an energy recovery fan, a rooftop machine that purifies and air circulates.

The new facade, which is up to 20 cm thick over the existing exterior, will consist of a barrier to prevent the flow of air. rigid insulation panels; Piece; and a self-cleaning finish, Lotusan, which is designed to wipe away water by imitating lotus leaves. Ms. Benedict successfully campaigned for a change in the city's building code to allow additional external cladding.

"When I first looked at how to design the wall, it was like a big puzzle," she said.

Tenant benefits go beyond energy savings. The facade is thicker, airtight and watertight, which means improved air quality – it is constantly circulated due to the narrow outer shell – less noise from outside and fewer pest and mold problems. Electric induction cookers reduce indoor air pollution and the apartments are given extra space by removing radiators.

The future administration of President-elect Joseph R. Biden Jr. has made clean energy retrofit projects a core part of its $ 2 trillion climate change plan, with the goal of retrofitting four million buildings in four years. But even this aggressive pace wouldn't curb emissions enough to meet the Paris Agreement's goal of keeping temperature increases below 1.5 degrees Celsius, said Martha Campbell, builder at the Rocky Mountain Institute, a Colorado organization that focuses on sustainability Globus is concentrated throughout Europe.

The nation would have to retrofit three million homes a year to meet the Paris Agreement's carbon reduction targets, she said. To get a feel for the work and the scale of such an accomplishment, approximately 900,000 new homes are built in the United States annually.

The Casa Pasiva approach is one of many that builders and engineers are studying through major efforts like the Advance Building Construction Collaborative, which Ms. Campbell described as an "opportunity to address delayed maintenance issues without going deep into those buildings."

Energy retrofit projects have been a focus in many climate plans, but funding for such projects did not always follow suit. Landlords and builders support reducing emissions, but the New York Climate Mobilization Act approach, for example, can prove punitive and somewhat confusing, said Zachary Schechter-Steinberg, vice president of policy for New York's Real Estate Board. a real estate trade association.

Ms. Campbell fears that some frustrated owners could simply pay the fine and skip the renovation, essentially throwing away capital that could be steered towards energy efficiency investments.

To solve the problem, the Urban Green Council and other groups have proposed putting in place an emissions trading system that would allow owners to pay heavy fines for investing in energy efficiency for other buildings, especially affordable housing. Technology such as that developed at Casa Pasiva could be one way of resolving the separation.

"We need to get 100 more projects off the ground and 100 more Chris Benedicts to work on," said Ms. Campbell.