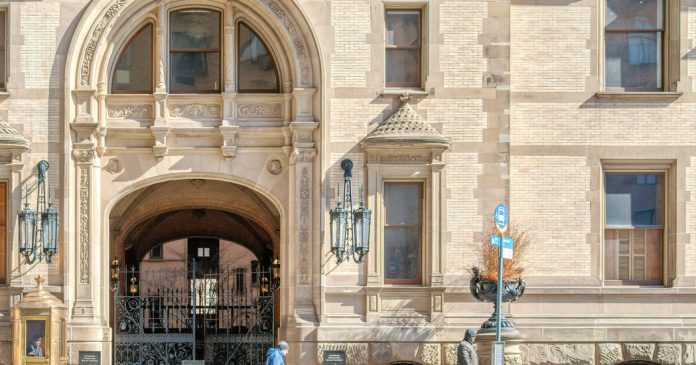 Nothing could be simpler than the purpose of a building's door – to let people in. But Andrew Alpern immediately complicates things in the introduction to his lavish new book, Posh Portals: Elegant Entrances and Ingratiating Housing Interventions for the Wealthy in New York City (Abbeville Press).

“A successful entrance to the apartment building has to fulfill several functions, all of which have to be carefully balanced,” writes the lawyer, architect and architectural historian Alpern. It needs to welcome those who have legitimate businesses in a building and keep everyone else from approaching. And even if a door locks itself in, it reveals this. "Almost by default, the appearance of the entrance tells the visitor and casual passers-by the status of the residents and some of their collective tastes."

With its ornate title, the detailed photographs by Kenneth Grant and the bizarre watercolor drawings by Simon Fieldhouse, “Posh Portals” is a sweet and envy generator for coffee tables.

The numerous buildings date mostly from the period between the late 19th century and World War II, when they were no longer built like this, with their segmented archways, frilled columns, and wrought-iron gates patinated foliage. Some of the entrances have terracotta figures that support canopies. other lamps with huge, milky globes. Still others are flanked by urns planted with evergreen plants, or crowned by Juliet balconies, on which no one should ever stand soliloquizing themselves, or with waterproof canopies that protrude like tongues.

Posh Portals begins with the Dakota on the Upper West Side, a pile from the gilded age of 1884 adorned with towers and gables and marked by tragedy. The first luxury apartment building in New York was designed to discourage upper-middle-range townhouses from living vertically by offering stairless comfort, great amenities, and a citadel-like sense of size. Even these lures didn't make it easy to sell. "For such an unusual building, it had to have an impressive entrance," Alpern said in a recent telephone interview.

This entrance is a barrel vaulted arch that leads to a huge courtyard, where carriages can drop residents off at one of the four corner lobbies and turn around. The courtyard of the Dakota also supplied the rooms that opened up with light and air.

Portals were also calling cards for bourgeois houses. Nineteenth-century developers embellished them to differentiate the buildings from tenement houses, and created more humble entrances for tradespeople or servants who might be meters from the main buildings.

Names were carved over doors, reminiscent of Sir Walter Scott novels like "Ivanhoe" and European Grand Tour destinations like the Acropolis. Later, in a kind of reverse snobbery, some of the most beautiful buildings were only known by their street numbers. "When you talk to real estate agents, they won't even mention the street," Alpern said. "They will only be talking on 998 or 740," referring to addresses on Fifth and Park, respectively.

As New York apartment buildings became leaner, architects lost the inclination to concern themselves with their facades, and you won't find anything modernist in Posh Portals. Richard Meier's millennial Perry Street towers, for example, are "very grandiose, incredibly expensive, very luxurious, but in my opinion they don't feel comfortable," said Alpern.

But he hasn't completely given up on the 21st century. "Posh Portals" features several of Robert A.M. Stern, an architect who indulges in materials and ornaments on a scale not introduced in New York since Rosario Candela's Art Deco creations. Prominent and plutocratic 15 Central Park West (2008) and waterfront 70 Vestry Street (2018) – with a drivable courtyard that's no less a selling point today than it was when the Dakota was built – are both in the book. It also makes goo-goo eyes at 135 East 79th Street (2014), which was designed by William Sofield with an arched, two-story entrance flanked by trellised pear trees that have been hand carved in limestone.

What are the requirements of traditional portals in the age of accessibility ramps, surveillance cameras, and touchless access technology that keeps viruses at bay?

Daniel Lobitz, partner at Robert A.M. Stern Architects said ornament was always useful for performing the levitation trick of making entrances both friendly and forbidden. A beautiful front door with a voluminous metal grille – "it's a security feature, but at the same time a decorative feature." (If only security cameras were designed to blend more seamlessly, he complained.)

A pair of glowing LED lanterns made of bronze and lead glass, which flank an entrance door, also create a feeling of a safe home “that goes back to the early days,” said Lobitz. He described the exterior of the building as a flowing space that blends in with the public space, illuminating the sidewalk behind the entrance, and inviting pedestrians to come by to be in its orbit.

Mr. Sofield also takes public experience into account. He personally carved the limestone trellis at 135 East 79th Street and added an owl and peacock to the branches, in part to amuse the people who were standing at the bus stop outside. (You have to work quickly while the stone is still damp, he said of the unfinished mouse in the composition.)

Nor did he stop at the service entrance, which he designed with the same black-lacquered elegance as the doors of the retail store on East 78th Street. "That's because I and my staff are escorted to the service entrance," he said. "There is a level of kindness around them, mostly because of the way I was treated."

I stepped back from the positivity celebrated in Mr. Alpern's book and invited Andrew Dolkart, Professor of Monument Preservation at Columbia University, to comment on the portals of buildings in my Upper Manhattan neighborhood. We looked at photos of late 19th century brownstones with their separate artisan entrances at the base that led into the kitchens of single-family homes (until many were converted into garden apartments).

Mr. Dolkart identified a brown stone with lush figures as an 1890s tenement house that likely hired immigrant stone carvings to attract residents as well as wealthier property developers. "The carving could be a little coarser and the materials of lesser quality," he said.

Such buildings also often have names that may be inspired by the European birthplace of the owner or a family member. "When you see a tenement house called Bertha, you can be sure that the developer's wife is called Bertha," said Dolkart.

In the economic chaos of the 1970s, some rows of tenement houses were scooped up and combined into individual structures with a dominant entrance. Mr. Dolkart was looking at the main portal of a triplet on Manhattan Avenue on West 122nd Street that had been reborn as a building called Angelou Court. (It was probably named in honor of Maya Angelou, who owned a house on West 120th Street.)

"Look at how wonderful it is," he said. "Three small, spindle-shaped pillars that carry this rather heavy coat of arms and carve beautiful leaves around the door."