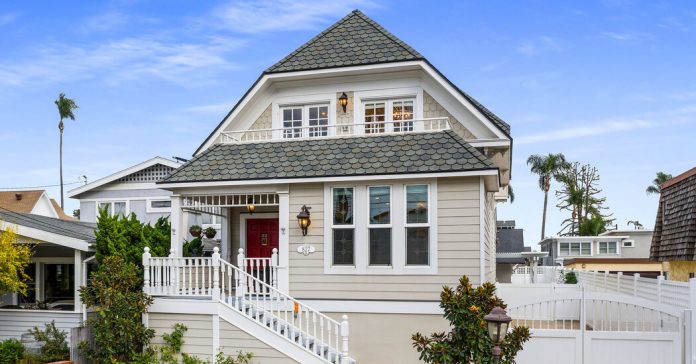 A five bedroom, three and a half bathroom Victorian home and one bedroom, one bathroom guest house on 0.1 acre lot

This property includes two buildings: the Thompson Grotenstein House from 1888, which was recognized as a landmark by the Coronado Historical Association in 1984, and a Craftsman bungalow from 1910 that serves as a guest house.

It is less than half a mile from Orange Avenue, one of Coronado Island's main shopping streets, and just blocks from the Coronado Municipal Golf Course, a popular public golf course that opened in 1957. Coronado Shores Beach is about 1 mile away.

Inside: The front yard is landscaped with flowers, a citrus tree, and brick paving that leads to stairs that lead to the main house entrance.

The foyer has high ceilings and a curved staircase. To the right is a combined living and dining room with original moldings, a quartz-framed fireplace and lights inspired by the late 19th century.

A kitchen with a gas fireplace and stainless steel appliances leads through the dining area. To maximize space, the vendors added an angled island that turns this part of the room with its window seat into a cozy breakfast nook. Behind the kitchen is an area with additional storage space and a large wine refrigerator.

In the 1970s the house was raised and a basement floor with three bedrooms and two bathrooms (one with a combined bath and shower and the other with a shower with subway tiles), a workshop with a black and white floor, was added and a laundry room.

The top level of the home is configured as a large primary suite with a fireplace, walk-in closet, and balcony with views of the Hotel del Coronado in one direction and downtown San Diego in the other. The private bathroom has a bathtub and a separate shower. An additional room on this floor could serve as a guest room or children's room. It is currently used as a home office and craft room.

The Craftsman style guest house has a living room, bedroom, bathroom with a claw foot tub, and kitchen fitted with new appliances.

Outside space: The terrace between the two houses is laid out with stone and grass and has a pergola-covered area with a fireplace, a built-in barbecue and an outside TV. The driveway has space for two cars.

A 1925 Mediterranean style home with three bedrooms, three bathrooms and a one bedroom, one bathroom guest house on 0.1 acre lot

This accommodation is located approximately thirty meters from the Chateau Marmont and offers views of the historic hotel from a balcony on the second floor. The seller is the founder and owner of Palisociety, a hotel group with properties in Los Angeles and Miami. His renovation of the house was inspired by hotel design.

Sunset Strip attractions such as the Comedy Store and Whiskey a Go Go are just 1 mile from the property. The heart of West Hollywood is a five minute drive away. Studio City is 15 minutes away.

Inside: Most of the house is hidden by tall hedges; Steps lead from the sidewalk through an arched gate to the front door.

Behind the entrance is a living room with walls painted in sage green, a color that reappears throughout the house. Exposed beams run across the ceiling and a fireplace is covered with a wrought iron screen. On the left side of the room is a door to a cave that can be used as a guest room. The ceiling is covered with a sage-green wallpaper that mimics the effect of pressed metal.

To the right of the front door is an open dining and kitchen area with a central island with a butcher's block counter and built-in cupboards painted white.

In the center of the house, a staircase with a wrought iron railing leads to the second floor where there are two bedrooms: a guest bedroom with en-suite bathroom and a primary suite with a bedroom, sitting area and bathroom with a deep bathtub and glass-walled shower . Off the seating area is the balcony with a view of the Chateau Marmont and the Sunset Strip.

To the left of the main house is a guest house with a kitchenette and a bathroom.

Outside space: The living room, dining area, and den all have access to the back yard, which has a built-in fireplace and a brick patio that is covered by a wooden roof. The driveway has space for two cars.

A new five bedroom, four and a half bathroom home on 0.1 acre lot

Redwood City is popular with Bay Area families who want to spend as little time battling the area's infamous traffic as possible: Equidistant between San Francisco and San Jose, it's 10 miles from Facebook and Google headquarters as well as the main campus of Stanford University.

Built in 2020, this home is located in the Edgewood Park neighborhood, about 1 mile from downtown Redwood City. Several city parks and a senior public high school are less than a mile away.

Inside: A concrete path flanked by gravel and succulents leads from the sidewalk to the main entrance. The front door opens to a high-ceilinged foyer; On the left there is a living room with paneling and a large picture window facing the street.

Behind the foyer is the main living room in an open style with stone floors that are reminiscent of light wood and run throughout the house. The dining area is accentuated by a black paneled wall. A few steps further is a comfortable family room set around a fireplace with black marble surround. Floor-to-ceiling glass doors open onto the terrace.

The family room is open to the kitchen with Viking appliances and a center island with space for storage and food. The countertops are made of porcelain and the lights are made of brass.

On this floor, next to a short hallway connected to the foyer, there is a guest suite with a full bathroom.

Upstairs are four bedrooms including the master suite with a bathroom with dark blue cabinets, glossy gray tiled walls and a walk-in shower next to an elegant porcelain bathtub. The guest bedroom, which is closest to the master bedroom, has a sliding door that leads to a full bathroom. The other two bedrooms are roughly the same size and share a bathroom with a walk-in shower and tile with green accents.

Outside space: The rear terrace next to the family room is shaded by an extension of the roof line and has a built-in ceiling fan and space for several chaise longues. Behind the terrace is a flat lawn that is large enough to accommodate exercise or play equipment. The attached garage has space for two cars.

COVID-19 Modifications Assumptions in Calculating Worth