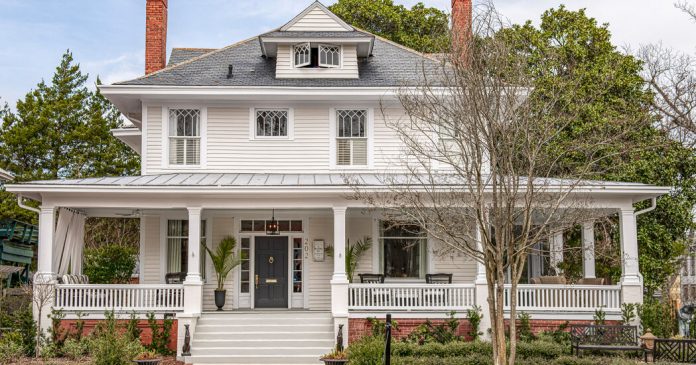 A colonial house circa 1912 with four bedrooms and four bathrooms on a 0.24 acre corner lot

This home, with its expansive porch and waterfront views, was designed by Herbert Woodley Simpson, who built many of the most elegant homes in New Bern. It's in a historic neighborhood, a few minutes' walk from downtown and one block from the Neuse, which flows into the Atlantic. Raleigh is about two hours northwest.

Inside: The front door opens to a remarkably large foyer with a gas fireplace (you could stow a grand piano in there). On the right is a front salon, also with a fireplace. The salon flows into a dining room, which includes a built-in sideboard and cabinets, and a crystal chandelier. All three rooms have wooden floors and high windows with original glass and can be closed with pocket doors.

A second living room (originally the dining room) is behind the front stairs in the foyer. It also has a fireplace. This room is connected to an eat-in kitchen with herringbone brick flooring, white cabinets with quartz countertops, subway tile backsplashes, a farm kitchen sink, and Thermador appliances. Also behind the stairs is a bathroom with linen wall cladding and a shower.

There is a second-floor landing on the curved front staircase that is large enough to hold exercise equipment and not obstruct the path to the bedrooms. There are three on this level. The primary suite features a gas fireplace, a carefully organized trio of cabinets, and a marble-tiled bathroom with intricately patterned wallpaper, a freestanding tub, and a walk-in shower. A second suite is almost as grand, though the fireplace is decorative and the bathroom can be entered from the bedroom or the hallway. The third bedroom was recently used as an office. A former sewing room at the top of the stairs is now a laundry room.

The third floor has been renovated as a large room with beadboard walls and ceilings and queen-size beds in dormer windows overlooking the water. The bathroom has a glass enclosed shower. There is also a partial cellar with storage.

Outside space: The property has recently been professionally landscaped and has an irrigation system on a separate water meter. A white picket gate between brick posts with pineapples leads into a side courtyard with brick paving stones, lush garden beds and a fountain. Parking is in the oyster shell-covered driveway.

A modern, mid-century home built in 1954 with two bedrooms, two bathrooms on a 0.13 acre hillside lot

This home is in the leafy Mount Washington neighborhood, about six miles northeast of downtown and less than a mile southwest of Occidental College. (The listing agent described it as the “Laurel Canyon of the East Side” because of its “hippy-creative vibe.”) Shops, cafes, and restaurants are located near Eagle Rock Boulevard and York Boulevard, and are also on East Figueroa Street .

Inside: This one-story house is typically Californian modern and focuses on a combined living and dining room with a white-painted wooden ceiling with exposed beams and a glass wall overlooking a large front deck. The flooring has been replaced by the owner and is a hard surface laminate that resembles wood. To the right of the front door is an open pantry with white cupboards and stainless steel appliances. A gray-painted brick fireplace climbs the wall opposite the entrance; next to it is a dining area with a sunken window that forms a corner for the green inside.

The two bedrooms are at the back of the house; Each has parquet floors and direct access to a terrace. In one bedroom, pocket doors open to the private bathroom, which contains a vanity with double sinks, a cabinet with sliding mirror doors, and a stone-tiled bathtub with a shower head. The second bedroom has a bathroom in the hallway with a combined bath and shower made of light green glass tiles.

Outside space: The landscape features palm trees and crepe myrtle. Terraced gravel and garden beds rise from the rear terrace up the slope. Off-street parking is in a driveway.

A 1935 Dutch colonial home with three bedrooms and one and a half bathrooms on a 0.55 acre lot

Two years ago a local developer bought and renovated this property to use it as his own residence. He reconfigured rooms, added storage, updated mechanical systems, rebuilt the chimney and chimney, and painted fresh paint inside and out. Built for the owner of the local soda bottling plant (which is now an incubator for small, creative businesses), it is one of the stately homes of the Hill Section, about a mile southeast of downtown. Champlain College is one mile north and the University of Vermont campus is half a mile to the northeast. It takes about three and a half hours to drive southeast to Boston and about two hours north to Montreal. You could fly too; The airport is about four miles away. And Amtrak is adding a high-speed service from downtown Burlington to Penn Station in 2022.

Inside: The house has three entrances: a formal one in front of you that leads you into a foyer with an original staircase; a rear one that leads from the back yard to the basement and kitchen; and one on the side that leads into an elegant mud room (this is not an oxymoron) with built-in storage shelves. French doors lead from there into the dining room.

All of these rooms (including the mud flap) have original oak floors that have been stained with ebony. You continue into a living room separated by a three-sided fireplace that stands on a concrete stove that protrudes into the center of the room. To one side of the fireplace is a room with built-in shelves (including a cabinet with a sliding door that disguises a television), a textured blue accent wall, and a modern mid-century pendant light. The other side is lined in windows overlooking Lake Champlain and has a built-in upholstered bench that wraps around three walls.

The dining room is connected to a kitchen that has been slightly but noticeably modified with royal blue, turquoise and coral paint. A niche with windows on the side is painted blue-green from floor to ceiling and is shown as the breakfast room. Behind the kitchen is half a bathroom and a back door.

The largest of the three bedrooms on the upper floor has a padded accent wall, built-in storage space and a window niche with a lake view. A second bedroom that belonged to a child has a reading nook behind a boldly patterned wall. The bedrooms share a hallway bathroom with mint vintage wall tiles, pink floor tiles, glossy black cabinets, and a cast iron tub.

Outdoor space: The home has wide lawns front and back, a two-car garage, and covered parking that leads into the dirt room.