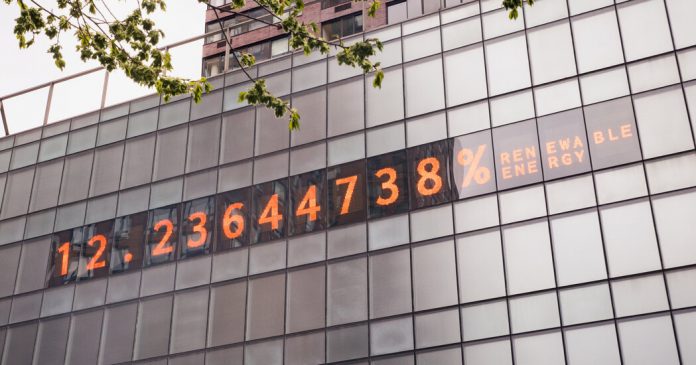 A touch of optimism has been added to the Climate Clock, the series of decreasing numbers on the facade of a building in New York's Union Square, designed by two artists and activists to communicate the urgency to curb carbon emissions.

Seven months ago, with the help of others, artists Andrew Boyd and Gan Golan redesigned “Metronome,” a public art project commissioned by the developers of One Union Square South and unveiled in 1999: His clock instead of the time of day measure would measure the remaining time on some points to reduce emissions and prevent some global warming effects from becoming irreversible. (About seven years, said the clock's creators.)

Now a group of people working on the Climate Clock project have decided to give a hint of hope by adding a second set of numbers to the display that represents the increasing percentage of the world's energy coming from sources like the sun and wind comes from.

On Sunday afternoon, a project participant, Greg Schwedock, entered One Union Square South, climbed several flights, entered a small closet-like room, and then pushed through a low two-by-four-foot opening in a wall that led into a dusty cinder block chamber just beyond the Digital display of "Metronome" ends.

Schwedock communicated with the technical director of the Climate Clock, Adrian Carpenter, via zoom and made some adjustments to an electronic panel.

Then at 4:26 am he hit a switch and a new message appeared on the display outside: “Earth has a deadline. Let's make it a lifeline. "This was followed by a 10-digit display that shows the amount of global energy from renewable sources. It goes up, but slowly. As of Sunday afternoon, the clock reported a little more than 12 percent.

Laura Berry, lead researcher for the Climate Clock, said the renewable energy count on the “metronome” display is based on information from the Our World in Data project, led by Max Roser of Oxford University.

The numbers used to measure the critical window to reduce emissions stay current, but alternate with the numbers for renewables.

The time adjustment was scheduled ahead of Earth Day Thursday and coincides with several environmental rallies and events planned for New York, Washington and Glasgow, where the United States' climate change conference will be held in November.

The Climate Clock was inspired in part by the Doomsday Clock maintained online by the Bulletin of the Atomic Scientists and the National Debt Clock near Bryant Park in Manhattan.

Boyd and Golan believed that "Metronome," with its existing electronic display and a busy public area, seemed the perfect place for an environmental message. Andrew Ginzel and Kristin Jones, the makers of "Metronome", agreed, as did the management of One Union Square South.

Schwedock said that while he still views the climate as a state of emergency, he is happy to help make the public aware of the renewable energy numbers.

"It's nice to have positive climate news," he said. "The environmental community can be proud of that."

Why Would a Broadway Actor Select to Stay in Philadelphia?

Greenport, N.Y.: A Informal Village on the Waterfront