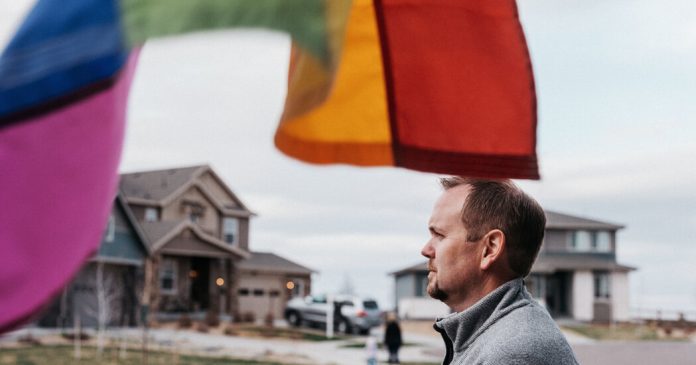 The first amendment prohibits the government from violating a citizen's right to freedom of expression, but homeowners associations are not government agencies. Your ability to censor the phrase is much broader. "You need a state actor to violate the Constitution," said Rovinsky. "Yes, you have freedom of speech, but while the government cannot violate this, your HOA can say you cannot post a Black Lives Matter mark."

Residents who challenged HOAs have had more success arguing violations of the Fair Housing Act or the Civil Rights Act, both of which prevent discrimination based on race, religion, or gender. "A court would want to look for discriminatory intent," said Rovinsky.

Mr Pendery was told he had to apply for a permit to fly his flag, but he refused to do so. Instead, he filed an open-ended query to see if there were any irregularities in how and when his district had enforced its flag policies. He read 500 pages of emails from district committee members and then contacted the American Civil Liberties Union of Colorado, which sued the district on his behalf.

"I think it was selective enforcement," said Mr Pendery. “My flag was clearly so monstrous that I had a letter about it within 48 hours of setting it up. I have not seen such quick action taken against their other policies. "

The A.C.L.U. of Colorado received a restraining order on March 4, and the district is currently working on a new language that will remove the requirement that residents submit flags for approval before they fly. "I raised my flag again the same day," said Mr. Pendery. The incident was a lesson for his children aged 2 and 8.

NAR’s Advocacy Work In the direction of COVID-19 Aid