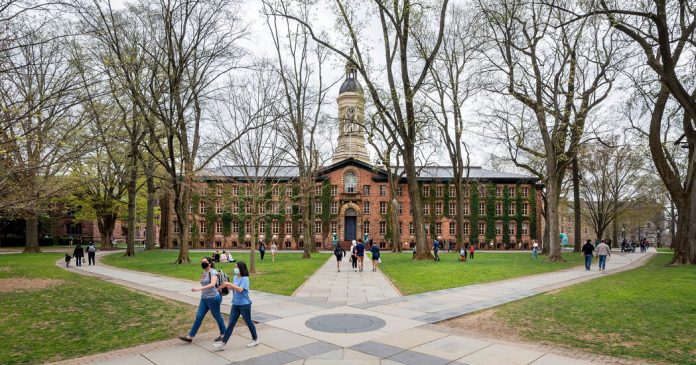 After living in Manhattan for 25 years, Donna Fay decided to create a new kind of life in 2019, in Princeton, N.J.

Ms. Fay, a licensed aesthetician who advises people on how to look their best “from the clavicle up,” moved with her baby son from the Upper East Side into a house with parts dating from the early 1700s. The property, which sits on the edge of Mercer County, 10 minutes from the center of town, included a carriage house, a cottage, a tennis court, a pool and a paved courtyard. And while some might have been daunted by the upkeep of its almost eight acres, Ms. Fay, 49, said she was born on a farm and had “no problems getting on a lawn tractor and cutting grass.”

She went so far as to credit others’ maintenance phobias for the bargain she got. (Public records indicate that the sale price was $2.1 million and that, at one point, the property was listed for $4.5 million.) “People nowadays don’t want so much acreage,” she said.

Well, that was then. After a year of lockdown, one imagines many would be happy to follow her on the back of a lawn tractor. But the number of available properties of any size in Princeton has plummeted. As of April 19, only 73 homes were on the market, of which 17 were listed for less than $1 million, said Martha Stockton, a second-generation real estate agent who descends from one of the town’s founding families. “There are usually an average of 125 listings this time of year,” Ms. Stockton said.

Princeton packs many charms into its 18.4 square miles. Halfway between New York and Philadelphia, it has long attracted affluent professionals, many enduring commutes of more than an hour in return for roomy, historic houses, old-growth trees that burst into flower in spring and the cultural riches of Princeton University.

Jeffra Nandan, an educator, and her husband, Yash Nandan, a sociologist, moved to Princeton in 1971 because Mr. Nandan insisted on access to a decent research library, and the university has several, which it makes available to the public. (Frank Gehry designed the latest, the Lewis Science Library, which opened in 2008.) The couple raised two children in the community, and still live in the same house.

“It’s a highly educated town, with people who value education,” Ms. Nandan, 73, said. “The school system is wonderful. That’s one of the reasons we never moved.”

John James Jenkin, 54, an executive of the furniture company Kartell, arrived in 2008 because he was relocating his family to the United States from northern Italy and couldn’t imagine his provincial children surviving the New York City subways.

“I came here on a Sunday and looked around,” he said. “I liked the place. It was small, quiet and very New England” — an Italian’s way of describing quaint old buildings and manicured greenery.

The children have since grown up and returned to Europe, but Mr. Jenkin and his wife became attached to a knot of international academics and corporate professionals. “Ninety-nine percent of our friends are from Europe,” Mr. Jenkin said. He’s staying, too.

Princeton’s population of about 31,200 is 67.2 percent white, non-Hispanic; 16.9 percent Asian; 7.5 percent Hispanic or Latino; and 5.7 percent Black. “We have one of the oldest African-American communities in America; there were free Africans living here in the 17th century,” said Sheldon Sturges, a founder of the nonprofit Princeton Future, a community planning organization.

Much of the Black community has been displaced over the past century, and Princeton, with its deep historical roots, is coming to terms with its racially troubled past. Having formerly rejected student activists’ demands to remove Woodrow Wilson’s name from its school of public and international affairs, the university reversed course last June and expunged it.

This June, a new name for the John Witherspoon Middle School will be selected from a list of alternatives offered by a committee and voted on by the public. Witherspoon, a signer of the Declaration of Independence, was among several slaveholders who led Princeton University in the 18th century. (Proposed substitutes include John Lewis, Ruth Bader Ginsburg and Michelle Obama.) Witherspoon is also the name of one of the most prominent village streets. Paul Robeson, the singer, actor and activist, whose father was born in slavery, grew up there, in a historically Black neighborhood that has been gentrified. In April, Robeson’s legacy was observed in a weeklong program of events that will be repeated in coming years, and his family house is being restored. He is also in the running for the new eponym for the middle school.

Until recently, Princeton was two nested entities — a village-like borough and a surrounding township — that shared a name and a school system, but had different governing structures. They were combined in 2013.

Stretched over 600 largely neo-Gothic acres, Princeton University is the municipality’s primary employer and a bounteous provider of free lectures, walking paths and sports events. (The football stadium remained open during the pandemic so the public could climb the stairs for exercise.)

On the campus, you will find such treasures as Nassau Hall (1756), which served as the nation’s capitol in 1783; the Princeton University Art Museum, for which a new building has been designed by the Ghanaian-British architect David Adjaye; the McCarter Theatre Center, which since 1930 has brought groundbreaking actors, dancers and musicians to its stages; and even a New Jersey Transit train depot.

In April, the university announced plans to add three million square feet of construction over the next 10 years, including student housing, parking facilities and a 2,100-seat soccer stadium and racket center. It also vowed to reach net-zero emissions by its 300th anniversary, in 2046.

What Princeton University doesn’t offer to the community in which it is a major landholder is much tax revenue. This is one reason residents have exorbitant property taxes, paying an average $20,352 on homes with an average value of $841,064.

Also contributing to the town’s high tone are the Institute for Advanced Study, a research center whose past and current faculty include 35 Nobel laureates (not least Albert Einstein), and the Princeton Theological Seminary, a Presbyterian training ground founded in 1812.

History is embedded in almost every rock and brick — clothed grandly in the Morven Museum & Garden, an 18th-century former New Jersey governor’s mansion; unrolling in Princeton Battlefield State Park, where George Washington triumphed over British Regulars; popping up like crocuses at the Princeton Cemetery, where Aaron Burr, Grover Cleveland and Sylvia Beach (founder of the Paris bookshop Shakespeare & Company and James Joyce’s publisher) are buried.

Princeton’s most coveted houses, many dating from the 19th and early 20th centuries, tend to be in the old borough, within walking distance of the business district centered at the intersection of Nassau and Witherspoon Streets, across from the Princeton campus.

The least expensive property currently for sale is in Palmer Square, in the heart of the little downtown. This section was revitalized beginning in the 1930s (at the expense of a Black neighborhood there) and developed with apartments over shops. A furnished 272-square-foot condo in a 1932 shingled building is listed for $299,900, with a monthly homeowner fee of $258 and annual taxes of $5,372. The Residences at Palmer Square is a complex dating from 2012, with luxury condo units or townhouses that can be bought or rented.

An example of a loftier property somewhat removed from the center is a converted 121-year-old dairy barn with six bedrooms and a half-timbered tower that was originally an outbuilding on the Drumthwacket Estate, the official home of the governors of New Jersey. The price of that property, on two acres, recently dropped to $3.75 million, with annual taxes of $43,151.

A springtime Sunday shows Princeton at its best, with blossoms dripping from trees and street-side cafes humming. “People go in on the weekend just to walk around,” said Stephen Rounds, a local dentist, noting that shoppable village centers are especially attractive in car-centric New Jersey. Traffic snarls are one consequence; scarce and expensive street parking is another. (The local government has been working on solutions to both problems.)

As almost everywhere else, businesses have suffered during the pandemic. The empty shell of Brooks Brothers on Palmer Square reflects the store’s national failure; more personal was the announcement in October that Henry and Robert Landau, brothers who owned a woolens shop that had been operating in Princeton since 1955 (with a little Einstein museum tucked in the back), were bowing to economic pressures and retiring. But residents like Dr. Rounds, who look back to a time when the downtown was quieter and quirkier, see possibilities for the return of mom-and-pops.

During the 2019-20 school year, 74 percent of 11th and 12th grade students enrolled in at least one Advanced Placement or International Baccalaureate course, versus 35.7 percent statewide. The 32 subjects included microeconomics, music theory and Latin. Students may also arrange to take courses at Princeton University.

The New Jersey Transit shuttle known as the “Dinky” makes its five-minute trip from Princeton to the adjacent community of Princeton Junction every day. Travel from there to Pennsylvania Station in New York takes an hour to 90 minutes and costs $16; a monthly pass is $451. The trip to 30th Street Station in Philadelphia takes an hour or two, with a transfer in Trenton, and costs $5; a monthly pass is $145.

In 1683, a New Englander named Henry Greenland built a tavern, or “house of accommodation,” on the King’s Highway, which had evolved from one of the pathways of the region’s Lenni Lenape people. This was believed to be the first house in the municipality now known as Princeton, and parts of it remain in a building on the Princeton Kingston Road. In 1756 the College of New Jersey relocated to the area and constructed Nassau Hall as its quarters. The school changed its name to Princeton in 1896.

Pay It Ahead: “Push By way of Your Self-Doubts.” Profession Recommendation...