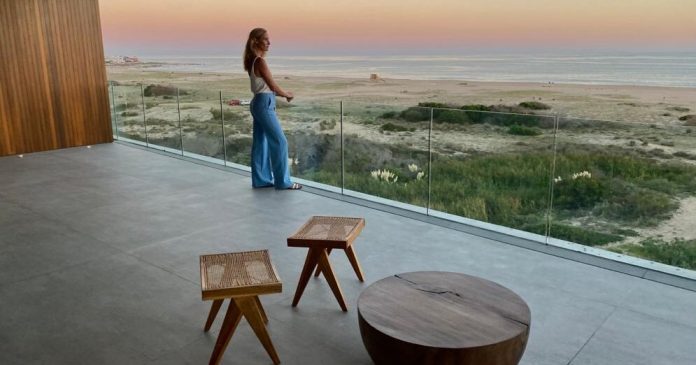 This article is part of our latest special report on Waterfront Homes, which focuses on life near and sometimes even on the water.

For Ingo Schirrmann, a television producer from Germany, a hastily planned New Year's vacation in Uruguay became a new lifestyle. In December 2012, almost on a whim, he canceled his tickets to Courchevel, France, and instead flew to Punta del Este on the Uruguayan coast. The beaches of South America sounded more exotic and warmer than the slopes of the French Alps, he recalled.

He drove straight to José Ignacio, a bohemian-chic peninsula about 20 miles east of downtown Punta, and had a great time – great enough to buy land near the ocean and eventually build a modernist house there Designed by acclaimed local architect Martin Gómez. Mr. Schirrmann, who lived in Hamburg, wanted to use the house during the summer in the southern hemisphere, but when he started spending time in José Ignacio, he was taken with the slow, friendly atmosphere. The pandemic cemented his decision to make it his primary residence.

"If you had told me five years ago that I lived in a small village, I would not have believed it," he said. “The special thing about José Ignacio are the people who come here. It's easy to get in touch with like-minded people from different parts of the world, and it's all super relaxed. "

José Ignacio is in fact a small village less than a square mile. It's also the most cosmopolitan corner of Uruguay. The once little-known fishermen's enclave has developed in recent years into an attraction for wealthy globetrotters with a penchant for rusticity. Like Mr. Schirrmann, Europeans and Americans who travel to the Uruguayan coast on vacation buy second homes there and join a growing group of residents from South America.

There's a famous beachfront restaurant, La Huella, which invariably delights guests with its fire-grilled seafood and weathered wood decor. There are gravel streets with Instagram-friendly boutiques. Most importantly, there are expansive beaches, open skies and no memories of the stresses of modern life. The proximity to Punta del Este, a larger, more urban resort, is both a convenience and an afterthought.

"The Uruguayan coast is an international meeting place," said Alejandro Perazzo, a real estate agent affiliated with Sotheby’s International Realty. “For buyers from abroad, this country has many advantages compared to the rest of the region. The rules of the game don't change here no matter who is in government, and that predictability is attractive. It's safe too. "

Mr Perazzo compared Uruguay to its neighbors Brazil and Argentina, two countries with a history of political and economic upheaval. Argentinians and Brazilians have been romping around in Punta del Este and José Ignacio for decades. But recently, given Uruguay's stability and the announcement of tax breaks for foreign investors, many of them have been staying longer. (For example, applications from Argentines for permanent residence in Uruguay tripled to nearly 10,000 applications in the past year, according to local news media.)

And so the real estate market was seething, especially when it comes to luxury residences with an inspiring view. A number of upscale (but reasonably low-key) waterfront developments are ongoing in and around José Ignacio.

Lvarez Castillo also set great store by high-quality materials such as Italian marble, German fittings and Brazilian lapacho wood, but was reluctant to plan the furnishings for the building. His idea was to keep spending under $ 2,000 a month per unit (there's an outdoor pool and small gym, but not much else).

“A lot of our buyers have other homes and want low maintenance fees,” he said. "What they love about this area is the spaciousness, the proximity to the sea and the neighborhood atmosphere."

In contrast to Punta del Este, where the skyline is getting higher and higher (the new Fendi Château Residences, a complex of four buildings with 27 floors), José Ignacio and its surroundings have strict building regulations that are also geared towards preserving the environment as rural ones Identity of the area (buildings cannot exceed 20 feet). At a time when people all over the world are rethinking city life, the promise of immortal rusticity paired with good taste is very appealing – and has its price.

Waterfront properties that are becoming scarce can cost $ 150 per square foot, much more than similar properties in less fashionable coastal areas of Uruguay. A home built by an established local architect starts at $ 200 per square foot. Mr. Gómez recently completed a 5,000 square meter residence right in the sand dunes of Playa Mansa, which are known for their spectacular sunsets. Including the land, it cost about $ 4 million.

There are still a few options to be found. In La Juanita, a rugged, slow-developing neighborhood just a mile west of the village, lots about 300 yards from the beach cost between $ 30 and $ 40 per square foot.

But many buyers, especially foreigners, may not be interested in overlooking a foundation structure or worrying about house maintenance logistics. The upcoming Costa Garzón has both bespoke homes and condominium style services like housekeeping, landscaping, and more. Conceived by Alejandro Bulgheroni, an Argentine energy tycoon who owns a nearby championship golf course and award-winning winery, Costa Garzón is poised to be the most exclusive development in the region, if not the country.

Right on José Ignacios Playa Brava and just a five-minute drive from the center of the village, this collection of oceanfront properties – from 12,000 to 16,000 square feet and starting at $ 1.7 million – has a number of extras, including a membership to the Garzón Tajamares Golf Club and Bodega Garzón Wine Club (where members can create their own wines using grape varieties from one of Mr Bulgheroni's vineyards in Uruguay, California, Italy, France and Australia). There will be a beach house with a restaurant with seating, as well as a restaurant called El Chiringuito de Mallmann (named after its famous Argentinian chef, Francis Mallmann), which opened in 2020. Buyers can hire the Costa Garzón team to build their homes or bring their own architect, as long as the design meets certain aesthetic guidelines.

While Mr. Bulgheroni is unmistakably responsive to the jet set, he is well aware of the importance of respecting the pastoral style of the area. “I think this place will continue to attract more people, but it was never intended for formal people; it's relaxed and it's idyllic. "

Adorning for the Holidays in a Gloomy 12 months