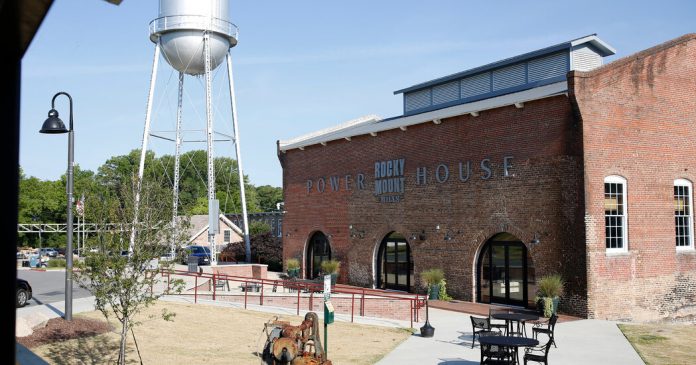 The High Point project called Congdon Yards is an attempt to create a year-round meeting place that also attracts young talent. In addition to offices, the space includes a co-working area and a 6,000 square meter workshop with commercial woodworking equipment available to local designers and craftsmen.

For these remediation projects, a project in Winston-Salem serves as a shining example of what an intelligent adaptive reuse project could achieve.

The city has long been the seat of the tobacco company R.J. Reynolds, now part of Reynolds American. When Reynolds moved its manufacturing operations out of town in 1986, city officials, Wake Forest University and Wake Forest Baptist Medical Center began making long-term plans and investments in the site. The first building was renovated in 2012.

Today, almost all of the warehouses, factories, and other industrial facilities in a 2.1 million square foot complex called the Innovation Quarter have been renovated. The buildings house the laboratories of the health system and the university's medical and technical faculties, as well as companies such as I.T. Inmar company and dozens of start-ups – all crowded around a small green space.

Innovation Quarter is not a dying research park. Thousands of workers and students roam its 330 acres daily, and the caretakers have a busy schedule of yoga classes, food trucks, and lunchtime concerts in the park. That dynamic has changed the rest of Winston-Salem, which is now a busy downtown area with significant residential growth. The city gained workers during the pandemic, according to a McKinsey report.

"This area lost jobs in the 1980s and 1990s," said Graydon Pleasants, director of real estate development for Innovation Quarter. “Now people are leaving California and leaving the big cities. The spillover is finally here. "

The last unfinished site adjoining the park is a former power station being converted into an office building by the local company Front Street Capital. As a hat to the building's past, the company transformed an adjacent elevated railway line on concrete trestles into a sidewalk; Downstairs, in the former coal mine, the locals sit at the long tables of a brewery while their children play nearby.