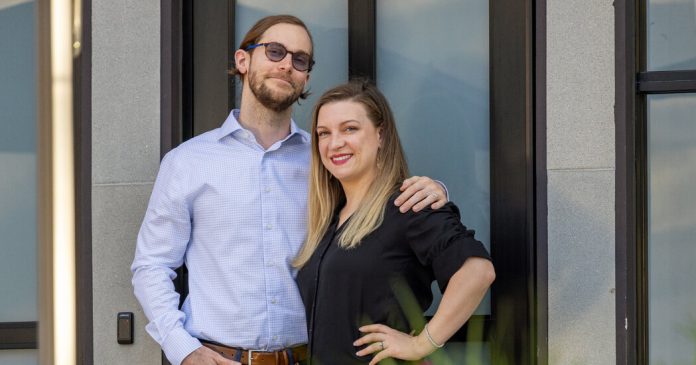 Before the pandemic caused claustrophobia to rise in every New York apartment, Matt Foerster, 33, and Tanya Edmunds, 34, had outgrown it.

For three years they had shared a two-room apartment with a colleague in Crown Heights, Brooklyn, and quickly tested the limits of the available space: first, a Peloton exercise bike; then two dogs, Tova and Eloise.

But they loved the place, and their roommate, Joanna Siegel, was "probably one of the few people who would endure living with us," said Mr. Foerster, general manager of a Shake Shack in Brooklyn.

Previously, he and Ms. Siegel had lived together in a dorm-like loft in Bushwick, Brooklyn, with five bedrooms and a single bathroom, a housing situation Ms. Edmunds laughingly describes as "terrible."

So the Crown Heights apartment was kind of an upgrade: it had central air conditioning, a washer and dryer, a skylight, and was in a modern, recently renovated building. Mr. Foerster and Ms. Edmunds, who had met while working in the Shake Shack offices, loved being within walking distance of Prospect Park which was a win for them and the dogs. They lived near friends and some of their favorite restaurants. Their joint rent started at $ 3,000 in 2016 and had only grown to $ 3,100.

The trio spent a lot of time together and during the pandemic, Mr. Foerster and Ms. Siegel held a weekly happy hour with beer and "Last Week Tonight With John Oliver" on Thursdays. But after Mr. Foerster and Mrs. Edmunds got married early last year – just weeks before the lockdown reached town – they decided it was time to move on and find their own place.

The lease expired in July, but until then "we were still trying to understand how long things would be different in town," said Ms. Edmunds, who was fired from Shake Shack's offices last spring. "It was really hard to come up with a plan and I was unemployed at the time so we definitely thought twice about moving at the end of the lease."

Your landlord hadn't wanted to offer an extension, but Mr Foerster was able to negotiate eight additional months by pointing out that there were already eight unoccupied units in his building – did the landlord really want to make nine? Ms. Siegel planned to find a new apartment with her boyfriend as soon as the expansion was finished.

Jobs: He is general manager at Shake Shack; She is the event production manager.
In the queens bar scene: Mr. Foerster loves stopping by Astoria for beer and cheese during the week, and the couple take a bus to Long Island City to visit breweries like Big aLIce Brewing, Fifth Hammer Brewing Company, and LIC Beer Project.
Running routes: Ms. Edmunds often meets up with friends for a run at Astoria Park, and runs a friend to Roosevelt Island once a week.

With an extension until mid-March, Mr. Foerster and Ms. Edmunds began their search in January of this year. Ms. Edmunds, who grew up in New Jersey and had lived in the city for 17 years, knew she wanted to live in Astoria, her favorite neighborhood of all the neighborhoods she'd lived in.

But when she dictated where they were going, she said, "Matt's priorities were high on the list." This included amenities the Brooklyn couple had become used to: central air conditioning (or at least something better than a window unit) and a dishwasher.

They also hoped to find a one or more bedroom apartment to house their belongings and the two dogs.

They took the marathon approach of seeing 15 homes in a single day with the help of a friend who works for a property listings website. “When we got into these rooms, it became easier for us to really talk about what we wanted,” recalls Ms. Edmunds.

You lost your first choice – a 2-level condominium with a balcony and walk-in closets – but your second, a one-bedroom, one-bathroom apartment in a new building. The device has a small niche in which you can store your exercise bike and other equipment. Mr. Foerster and Ms. Edmunds appreciate that they can close the door when people come by so that things look tidy.

The rent was higher than they hoped and higher than they saw on the listing, which was almost a deal breaker. But they were negotiating two free months on a two-year lease with a rent of $ 2,700 a month.

The apartment came with a few bonuses, including laundry and a garbage chute on the floor, an elevator, and unexpected neighbors. When they moved in, they saw the names of two former Shake Shack colleagues on packages in the building and learned that their friends lived two floors below them.

Saying goodbye to Ms. Siegel was “the definition of bittersweet” in the words of Mr. Foerster. But she and her boyfriend moved to Greenpoint, Brooklyn, close enough that the two couples can meet for a beer over the weekend in Long Island City. Mr. Foerster and Mrs. Edmunds had invited the couple out for dinner the night they moved in, and they were all sitting in camping chairs and partying with takeaway and beer.

For her first apartment as a married couple, Ms. Edmunds knew she wanted to invest in some good furniture. In Crown Heights, they hadn't owned a dining table and often ate on the sofa; the only other seating was a couple of stools on the kitchen island, which was often cluttered with things that you have to drop when entering the door.

So they ordered a new dining table along with a pull-out sofa that would allow them to have overnight guests. "The couch helps create a comfortable, comfortable environment for people," said Ms. Edmunds.

When the new furniture arrived, the couple invited their former roommate and boyfriend to their first official dinner at the new location – at a table with non-folding chairs.

"I cooked because I thought, 'It's the first meal at the table, we can't order take-away!", Said Mr Foerster. As an added luxury, the exercise bike has been made invisible.