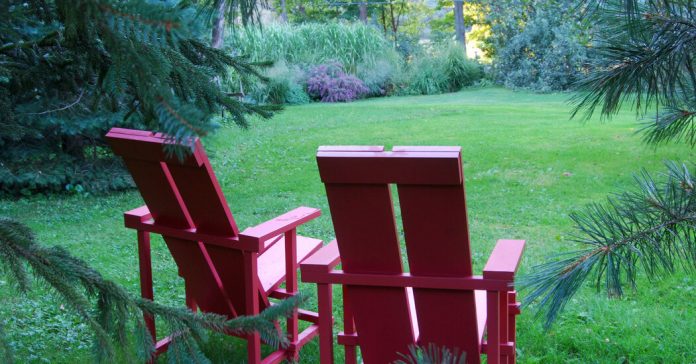 Every year, right now, I want to declare it Throw-in-the-Trowel Week as the aftermath of the delicate, joyous effusion of spring turns from charmingly blurry to just fluffy and tattered.

The garden has a bad case of what a friend calls "the Shaggies", not to be confused with similar terms for a hairstyle or a dance or even a variant of the charming British slang for sex. It looks messy out there.

In the second half of June, I feel the urge to close my eyes – to make everything disappear in the “see no evil” manner. Go back inside and re-watch episodes of "Six Feet Under" while fantasizing about plowing under the worst of garden areas and erasing them.

I wander around carrying the remains of an apartment full of potted plants that have still found their home forever. It's a not entirely unconscious longing: If only these creatures that were ordered months ago, who knows what in the back of my mind, could prove the missing pieces of the puzzle in front of me and complete the picture. If only they could fix it all.

But those few unplaced plants won't; the scene has become too blurred. This is no time to look the other way, however strong the urge may be.

Measures that are being carried out now – in vegetable patches, on certain perennials and shrubs, against weeds – will revitalize the garden so that it looks good and remains productive even in frosty conditions.

This isn't the big spring cleaning or fall. It is much more about the targeted care and the commitment to give the neediest places regular, deep drinks in the coming hot weeks.

Water early in the morning and especially focus on container plants and anything that is being replanted, including the entire vegetable garden. If you're struggling to keep up with irrigation, it may be time to install a simple drip irrigation system.

The same friend who invented "the shaggy" offers this maxim when I express my feeling of being overwhelmed every year: "Clean edges and fresh mulch can hide a multitude of sins."

A thin top dressing is all you need, assuming you've mulched this spring. If the lines between the lawn and the bed are fuzzy or wobbly, use the step-on crescent trimmer in the worst places to trim them cleanly. Yes, I know: there is the weed killer. But its raw strength can be a bit much when the plants you want are close to the borderline.

The quieter solution is my 10-inch stainless steel shop scissors from Wiss, which resemble sturdy, oversized scissors. They do the job well – as does manually pulling up ivy (Glechoma hederacea) and prunella that want to overtake and spoil things. The scissors are also good for cutting around stepping stones and other paving stones; Viewing paths without interference from enthusiastic lawns provides another welcome visual relief.

But worst of all can be those who sow in the gravel of paths or the driveway. A dutch hoe or dutch hoe (like the one from Clarington Forge or Sneeboer) or even a stirrup hoe – tools that cut just below the surface when both pushing and pulling – make this job quicker and easier on the knees. Follow by chopping off the removed weeds.

This weed-killing policy has exceptions: two natives each have a modest territory. Clearweed (Pilea pumila) is a host plant for various butterfly caterpillars, and fans of jewelweed (Impatiens capensis) include hummingbirds, some moths, bumblebees, and honeybees. Know your weeds.

A destination for July fourth: those messy lilacs

If one looks at wilted lilac blossoms, one appreciates trees and bushes that simply drop their faded spring blossoms and just use a rake to clean them up – or those like crab apples whose blossoms seem to evaporate.

The lilac (Syringa vulgaris) and the Hyacinthiflora species also leave their large, dried-out inflorescences. Time is running out to disappoint them without affecting the start of the bud set next year. In my northern garden, I want to finish this task by July 4th.

Cut off each faded flower cluster at its base, just above the two new angled stems that hold next year's buds and flowers. With large bushes this is ladder work. It would be better, and far safer, to invest in a lightweight, tubular aluminum garden or telescopic secateurs, such as those manufactured by ARS Corporation. Then tackle this and other light prunings of solid ground.

Sometimes the first step in making things better is making them look worse. This is especially true for perennials that require strict haircuts.

Common early bloomers like Euphorbia polychroma and some perennial geraniums have just got theirs in my garden. The catnip (Nepeta) and lady's mantle (Alchemilla mollis) will soon be added to the list. If pruned hard, gaps will remain in the beds as they will be reduced to stubble, but in a few weeks there will be a flood of new growth.

Meanwhile, the spring onion foliage has done its job of nourishing the onions below; it can also work. Daffodil drifts in the lawn can be mowed and the dirt raked off; Simply remove the withered leaves of smaller clumps in beds.

Some deadheading is not aesthetically motivated, but a different form of self-defense: to prevent the garden from being overrun by self-seeding. Even something as charming as columbine can overdo itself, so I'll remove part of the seed heads. The celandine poppy (Stylophorum diphyllum) is too productive. I cut it off and then pinch off seed heads to share with friends or toss in the trash instead of ending up with garden beds (or a compost heap) covered with too much of a good thing.

There is another strategic form of pruning that does not allow finished flowers to die. Some perennials such as large phlox (Phlox paniculata), sunflower (Helenium), various asters, and joe pye weed (Eutrochium) can be pinched in about halfway to bloom a little later, perhaps two-thirds of their normal height and bushier. But hurry up – this is one more task to complete soon or to skip entirely.

Aside from one-off crops like tomatoes, eggplants, and peppers, many edibles are best sown more than once to ensure continued supply well into fall (and even later with the smart use of garden coverings).

Subsequent sowing to save: basil sown now will be in the best condition for the tomato harvest and for freezing pesto for the winter. Another round of dill should also go in for the pickling season. Coriander needs to be re-sown every few weeks, and what about a short row of spring onions?

Where edible split or split peas will soon dry up and be cut down, the space for sowing autumn peas in July could be left open. Or it could be used for something else – greens galore, repeated: lettuce, arugula, mustard, chard, spinach, leaf broccoli (called spigariello), plus more kale and cabbage. And now is the time for radicchio.

Go in more beets and turnips (for greens or roots or both), carrots and radishes. Bush beans are also on the list, and maybe even a bush zucchini or cucumber (a variety that describes how long it takes to grow to be around 50 days to ripen).

Hot, dry soil and weed pressure can be difficult for direct sown seeds. Apartment sowing and transplanting later can be easier for almost anything, except for root crops, which are generally reluctant to transplant.

When and what time can you sow? Count back from your first fall frost date and adjust a little for the slower growth that comes with days getting shorter and generally cooler days as these late crops near maturity. Add about two weeks to the estimated harvest days listed on the package. (You may want to consult the Fall Vegetable Planting Calendars for advice from around the country.)

Important: Leave space for the garlic that will be planted around October – maybe where the tomatoes are now.

And then there's the tactic of putting in a little drama – adding the drama to get the attention. A couple of brightly colored chairs can do this, or a grouping of well-placed containers, especially large ones filled with a shrub from the garden center's late spring sale, or perhaps a Japanese maple.

Bold tropics from the houseplants department can also be used and ensure enjoyment all year round.

Do you want more drama? Try adding clematis vines where they can climb over shrubs that have already done their thing – sort of a second appearance in the shaggy season of years to come, courtesy of the flowering creeper.

One year, in mid-June, I had a large void where a shrub in a prominent flower bed had died and nothing to fill as spring passed. A packet of leftover winter pumpkin seeds provided the answer. Within a few weeks, the hole was obliterated by strong leaves on fast-growing tendrils.

That would have been enough to satisfy me. But the frost came late that year, and there were even a few butternut squashes for the stockpot.

Margaret Roach is the creator of the website and podcast A Way to Garden and the book of the same name.