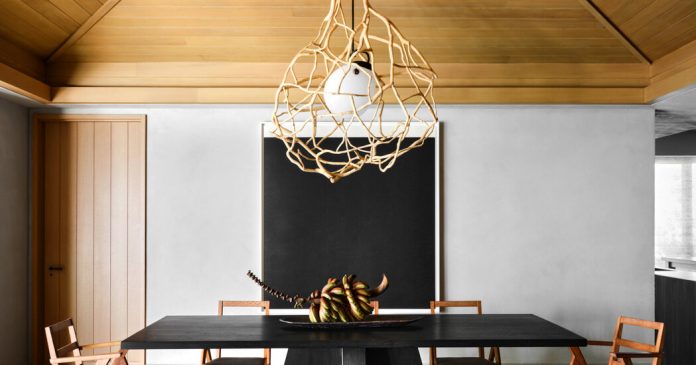 When Nicole Hollis and Lewis Heathcote began traveling to Hawaii regularly a decade ago, their visits invariably mixed business and pleasure. The couple who run NicoleHollis, a San Francisco-based interior design firm of which Ms. Hollis is the creative director and Mr. Heathcote is the executive director, wanted to break out of the Bay Area.

“We heard more and more of our customers say, 'Yes, we are building or buying or spending time in Hawaii,'” said Mr. Heathcote, 46. “So about 10 years ago we had a real intention to spend time here . "

Their many visits over the years have helped them build a network of professional contacts and show that they are serious about working in the region. The couple's company has since designed numerous private homes in Hawaii and is currently working on 1 Hotel Hanalei Bay and Kona Village, a Rosewood resort.

On the way they fell in love with the islands for personal reasons. "When you're from the east coast, like Nicole, or from Europe, it's just so unearthly," said Mr. Heathcote, who was born and raised in England.

As business travel turned into extended family trips with their kids – Poppy, now 10, and Beckett, 7 – the couple decided it was time to buy a vacation home in Hawaii.

When they started hunting around Kailua-Kona on the Big Island in 2019, they knew exactly what they wanted. "We just started looking for the ugliest rundown apartment we could find because we knew we wanted to remodel it," said Ms. Hollis.

They found it at the Four Seasons Resort Hualalai: a 2,800-square-foot, three-bedroom apartment with a series of verandas that hadn't changed since it was built about 20 years ago.

"It was super dated," Ms. Hollis said, with creamy carpeting, gold-colored slate and orange-colored woodwork, and cupboards and fixtures installed on diagonals that made awkward corners. "It was all 90s."

After buying the house in April for $ 1.9 million, they gutted it because they saw little that they wanted to keep other than the cedar-paneled vaulted ceilings they were renovating and the in-outside river. "We were the first people here, in one of those condos that really got studded," said Mr. Heathcote.

Instead of the cream-orange color scheme, Ms. Hollis developed a high-contrast palette of light and dark gray tones as well as bleached and blackened woods. “I wanted something calming and relaxing, not a lot of decoration,” she said. “A lot of these places have tons of tiles and lots of accents, decorations, and sconces. We just took it all away. "

With the aim of highlighting the textures of various materials, she added bleached, recycled teak flooring, bright white oak doors, and warm gray lime plaster on the walls. Then she brought furniture with a natural, no-frills look. The great room is furnished with a low sectional sofa with Belgian linen upholstery from Restoration Hardware, a Beam coffee table in blackened oak from Marlieke Van Rossum, vintage French rattan armchairs and a hand-woven jute rug from Mark Nelson Designs.

Artful lights – including a Planck pendant light by Jérôme Pereira with a molded oak frame that hangs above the dining table, and free-form pendant lights by Rogan Gregory above the bedside tables in the master bedroom – create a visual flair.

The couple's contractor, Dowbuilt, began construction shortly after Ms. Hollis and Mr. Heathcote closed the property and made rapid strides to help Ms. Hollis & # 39; Bringing vision to life – until the pandemic broke out, at which the project stalled.

To get the renovation across the finish line, the couple flew to the island with their children last July, placed themselves under quarantine, and then personally monitored the final stages of the work, which totaled around $ 1.2 million. Her intention was to move into the apartment for a short vacation before returning to San Francisco.

"We had planned to go home in August," said Ms. Hollis. “And then we changed our minds and said, 'Let's stay. The school is not open. What's the point of going back? ’"

In the months that followed, they kept planning new departure dates just to change their minds. “We thought, 'Okay, we'll be back for Christmas,'” said Ms. Hollis. "Then we didn't come back over Christmas."

It wasn't until April of this year that they finally returned to San Francisco. However, after years of experience with island life, they now plan to return as often as possible.

"When you are lucky enough to buy a second home, you always have that kind of sadness when you say, 'Can you imagine a time we could live there full-time?'" Said Mr. Heathcote.

After doing just that, Ms. Hollis summed up the experience succinctly: "It was magical."

Austin, Tucson and Portland Are on the Quick Monitor to Restoration

Houses for Sale in Brooklyn, Manhattan and the Bronx