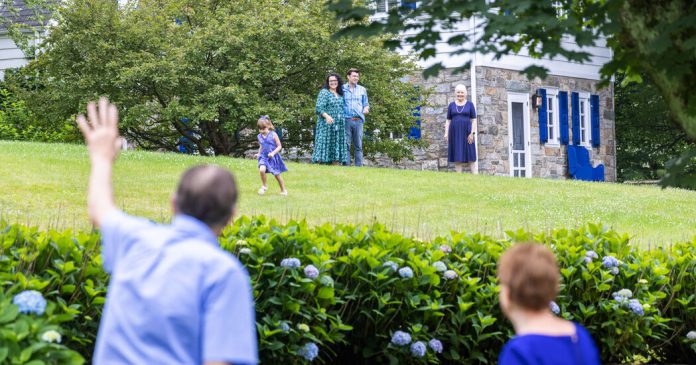 "You hear stories about children fleeing the pandemic to be with their parents and the opposite happened to me," said Jose Madrigal Jr. "And honestly it feels great." Namely, his parents are fewer inclined to complain about his stereo as previous tenants.

"I don't think he ever thought he would live with his partying college kid," said Bianca Colasuonno, a Compass agent who has known the family for years, of the older Mr. Madrigal, but they did stand in front a complicated decision.

After losing their Astoria tenants, the couple tried to sell the property for a few months but were not happy with the offers. Moving to the Astoria home meant foregoing additional rental income, and the couple likely won't sell their Manhattan apartment anytime soon, as the market there is slower to recover and less resilient than other parts of the city.

However, the couple feels most at home in Queens, where their two-family house is located on a residential street with two outdoor areas. Traveling to nearby Flushing to see their eldest son, wife and granddaughter has also become easier. "We are closer now than we probably ever were," said the senior Mr. Madrigal.

For the Craftses, who joined three households to buy a sprawling piece of land in Weston, Connecticut, their unusual needs meant they had less competition for their property, at least when compared to the hot demand in the single-family market.

"It was one of those properties that didn't work for everyone," said Kristi Law, a realtor with William Pitt Sotheby’s Realty, who helped them buy the home. While many local listings sold within days or weeks, this link, which had been in the market for a few months, was bigger than what many buyers were looking for. Nevertheless, the purchase was urgent: when the Craftses sensed other bidders, they made an unseen offer after their first video tour in February; They are closed in May.

They went well with the property. The original owner, Alice DeLamar, a philanthropist, built the property in 1931 as an artist retreat. The new owners are also creative: Ms. Scherer Crafts and Mr. Crafts are multimedia producers who recently completed a documentary about the children's show “Street Gang: How We Got to Sesame Street”; Mrs. Scherer Crafts' mother, Jackie, is an artist and former owner of a craft shop; and Mr. Crafts' parents are professional singers and singing teachers. Although none of them lived in Connecticut, they all grew up on the east coast, where much of the work of the Craftses is now.