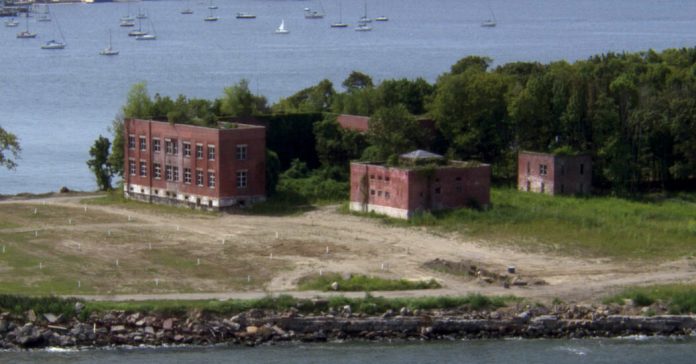 1654 – Island that the English doctor Thomas Pell bought from the Indians.

1868 – The city Department of Charities and Correction is buying the island for a new city burial site called City Cemetery. Public burials begin the following year and continue to this day.

1885 – The pavilion, an insane asylum for women with 300 patients, is being built. The institution closes in 1895 and is later used as a canteen and workhouse for young men imprisoned on the island. It is also used as the Phoenix House shoe factory in the 1970s.

1931 – Laying of the foundation stone for the Catholic chapel. Built on urban land, it was used by several denominations until 1966.

1950s – Two anti-aircraft missile silos built by Nike. After the shutdown, the hatches to their underground magazines will be sealed.

1967 – Phoenix House begins to use an old tuberculosis hospital with an unknown construction date for drug treatment.

1976 – Phoenix House has been ordered to vacate the island as ferry traffic was restricted during the city's financial crisis. Vandals start damaging buildings.

2015 – A draft report from the internal building department recommends the demolition of 13 derelict buildings and the fencing of the pavilion and chapel. She also recommends the "immediate repair" of the centuries-old plywood store and a pumping station.

2016 – New York State designates all of Hart Island for its historical, architectural, and archaeological significance for inclusion on state and national registers of historic sites.

2019 – City laws are being enacted to transfer control of the island from the Ministry of Justice to the Ministry of Parks by 2021 and to make the city cemetery more accessible to the families of those buried there.

2020 – A draft internal report from the Buildings Department states that "two meter high chain link fences with lockable gates are viable options for 16 vacant buildings," but recommends demolishing all 16.

June 5, 2021 – The building authorities, citing public safety, issued an emergency ordinance for the "immediate demolition of 18 unsafe and dangerous buildings", including the pavilion, the chapel and the paving warehouse.

July 1, 2021 – Control of the island is legally transferred to the Parks Department, although the Correction Department will continue to operate the island for a short time.

July 14, 2021 – To resolve "questions and concerns" regarding the proposed demolition, Office of Comptroller Scott M. Stringer approved an amended emergency application from the city to hire a site manager to set the schedule, scope and pricing of the project. In order to be able to carry out the demolition in an emergency, the city still has to obtain the final approval of the audit office.