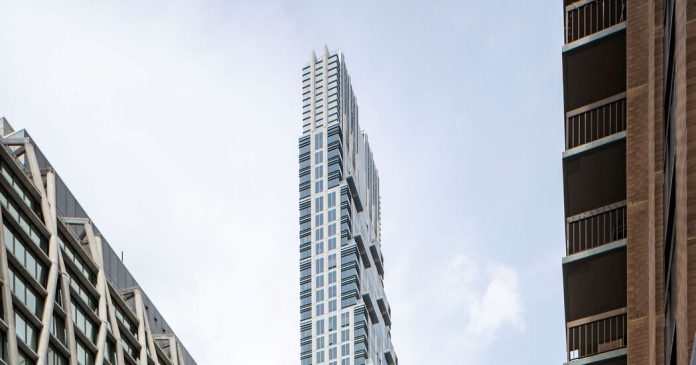 Chris Giordano, president of the West 64th-67th Street Block Association, called it a bait-and-switch. “Even if you eliminate the problem of shadows in your neighborhood and a skyline drawn by a building that is too tall,” he said, “we still find it immoral. We want there to be reasonable development, but that's not what they're doing. "

Two groups, Landmark West and the City Club of New York, a nonprofit focused on smart urban development, filed lawsuits with the Board of Standards and Appeals, opposing the empty spaces, arguing that the height of the building was a threat to represent the city's fire brigade. Each appeal went to the state Supreme Court, where City Club argued and won its case (which Extell is now appealing) and Landmark West awaits a trial to represent its final appeal.

When the City of Construction Department asked Extell to change its design in early 2019, the builder came back with a proposal that still includes three mechanical rooms, which together reduce the overall height for mechanical rooms by just 4 feet from 192 to 176 feet.

The opposition groups are claiming at least a partial victory from this ongoing saga: In 2019, New York City Council voted to close the zoning gap that left excessive gaps.

"That doesn't nip it in the bud, but it does make it a little more difficult," said Khorsandi. "Billionaire’s Row is now 15 years old and people are just starting to see what’s going on there," he said. "They're driving out the sky and driving out the public."

In 200 Amsterdam, a 52-story condominium on 69th Street, developers not only bought unused building rights from neighboring buildings, but from several neighboring lots, creating a 39-page zoning lot that critics called. has been described "gerrymandered" to reach the desired height of 668 feet.

SJP Properties and Mitsui Fudosan America have spent the past two years in court and appear to have won. The Committee for Environmentally Sound Development and the Municipal Arts Society of New York, which filed the original lawsuit in 2018, called for the building to be downsized as the original building lot would not allow for such a tall building. In February 2020, a judge from the state's Supreme Court sided with community organizations and ordered the developer to remove the top 20 floors.