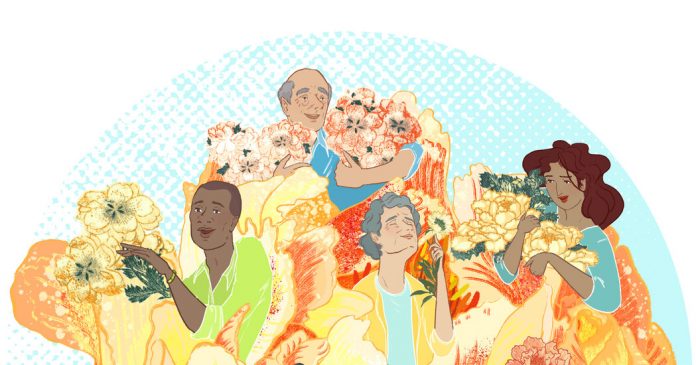 Two decades ago, just before my husband's favorite cousins, Mal and Marge, moved out of the home in Westport, Connecticut, where Mal had grown state-of-the-art rhododendrons, we were invited to dig up some, whatever size and quantity we were fit.

At that time I was barely out of college as a weekend gardener and was, let's say, pretty green. I was also concerned about appearing greedy. So instead of going for the big, sturdy bushes that Mal generously and wisely pressed upon me, I walked lightly with half a dozen delicate specimens, all about the same age as our toddlers. They will all mature together, I thought.

Transplanted to a piece of land right next to the driveway, the rhododendrons only thrive temporarily despite my diligent care (for the record, my now adult offspring are fine). But I don't mind. Well, I don't mind that much. Whenever I walk past them, I think of the late Mal and smile. Every serving of the soil nutrient Miracid that I serve pays homage to him.

Part of the attraction when I started gardening was the opportunity for solitude; it was a pointless escape from husband, children, and work. Wheelbarrow, equipped with a trowel, loppers, rake, and tiller, I walked up a path perpendicular to the stone wall to pull up the rocks and roots that stood in the way of my ambitious, if vague, beautification plans.

Today, after about 20 years, this pursuit is not at all lonely. I am now surrounded by plants that once belonged to important people in my life, and I feel their presence keenly. This is not my garden; It is my community garden.

Mal was the first of many benefactors. I did very well with the boxwood he gave me; it kind of makes up for the rhododendrons. The blooming nettle that lines the stone wall at the back of the house comes from my best friend Arlene's garden; a particularly graceful fern from my friend Susan's garden. I only have Iris around the big rock in front of our house because my friend Nancy dug it up and shared it for me. It's also because of Nancy that I've had a canna lily for three weeks in a bed right next to our deck near the garage that is sprouting large, shapely leaves.

Just as cooks share their recipes, gardeners share their plants. My sister-in-law built her backyard lot on the generosity of a friend who moved to North Carolina from Connecticut and invited her to forage. The booty included a jumble of lady's mantle, barrenwort, sun hat, and phlox.

An elderly neighbor, who saw me walking our dog one morning, admiring her trumpet and Asiatic lilies, surprised me a few days later with several blooming clusters. Detailed planting instructions were followed by the story of how she met her recently deceased husband. (She was his much younger secretary, and even though they were married to other people, they fell madly in love – his first gift to them was flowers, guess what – and ran away together. My neighbor who became a good friend , died half a dozen years ago, but the lilies she gave me come back faithfully every midsummer.

I have often received advice along with the supplements – about grouping plants in odd numbers to increase visual interest, about the importance of soaking the root ball thoroughly before planting, about the folly of raking a bed during spring cleaning, in the process of extracting the heat they need from sensitive plants and in the desire to create a bed of flowers with different flowering times to ensure color throughout the season. Then there was this: plant hostas and daylilies if you have to, but understand that all you are doing is providing a Bambi buffet. Did i listen? Unfortunately, I have not.

I try very hard not to think about how much I spend each summer on what I call outdoor decor. When I was new to the game, I was innocently delighted with the range of free stuff from someone else's garden. Take this, Home Depot. It never occurred to me to wonder whether I liked Egge or not. It went into the ground. And it didn't cross my mind to worry about the results. If that harrow or hydrangea didn't last because I watered too much or too little; whether I planted them in a sunny spot when shade was needed or vice versa, it doesn't matter – I was a rookie.

But if I now make a hashish from a friend's dianthus or butterfly bush, I can no longer rely on ignorance or inferior soil. I can no longer trace it back to the fickle ways of nature. I not only have the feeling that I have failed with Staude, but also with my friend and am therefore unworthy of further contributions.

On the other hand, it is especially gratifying when these traditional plants flourish.

GameStop Hit With Breach of Contract Case Over Alleged $30M in...

Bell Companions Announce Sale of Twenty-Three House Communities Throughout The US...