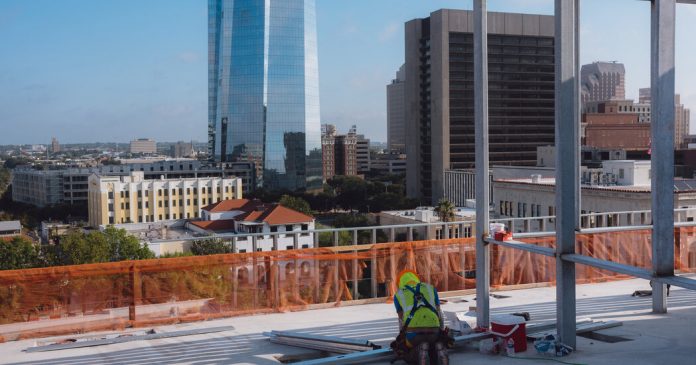 When the 23-story Frost Tower opened in downtown San Antonio in 2019, the eight-sided glass wind turbine represented a resurgent decade of downtown development. It was the city's first new office tower in three decades.

For Randy Smith, CEO of Weston Urban, one of the developers behind the project, this was the start of a new wave of activity. Now that the offices have arrived in the city center, there is a new stream of residents.

One of the company's next major projects, a 32-story brick residential tower a few blocks away, is set to break ground this year. "The Frost Tower is that great, big visible symbol of a new downtown era," said Mr. Smith. "And the residential tower will be the same."

But community officials are resisting some of that growth, saying the new office and apartment towers encroach on the city's historic neighborhoods that have formed a cultural core of Mexican-American heritage.

"San Antonio has beautifully preserved historic downtown, historic buildings, and the River Walk, and that's the image the city conveys to the world," said Ian Caine, director of the Center for Urban and Regional Planning Research at the University of Texas in San Antonio. "On the other hand, it is one of the fastest growing cities in the US, known to be bicultural and minority majority, and one of the most segregated and poorest cities in the US."

"As San Antonio moves forward, it tries to understand these competing stories," he added.

Often overlooked when compared to Texas’s other major cities, San Antonio has been one of the fastest growing metropolitan areas in the US for years. The population has grown 8.1 percent over the past decade, and it is projected that one million more will be welcome by 2040. The developers are moving at a similar speed.

A number of major projects will support the recent growth in the inner city. The $ 700 million Lone Star District is slated to break ground this year; Essex Modern City, a $ 150 million multi-purpose district, has finally cleared financial and regulatory hurdles; and the second phase of redevelopment within Hemisfair will lay the foundation this fall. Other notable projects include a solid wood office tower called Soto, a $ 450 million renovation of the historic Alamo Plaza, and the development of new parks and green spaces along San Pedro Creek.

"San Antonio is still under the radar and, in my opinion, the best-kept secret in the US," said Jake Harris, managing partner at Harris Bay, a Sacramento-based developer who is behind numerous projects in San Antonio. including Essex Modern City. "The growth isn't priced into real estate yet, and you can still get a good deal of business with institutional capital coming in."

The nexus that ties these threads together could be the major addition to the University of Texas downtown San Antonio campus, which held a hands-on groundbreaking ceremony in January. The university, expected to attract 15,000 additional students over the next decade, is adding roadscapes and academic facilities, including the $ 90 million School of Data Science and the National Security Collaboration Center, to fuel growth in the industries of the future to advance.

The ability to develop this location feels like creating a "complete district," said Corrina Green, assistant vice president of real estate, construction and planning at the university.

The expansion has the potential to be an incubator for development, but it is also likely to spur more downtown commercial and residential development, which worries some community groups.

Over the past few decades, San Antonio's relatively small, walkable downtown area has been overtaken by the growth and development of the suburbs – in part due to streets that follow the route of the Spanish colonial irrigation canals called the Acequias. The higher-income suburbs already offer 26.4 million square feet of office space compared to 4.9 million in the inner city.

Early projects indicated the area's potential, notably the redevelopment of a brewery by Christopher Goldsbury, a former managing director of Pace Foods, that became the Pearl District, an entertainment destination. But investments began to grow significantly in 2010 when former mayor Julián Castro launched the Decade of Downtown initiative.

That has shifted the traditional calculus of downtown building, said Kamil Alavi, partner at GrayStreet Partners, which is developing the Lone Star site. Projects that required the demolition and replacement of old buildings were neither cost-effective nor some with vacant lots, although those boundaries encouraged adaptive reuse that highlighted the city's architectural heritage.

There are more options now with 2.4 million square feet of downtown real estate under construction, said Ryan Metz, a realtor advisor at ECR.

"There is a mismatch between the demand for real estate and what is currently in the downtown area that cannot be met anytime soon," Alavi said.

This demand and need for new housing has worried proponents and community members in the Westside, a neighborhood of small shops or tienditas and tightly knit single-family homes that are a source of affordable homeownership for low to medium incomes, whose homes are often inherited across generations .

"This is where people have lived for generations, this is where the Chicano movement began, and there is so much rich history," said Levar Martin, chief program officer for the National Association for Latino Community Asset Builders, based in San Antonio. “It's not just about maintaining the housing stock. It's about the culture and people's lives. "

Promoting affordable housing and the recognition of historic architecture, the Esperanza Peace and Justice Center is restoring 11 historic "casita" houses and buildings and building a museum that sheds light on the history of the Westside around the Rinconcito de Esperanza, a historic cultural district , to accomplish.

The Decade of Downtown initiative invested in apartments for newcomers but not for those who had lived downtown for generations, said Graciela Sanchez, the center's director.

“This neighborhood is the Ellis Island of the Mexican Americans,” she said, and she has fought for its protection and last year responded to community protests against plans to demolish and rebuild the Alazán-Apache Courts, a historic public housing project, connected.

City and housing authorities wrestle with what's next, especially when it comes to access and affordability. Earlier developments focused more on increasing the total number of homes in the downtown area, said Mia Loseff, a policy analyst with Texas Housers, a nonprofit focused on low-income housing. New policies and incentives need to be better tailored to promote housing for all income levels and recognize that "the most affordable housing is the structures we already have," she said.

Half of the affordable housing in San Antonio is unsubsidized and therefore more subject to market forces. Groups like the Esperanza Peace and Justice Center and others have promoted land trust development and targeted investments to help homeowners.

Mayor Ron Nirenberg and his administration have raised funds to invest in housing, including raising funds for affordable housing and establishing a $ 1 million risk reduction fund in 2019 to help residents displaced by development who will receive $ 4 million in additional funding this year.

The city plans to finalize a new strategic housing plan that includes proposals to incentivize private sector development and create 28,000 units over the next decade that will mainly support low-income residents. And in May, the city will vote on a proposed $ 250 million bond to finance construction, maintenance and land banking.

Now is the time to find the right formula to preserve the city's heritage and maintain affordable housing, said Martin of the National Association for Latino Community Asset Builders.

"I understand that the city wants to use the culture, but equitable conservation for the people has to follow," he said.

New Supertalls Take a look at the Limits, because the Metropolis...