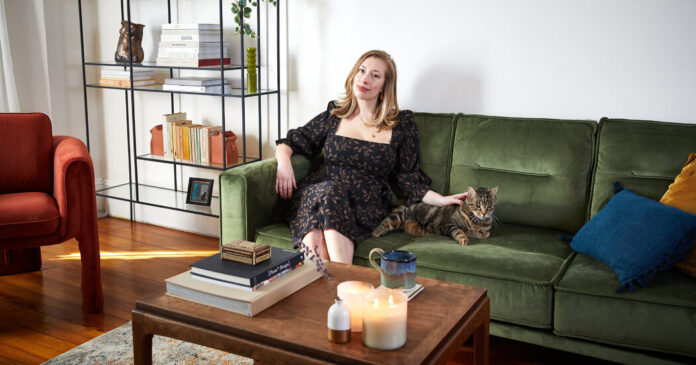 In Olivia Tarplin’s living room, a pair of terra-cotta-colored velvet chairs face each other as if in conversation, basking in the light from an adjacent bay window. A shelf behind them holds a neat stack of art books and cookbooks, a row of old paperbacks once owned by Ms. Tarplin’s mother, and a bronze bust of a woman’s torso which, though armless, appears to stretch toward the window’s light.

This three-bedroom apartment in Jersey City Heights marks Ms. Tarplin’s first time living alone. Decorating it has provided a source of unexpected creative fulfillment after relocating from an apartment where she’d endured the traumatic flooding of Hurricane Ida last August. “It’s been very healing,” she said. “Being on my own, it has been so nice to have control over everything in my day-to-day.”

Ms. Tarplin, 29, is a Jersey City native: she grew up downtown, then her family moved to the nearby town of Maplewood when she entered high school. After her parents divorced, she and her mother, Jo Imeson, moved back downtown in 2010, and lived together — aside from the year Ms. Tarplin spent at the New School dorms in Manhattan — until Ms. Imeson moved in with her boyfriend in 2016.

The last apartment they shared was a two-bedroom on the ground floor of a brownstone with a spacious backyard where Ms. Tarplin hung string lights and a hammock. The apartment had been severely damaged during Hurricane Sandy in 2012 and remodeled with marble floors and walls. Ms. Tarplin and Ms. Imeson moved there in 2015, and during the first few years saw barely any flooding: just a few occasional puddles after a big storm, but nothing their trusty water vacuum couldn’t handle. One big storm in 2020 flooded the bathroom, but the damage felt contained and manageable.

After Ms. Imeson moved out, Ms. Tarplin moved into the smaller bedroom and rented out the larger one, to minimize her own monthly costs. There were no closets, so she stashed much of the family memorabilia — photo albums, high school diaries, early D.I.Y. Halloween costumes — under her bed. The apartment was dark and cramped, but she loved the backyard: “That was my Zen space,” she said. “The yard is why I stayed there longer than I would have otherwise. I was like, ‘I can’t give up this yard.’”

Last summer, Hurricane Henri brought the apartment’s first major flood since Sandy, and “all hell broke loose,” Ms. Tarplin said. “Henri was the worst I’d seen.” Three inches of water covered the marble floors; she had to take off work to clean everything while her landlord sanitized the apartment.

She soon began to look at apartment listings online. “I wanted something fabulous — I wanted a fresh start,” Ms. Tarplin said. She began reaching out to brokers, but hadn’t looked at anything seriously when Hurricane Ida arrived two weeks later.

Ms. Tarplin, knowing the bathroom would flood first, had lined the room with towels and armed herself with the water vacuum, waiting for the floodwaters to come. After a few hours of working the vacuum, it broke. Soon, water came rushing through the front door. “At a certain point, I said, ‘We’re not gonna stop it,’” she said. “‘So let’s go to damage control.’”

As the water reached her ankles, her boyfriend came over to help. “I was watching some of my shoes and clothes floating by,” Ms. Tarplin said. “But I was like, ‘Forget that. What is like the irreplaceable stuff?’” She stacked all the photo albums and memorabilia on top of her bed and on a nearby shelf.

Soon, water came through her bedroom ceiling. She ferried her cats, Chloe and Charlie, who had been marooned on the bed, into their plastic carriers, and her boyfriend took them to his apartment.

Ms. Tarplin stayed. “I had to go down with the ship,” she said. “I sat upright in a chair all night. The water got up to my knees, and you don’t know when it’s gonna stop.”

Occupation: Senior manager of marketing strategy for a large retailer

The best sandwiches in the neighborhood: “There’s a really amazing Italian deli a ten-minute walk from here, Andrea Salumeria. It’s the kind of place where if you go in the middle of a weekday, all the cops and firemen are there— that’s a good sign.”

Her backyard plan: “I want to put up some string lights, maybe get another free-standing hammock. I have a little fire pit back there that I haven’t used yet. Because I work from home, and online, anytime I can get outside, I’m desperate for it.”

Eventually, it did. The following morning, Ms. Imeson came over to help carry everything out to the backyard to dry. Ms. Tarplin’s father, Howard, came by with industrial-size garbage bags to collect all the laundry he could do at his apartment.

Ms. Tarplin immediately began reaching out to the brokers she had contacted weeks before. She searched for short-term rentals, but almost everything looked sketchy, or was an Airbnb going for hundreds of dollars a night. Salvation came when Ms. Imeson visited her longtime acupuncturist, who mentioned she was looking to rent out the apartment below her own.

The apartment was in Jersey City Heights, slightly farther out from downtown than Ms. Tarplin wanted. There was no laundry, no dishwasher, and the listing specified “no pets.” But all she needed to hear was that the apartment was 16 steps up from the street; it was essentially flood proof.

Ms. Tarplin decided to move in until she found something long-term. The landlord approved her cats. She packed up everything in five days, and was moved in by mid-September.

During her first two months at the apartment, she was still browsing long-term listings. But many were small, expensive new-construction apartments. They lacked the charm she was growing accustomed to in the Heights: large bay windows, elegant archways, glass doorknobs, patinated wood floors. She began buying furniture under the assumption that she could move with it. One day, she said, “there was a point where I just didn’t want to leave.”

Since then, she has made the apartment her own. She has set up a guest bedroom, where she can host family and store her valuable keepsakes without letting them take over the décor of the rest of the apartment. The third bedroom is currently a catchall storage space she hopes to one day turn into a walk-in closet inspired by the one that the Actress Alicia Silverstone’s character Cher Horowitz had in the 1995 film “Clueless,” which boasted endless color-coordinate clothing racks. Supplementing hand-me-down antique pieces from her parents with inexpensive but stylish furniture became a therapeutic hobby: “This is my thrill,” Ms. Tarplin said with a laugh. This summer, she hopes to decorate the backyard.

She has come to love the neighborhood, too: There’s a laundromat five doors down with wash-and-fold, and a “fantastic” little coffee shop on her walk to the train. On her first day in the apartment, she met her next-door neighbor, who offered her heaps of kale from her garden.

“I had just had the hardest two weeks of my life. This lovely woman is giving me fresh-grown vegetables in the sunshine. Her beautiful little cat is rubbing against my feet,” Ms. Tarplin remembered. “It felt like being embraced into a warm hug after a horrible two weeks. It felt like a cartoon: ‘Welcome to your salvation!’”

What $2.2 Million Purchase You in California