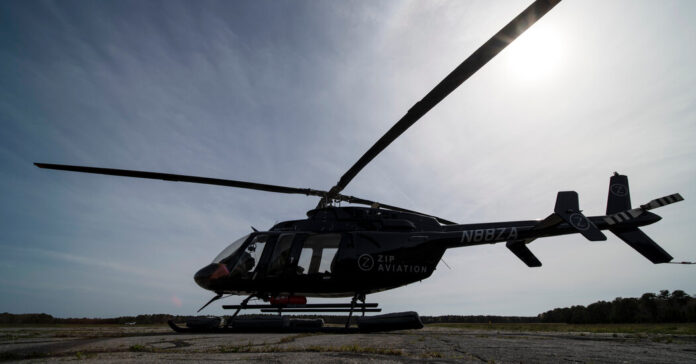 With the serene beaches of the Hamptons soon 3,500 feet below his box-fresh white sneakers, Rob Wiesenthal, the chief executive of Blade, a by-the-seat helicopter charter company, boasted how the service could slice above the slog of the Long Island Expressway. A New Yorker can go from Manhattan to East Hampton in 40 minutes, better than the expressway’s two-and-a-half hours — or sometimes six — with traffic.

Loud, fast, pay-per-seat helicopters have indeed changed commuting to the Hamptons for a growing number of people wealthy enough to spend upward of $700 one way for the convenience of zipping to the beach. But as more of the aircraft whir over the dunes, they have also changed a way of life on the ground, according to some people who live beneath their flight path. They say the helicopters’ blades rattle windows on the shingle-style mansions below, destroying property values as their growl forces poolside guests to shout across their cocktails.

Now the aircraft are behind another transformation of the town: Effective May 17, the East Hampton municipal airport will close after 85 years of operation. On May 19, the town will reopen the airport as a private-use facility; it can impose curfews and sharply curtail the number of flights. It was the result of residents below the path of the choppers making their own kind of noise: In 2020, with flights limited by the pandemic, complaints still poured in, including from those two households that complained a combined 4,638 times that season.

The closure of the airport marks the zenith of a longtime air-vs-ground battle that grew increasingly pitched in recent years as shareable helicopters expanded, boosted by a pandemic rush to sequester in the Hamptons. Two decades ago the town took the unusual step of declining federal grant money for the airport in an effort to eventually regain local control; last year that money ran out, giving way for more local control and restrictions by the Town of East Hampton.

Even so, as the summer high season looms, the din is far from quieting down: Arguing that the airport supports the fragile summertime economy, aircraft enthusiasts and entrepreneurs, as well as residents afraid that fleets of aircraft will divert to tiny landing strips in their neighborhoods, such as in Montauk, have hit East Hampton Town with several lawsuits.

Video ads featuring beloved local shopkeepers supporting the airport for drawing needed business to the area pepper social media, while plans for grass-roots campaigns to drive up noise complaints (and thus the case for closure) hatch in inboxes. Yard signs beseeching passers-by to either save or shut down East Hampton Airport seem as ubiquitous in the Hamptons as hedgerow.

All sides say selfishness (by others, not them) is to blame. Residents below the routes say they are besieged by egocentric helicopter and private jet passengers who don’t care about the toll their commute takes. They are rebutted by an unusual coalition of inconvenienced highfliers whose fun they are ruining, and salt-of-the-earth locals concerned for their businesses. They say a coterie of those privileged enough to own Hamptons real estate have taken down a municipal good in the name of their personal peace and quiet.

“Both sides are right in some respects: Yes, the airport has been here a long time, but it has changed, aircraft have changed, flight patterns have changed,” Mr. Schneiderman said. “It’s not really the same airport that it was.”

Before the pandemic, in 2019, about 30,000 flights took off or landed at East Hampton airport, according to data provided by the town. Though helicopters have made up less than a third of the flights, which include turboprop planes and jets, they routinely stir more than 50 percent of complaints, according to a study commissioned by the town. A spokesman for Blade would not disclose how many flights it deploys to or from the airport. Via email, NetJets, a charter and shared jet service, declined to comment for this article, or provide the number of flights.

Dan Rattiner, the founder of the local newsmagazine, “Dan’s Papers,” saw a bigger picture emerging when the town first held an abortive competition to bring a slick, world-class facility to its roughly 600-acre plot in the late 1980s. The issue goes beyond the airport, he said, to frictions over the changed identity of the Hamptons over the past decades; it has gone from elite seaside hideaway to glitz-stuffed scene.

“We went from wanting to get more and more people out here visiting, and more and more income, and more well-to-do money to save the place,” said Mr. Rattiner, who has lived in the Hamptons since 1955. “Well, that happened. Now the problem is, are we going to lose what they came out here to see — the windmills, the beautiful vistas, the sunsets, the beaches, the quiet?”

The issue has Shane Dyckman torn. The owner of Flying Point Surf School and Sagtown, a coffee shop in Sag Harbor, Mr. Dyckman appeared in a pro-airport ad sponsored by Blade (he was not compensated, he said). “The billionaires are definitely flying out in their Gulfstreams, the millionaires are taking the helicopters, and the locals have always been committed to having the airport there,” he said in an interview.

But after the venom he received from some customers over their lattes at Sagtown, he said he now regrets speaking out, and is for some limits. “It possibly got a little out of control, what hasn’t?” Mr. Dyckman said in an interview, of the airport. And for that matter, so have beach parking, the lines at the supermarkets and the traffic on Route 27, he added, “Have you driven here in the summer?”

John Kirrane, who retired from financial services, lives full time in the hamlet of Noyack underneath a route the aircraft take to the airport. “To take a helicopter from Manhattan to East Hampton because you didn’t want to spend the extra hour on a train or a bus or in an Uber, it seems like it is not really being appreciative of what we have out here,” said Mr. Kirrane, 65.

But Blade was selling that convenience in 2014 when it introduced its shared helicopters as an alternative to inching Out East on the L.I.E., or jammed into standing-room-only Long Island Rail Road cars. (A spokesman for NetJets would not say when NetJets began operating its East Hampton service.) In 2015, there were about 19,000 complaints from early July to the end of September according to HMMH, a Massachusetts-based transportation planning consultancy hired by East Hampton town to study the issue.

By 2019 complaints for the same time period had skyrocketed to about 47,000. The deluge of complaints that summer came from just 553 households, mostly along the flight paths, according to the study.

John Cullen, 62, an investor who lives in Jamesport, in the town of Riverhead, is one of those frequent complainers. On summer weekends, he averaged about eight a day, he said, when more than 100 aircraft skimmed over his home on a daily basis. Although it is on the North Fork of Long Island, separated by over 20 miles and Peconic Bay from the airport, it lay under a common flight path from Manhattan.

Though supporters of the airport say Mr. Cullen and a minority of residents are unfairly loading the dice for closure, Mr. Cullen said the low number of households complaining is not reflective of how many people are affected, just that few bother or know how to report.

Last year, in response to the outcry, many helicopter pilots switched predominantly to a route that skips Mr. Cullen’s house, instead flying over the Atlantic Ocean before hanging a left westward over the estates of Georgica Pond in East Hampton. (Mr. Wiesenthal of Blade notes that few complaints seem to originate there, where people like Steven Spielberg and Ronald Perelman have owned homes — and private jets.)

Under quieter skies, Mr. Cullen said he still calls in three to five noise complaints daily. “I want to stick with them,” Mr. Cullen said. “I have been relieved of the pain, but the pain was awful.”

Whether helicopters buzzing over the Eastern white pines, or jet rumbles competing with cawing cormorants actually impacts the value of a property as some have claimed, seems unlikely, said Paul Brennan, an associate broker with Douglas Elliman. Particularly in light of the pandemic, he added, which escalated demand for Hamptons housing — wherever it is.

“We have houses on the highway that are selling like hot cakes, whereas before no one would touch them,” Mr. Brennan said. “Does the airport affect the value of property? No. Does it affect the quality of life? Yes.”

On both sides of the tarmac is an immense amount of wealth, a situation that has led some to frame the dispute as the one percent vs the two percent: millionaires (the visitor who can shell out hundreds for a helicopter seat) vs. billionaires (the Hamptons landed gentry they buzz above).

It is a characterization that some people on both sides deflect: In the shut-it-down camp, many insist it isn’t just about their garden parties being ruined, but their concerns for the environment — even as they urge people to sit in L.I.E. traffic instead.

Mr. Kirrane said it was not who was flying that bothered him, but what he perceives as disregard for those trying to enjoy the osprey and sand dunes below. “It’s that whole issue of ‘my hour is more important than the hundreds of hours of disruption for the people below me,’” he said.

For Andy Sabin, 76, a resident of the hamlet of Amagansett who owns an international metals company and has shares in three private jets, the wealth of those flying is part of why the airport is a vital economic driver that must be saved.

“People are going to get here one way or another,” said Mr. Sabin, who is also a philanthropist and who has joined one of the lawsuits before Suffolk County Supreme Court seeking to stop the closure of the municipal airport. He has spent his own money on pro-airport ads in the local papers. “A lot of the wealthier community, we provide the jobs, everything from the dishwashers to the construction guy, the farmers to the landscapers to the weeders. Where do you think their jobs come from?”

In an interview, Mr. Wiesenthal of Blade distanced his company from wealth and compared his shared helicopter fleet to mass transit, even airborne city buses. He said that he declined a request for Blade to appear in the T.V. show “Succession,” about a dysfunctional and fabulously wealthy Hamptons family, to avoid any taint of excess. “That’s not a look we want,” he said.

A spokeswoman for HBO could not confirm the interaction, but did confirm that Blade does not appear on the show.

Mr. Wiesenthal said he wants to be a good neighbor. Blade says it has plans to engage a future fleet of what are known as Electric Vertical Aircraft, nearly noiseless electric craft.

But above it all — quite literally — on a recent Thursday, Mr. Wiesenthal sat in a Bell 407 helicopter and said that despite the commotion on the ground, he was planning for his company’s busiest summer yet. If East Hampton airport is mostly out of the picture, there’s always the helipad in Southampton Village, Montauk Airport and Francis S. Gabreski Airport in Westhampton Beach.

Plus, who needs an airport? Blade is already landing seaplanes in Peconic Bay.