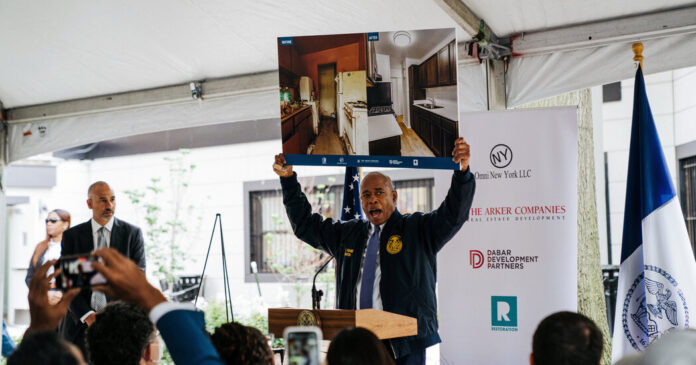 Shortly after becoming mayor of New York City, Eric Adams said he would roll out a “comprehensive housing plan” within a couple of weeks to tackle the rising housing costs and homelessness that have made the city an emblem of a growing national crisis.

But four months later, Mr. Adams has yet to make good on promises he made during his campaign and has dialed back at least one, prompting criticism over how strong a priority he has placed on a top issue for many New Yorkers.

The details of the plan are still being worked on, ahead of an expected release next month. It will arrive as rising rents and the end of pandemic era safety nets are building pressure on the new administration to aggressively address a seemingly intractable set of problems that Mr. Adams inherited and that have an enormous impact on the city’s economy and social fabric.

“I do think what we’re seeing with rising rents now, it was really unimaginable just a couple of years ago,” said Rachel Fee, executive director of the New York Housing Conference, a nonprofit group, who was listed as a contributor for a housing committee on Mr. Adams’s transition team. “It has to be a top issue for the mayor. I do think City Hall has to address it with more urgency.”

Members of the City Council, which is negotiating the budget with the mayor, have also called for more spending on building and preserving affordable housing, after Mr. Adams proposed only a modest increase over the previous administration’s spending for the next several years in his capital budget plan.

At a rally on the steps of City Hall last week, Pierina Sanchez, the chair of the City Council’s housing committee, said, “New York City needs to treat the affordable housing crisis, the housing crisis, like the No. 1 problem.”

Adrienne Adams, the speaker of the City Council, echoed calls for a bigger investment in a “State of the City” speech last weekend.

The mayor has defended his pace, even as a staffing shortage in the Department of Housing Preservation and Development has hobbled the city’s ability to move ahead with affordable housing projects.

“I know it feels like I have been the mayor for five years, but I’ve been here for five months,” Mr. Adams said at a news conference last Friday. “I’ve inherited a broken city, with broken systems. We can either put a Band-Aid on top of these broken systems, or go to the core and fix them.”

But he added, “There’s no rush to doing this. We’ve got to get it right.”

In New York City, roughly one-third of renters are “severely rent-burdened,” meaning they spend more than 50 percent of their income on rent, according to a survey of the city’s housing stock issued last week.

More than 48,000 people slept in New York City shelters each night in March, according to the Coalition for the Homeless, with the number of single adults in shelters increasing steadily over the last several years.

The pandemic accentuated many of those problems, as tens of thousands of people struggled to afford rent or mortgage payments and sought government assistance.

Many places across the nation are grappling with housing affordability, and there is a growing recognition that a root cause is the shortage of available homes.

This week, President Biden announced a new plan to address the housing crisis that would incentivize reforming zoning laws to allow for more density, among other provisions.

The city’s affordability crisis has been underscored more than once in recent weeks. A report released this month by the brokerage firm Douglas Elliman showed that rents in some parts of the city are continuing to surge: In Manhattan, for example, the median effective rent in April 2022 was $3,870, more than 38 percent higher than a year before and the highest level ever recorded.

A panel effectively controlled by the mayor recently voted to back some of the biggest rent increases in nearly a decade for rent-stabilized homes — where more than two million people live, many who are lower income. Evictions are slowly on the rise, after the state’s pandemic moratorium expired in January.

The forthcoming housing plan is likely to include provisions to cut down on homelessness, improve the conditions in public housing and boost homeownership opportunities for middle-income and lower-income New Yorkers, according to testimony from housing officials.

During his campaign, Mr. Adams made solving the housing crisis and housing shortage top issues.

He said he would double the city’s capital investment in housing, including public housing and the preservation and development of affordable homes, to $4 billion annually, roughly double the amount spent by the previous administration.

Instead, Mr. Adams has called for spending on average $500 million more every year for the next 10 years.

Mr. Adams also promised to reform zoning rules that keep many neighborhoods from building bigger buildings, particularly in wealthier neighborhoods — which he called “sacred cows — that have resisted new development.

He specifically pointed to blocks within a swath of Manhattan — from 14th Street to 42nd Street, and between Park and Ninth Avenues — as targets for rezoning.

Mr. Adams did not answer questions last week about whether that would still be part of the housing plan. And even when a plan becomes final, it is not clear his housing agency has enough staff to carry it out.

In May, Adolfo Carrión, the city housing commissioner, said staffing remained “one of the biggest challenges that we face.”

The city has moved to fund 77 new positions at the department, but it is not clear how quickly the city can fill them or how much of an impact they will make. Mr. Carrión noted that while the agency’s housing inspector corps has the budget for nearly 470 inspectors, it is short more than 140.

The staffing situation is so dire that the department has posted a notice on its website, warning some applicants for city subsidies that because of “limited staff capacity and a significant backlog of projects,” it will take “up to a year” to assign them a project manager.

The mayor did not respond to questions about the impact of the shortage.

Previous administrations also took several months or longer to develop housing plans. Mayor Michael R. Bloomberg issued his housing plan in December of his first year in office, and while he is credited with helping redevelop the city and securing affordable housing, critics also blame his plans for allowing for displacement and inequality.

Mayor Bill de Blasio, who made housing a centerpiece of his campaign, issued a housing plan roughly five months after he took office that ultimately evolved into a goal of building or preserving 300,000 affordable homes by 2026.

While that was a significant increase in investment compared with previous administrations, the plan drew criticism for focusing too much on numerical targets and too little on affordability for lower-income families.

The plan, which the city says is being formulated with input from people who have experienced homelessness and public housing residents, will focus on measuring how quickly people can get into affordable homes as well as the overall number of units filled during a specific time period, the mayor’s office said.

“It doesn’t come out on Day 1,” said Moses Gates, the vice president for housing and neighborhood planning at the Regional Plan Association, a nonprofit group, of the housing plan. “It takes collaboration and it takes some real nose-to-grindstone kind of work, and I think that it is still early in this administration.”

Beverly Rivers, 66, has lived in a rent-stabilized unit in the Flatbush neighborhood of Brooklyn for 25 years, and her $1,009 rent already exceeds the money she receives from disability payments, her only income.

Any rent increase will add to the more than $8,000 she said she owes her landlord, who sued to evict her last month.

Ms. Rivers said she voted for Mr. Adams, believing he would fight for poor people, but she was disappointed that he did not support a rent freeze or rollback.

What $1.four Million Buys You in New York, Illinois and Massachusetts

Is Now a Good Time to Hire a New Condominium?

Can I Nonetheless Gown All in Black?