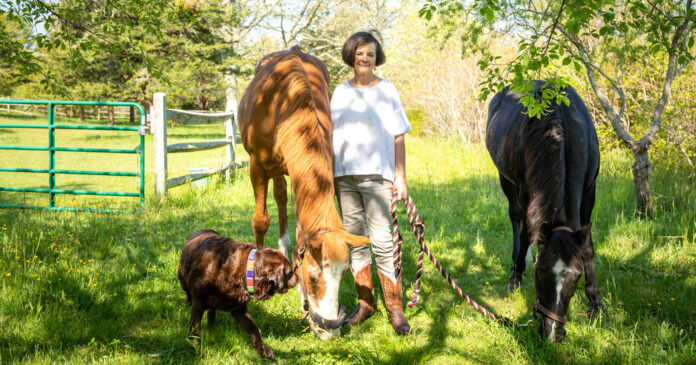 For the decade that Geraldine Brooks was a foreign correspondent for The Wall Street Journal, she kept a packing checklist in her bedside table drawer that included field dressings, a chador, a bulletproof vest and what she called a “king” suit — a set of good clothes, in case a dictator invited her to tea. But it wasn’t until a dictator threw her in prison, instead of inviting her to tea, that she put the kibosh on that chapter of her career and sent herself home.

It was 1994, and the activities of the Shell oil company in Nigeria had been poisoning the villages of the Ogoni people. When the villagers began to protest peacefully, Gen. Sani Abacha, Nigeria’s dictator, sent in the military. Ms. Brooks began reporting on the atrocities his troops were perpetrating on these impoverished subsistence farmers; when she approached the military command for comment, she was detained for three days.

“I was in the slammer,” Ms. Brooks said, “and I didn’t know how long they were going to keep me. And that was when I realized, ‘Whoops, if we’re going to have a family, we’d better get cracking.’”

And perhaps change careers. A decade and a half later, Ms. Brooks and her husband, Tony Horwitz, the author and journalist who died in 2019, were safely ensconced on Martha’s Vineyard, in a slightly askew, hand-hewed post-and-beam house with a spectacularly sagging roof, most of it built in the mid-18th century, on five meadowy acres. They had two sons, and two Pulitzer Prizes between them.

Ms. Brooks’s career pivot has worked out rather well. She is now the author of five best-selling historical novels. Her second, “March,” which imagined the life of the absent father from “Little Women,” won the Pulitzer Prize for fiction in 2006. (Mr. Horwitz won his Pulitzer in 1995, for reporting on the inhumane labor practices at poultry plants and other low-wage American industries, for The Wall Street Journal.)

Ms. Brooks’s sixth novel, “Horse,” out next week from Viking, tells the history of the Black horsemen — the trainers, jockeys and grooms, mostly enslaved people — behind the massive horse-racing industry in the antebellum South. The story landed in her lap several years ago, when she met an executive from the Smithsonian Institution, who told her how he had overseen the delivery of the skeleton of a stallion named Lexington, perhaps the most famous stud horse of all time, to the International Museum of the Horse, in Kentucky. (It had been languishing for years in the Smithsonian’s attic.)

On journalism versus fiction: “In journalism, you often know more than you can write. You have an instinct, but you can’t use it. But in a novel, that instinct is the story. You get to the line of fact and you can take a swan dive into ‘it might have been like this.’”

At first, Ms. Brooks thought she had found a subject for her husband. Mr. Horwitz’s books blend his distinctive, rollicking form of participatory journalism with historical reporting: His last book, “Spying on the South,” was on the dispatches of Frederick Law Olmsted, who reported on the South for The New York Times in the years before the Civil War, long before he was known as the celebrated landscape architect of Central Park.

But while Lexington’s life was well documented, the story behind the horse’s Black groom was a mystery. Imagining who he was became the fodder for Ms. Brooks’s new novel.

It helped that she was a horse person, although she began to ride only a decade ago, when she had a blissful trail ride on a writer’s retreat and returned home wanting more. A horsy friend assessed Ms. Brooks’s meadows and said, “You’ve got space here. You could have a horse. In fact, you could have my horse.”

“I should have asked a lot more questions,” Ms. Brooks said. The friend’s horse was a spirited palomino, prone to bucking. After one particular toss, Ms. Brooks broke a bone in her pelvis and was on crutches for six weeks. It took a few more tosses before she found the horse a more appropriate home, and herself a more appropriate mount, a pony named Valentine with a disposition to match.

Apart from bucking horses, not much seems to rattle Ms. Brooks, a native Australian with a steady gaze and an arch sense of humor. While her husband was a man in constant motion, Ms. Brooks was the calm and amused axis around which he spun.

The couple met at the Columbia University Graduate School of Journalism and married in 1984, but it wasn’t until 2010 that they bought this house. The land was the site of the island’s first gristmill, built in the late 17th century. The house has three parts, which explains its dizzying floor pitches. In many rooms, furniture legs are propped with shims to stay level. The heart of the place is two “two up, two down” houses, as early colonial houses were often called, that were stuck together, Ms. Brooks said, in the mid-1700s; a third section, which they turned into their kitchen, appeared some time later.

“They like old,” said Michael Lewis, the “The Big Short” author, of Ms. Brooks and Mr. Horwitz. In the late 1980s, the three were neighbors in a house in Hampstead, London. “They have this tendency to move into really uncomfortable places and make them as comfortable as possible. They lived the way everybody imagines writers live — these textured, nuanced lives in these textured, nuanced places.”

Ms. Brooks, 66, grew up in inner-city Sydney, in a century-old Federation house. A bookish, curious child, she was also an ardent “Star Trek” fan, which is how she found herself, decades later, living on Martha’s Vineyard. Through a Mr. Spock fan club, she made a pen pal of a girl from New Jersey named Joannie who spent her summers with her family in a place called Menemsha, which Ms. Brooks later learned was a village on Martha’s Vineyard. She never got to meet her correspondent, who died from complications of anorexia just before Ms. Brooks arrived in New York for grad school. But she was determined to visit the mythical land of Menemsha that Joannie had written about so often.

Ms. Brooks and Mr. Horwitz fell in love with each other, and the island, on their first trip there. When he died of a heart attack during his book tour for “Spying on the South,” collapsing on a street in Washington, D.C., Ms. Brooks was at home on Martha’s Vineyard. It was days before she could see his body, and the immense bureaucracy of death, as she put it, took nearly a year to sort through. The pandemic, which arrived soon after, has been a strange blessing.

“I could be quiet, and I didn’t have to pretend that things were normal,” she said. “I could just hide out here with the boys, and it was what we needed.”

On a recent foggy morning, Ms. Brooks was at her usual spot at the head of an English farm table in her kitchen, a wet dog at her feet (the property has a pond and a stream). With its capacious fireplace and enormous Vulcan stove, the kitchen is command central for her. She often writes here — proximity to a fireplace is essential to comfortably surviving a damp Martha’s Vineyard winter in a nearly 300-year-old house. And because the ancient Vulcan is the size of a tractor, she can feed a crowd, which she often does.

Pulling on a pair of muck boots, she gave a visitor a tour of the property. The meadows were ankle-high with wildflowers and native grasses. Ms. Brooks practices no-mow May, to give the pollinators a chance to flower. Her overall approach to landscaping, she said, “is to try and figure out who wants to be with us and give them what they need. That means planting native species, trying to remove the invasive ones when you can and providing specific habitats for the different species you want to help out.”

Bird boxes dot the property, perched on high posts. There’s a hibernaculum, or snake house, a shallow ditch covered with stones for snakes to winter in. “I’m really proud of it,” Ms. Brooks said, beaming. “This is a snake’s idea of a $6 million beachfront property.”

Valentine, still bushy with her winter coat, grazed in the turnout by the barn, along with her companion, Screaming Hot Wings, a retired racer who belongs to a neighbor. “Horses are pack animals,” Ms. Brooks said. “They aren’t happy alone.”

Mr. Lewis described Ms. Brooks and Mr. Horwitz as “literary souls with moxie,” though their work as historical authors didn’t often dovetail. Mr. Horwitz was particularly consumed by the Civil War, and Ms. Brooks has investigated 17th-century England (in her 2001 novel “Year of Wonders”), colonial Martha’s Vineyard (“Caleb’s Crossing,” from 2011) and Bronze Age Israel (“The Secret Chord,” from 2015, about King David).

“It was self-preservation,” Ms. Brooks said, “to try and find a way to connect with that interest of his. Otherwise, I’d go crazy.”

Her strategy was a success. Mr. Horwitz was an enthusiastic booster of “Horse.” He brought her material from the Museum of the Horse in Kentucky while he was researching “Spying on the South.” And he liked to tease Ms. Brooks if she procrastinated: “Doesn’t look like ‘Horse’ is galloping to the finish line today.’”

When “Horse” finally crossed the finish line, after Mr. Horwitz died, Ms. Brooks dedicated the book to him, along with a quote from the Patrick Phillips’s poem “Heaven”: “It will be the past and we’ll live there together.”