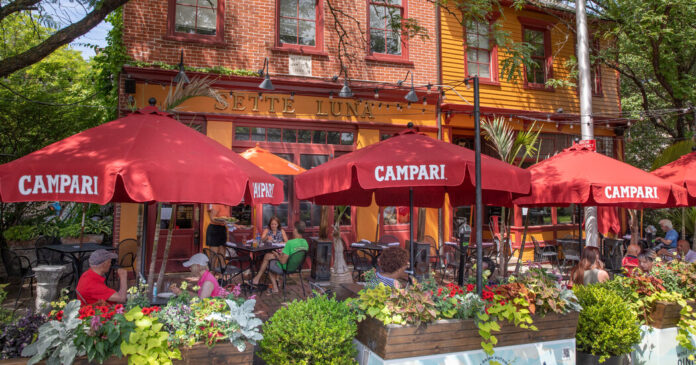 Rachel Zanders probably would never have opened a candle shop in the historic district of Easton, Pa., if her older brother, Steven Zanders, hadn’t moved to the city from Allentown a decade ago while helping to open a diner there.

When Mr. Zanders, now 47, first rented a place in Easton, he thought he had made a mistake. The city, which sits on the Pennsylvania-New Jersey border at the junction of the Delaware and Lehigh Rivers, felt weather-beaten and downtrodden. But he soon discovered that the city of 27,000 in Northampton County was in the midst of a dramatic transformation.

So in December 2014, he paid $90,000 for a two-bedroom, one-and-a-half-bath rowhouse in the West Ward, a working-class neighborhood. When friends asked him why he bought there, he told them that he believed in what people in Easton were doing.

“I feel like Easton is a little Manhattan,” said Mr. Zanders, who refinanced his home last year. “It’s like one of the blocks of Manhattan fell off into Easton.”

The city, about 75 miles west of Manhattan, now has a revitalized downtown, with new shops and restaurants flanking restored historic homes. “There’s a lot of life. You see people you know, and everybody says hi,” said Ms. Zanders, 34. “You can tell they really value the history that’s here.”

A former Brooklyn resident, Ms. Zanders has grown her business, Easton Candle Co., from an online wholesale company to include a brick-and-mortar store. And while she is still renting the spaces in Easton where she lives and works, she is thinking seriously about buying.

For more than a decade, Easton has been a refuge for New York and New Jersey expatriates who want more real estate for their money, along with a lower property tax bill. Elizabeth Slevin and her husband, Gene Ciccone, who moved to Easton from Maplewood, N.J., in 2014, are typical: Both retirees, they discovered that they could buy a four-bedroom house in Easton for about the same price as their three-bedroom house in Maplewood, which meant they would have a guest room for their grandchildren, who lived nearby. And the tax bill was about a third of what they paid in Jersey.

“As I said to my husband, ‘We can sit in the yard and watch the roses grow in Maplewood, or find a less expensive area and use our extra cash for fun things like traveling,’” said Ms. Slevin, a former speech-language pathologist.

So she and Mr. Ciccone, a former Newark public school administrator, paid $388,000 for a 2003 house in Easton’s Old Orchard neighborhood. He can still teach part-time at Montclair State University, and their community-theater friends in Maplewood are only an hour away.

And if they choose to volunteer their time, there are plenty of opportunities. Megan McBride, of the Greater Easton Development Partnership, a nonprofit that oversees a popular public market and farmers’ market, said that newcomers often become volunteers: “They love feeling like they’re part of the action.”

Interstate 78 sweeps south of Easton and winds its way east to New York, a journey that residents say takes about an hour and a half. But the city is also roughly an hour from the Poconos and an hour and a half from Philadelphia and the Jersey Shore.

Easton was founded in 1752, later becoming a city of foundries and a hub for transporting steel, and many of the buildings and bridges are remnants of those days. But by the time Crayola Experience — one of the main catalysts of Easton’s recent turnaround — opened 20 years ago in Centre Square, not far from the company’s headquarters in Forks Township, the city had seen better days. Students from stately Lafayette College, in the College Hill neighborhood, were advised not to venture into the nearby downtown, said Salvatore J. Panto Jr., a Democrat in his fourth consecutive term as Easton’s mayor (he also served as mayor from 1984 to 1992). When Mr. Panto began his second mayoral stint in 2008, he beefed up the city’s police force, he said, and people started to rediscover the city, with its riverside parks, walking trails and historic charm.

At the end of May, there were 84 properties with an Easton mailing address listed for sale, according to data from Greater Lehigh Valley Realtors. That included homes in the city, as well as in the boroughs of Wilson, West Easton and Glendon, and in the townships of Williams, Forks and Palmer. Prices ranged from $110,000 for a two-bedroom, two-bath West Ward rowhouse to $4.5 million for a five-bedroom, three-bath townhouse in the historic district.

Looming over Scott Park, close to where the swift Lehigh River meets the deep Delaware, is a statue of a boxer launching a left jab. The figure represented is Larry Holmes, known as the Easton Assassin, who grew up in the city and held the World Boxing Council heavyweight title from 1978 to 1983.

Easton, it seems, is reluctant to shrug off its days as a brawny river town. The grit adds to its aura. But the historic district is a big draw, too. Today, it has become so exclusive that potential buyers are willing to consider homes in the West Ward and South Side neighborhoods. One of Mr. Panto’s challenges as mayor, he said, is to ensure that longtime residents of those areas aren’t pushed out. Creating more affordable housing is another challenge.

Old-timers sometimes complain that Easton is not what it used to be, Mr. Panto said, but he believes that newcomers have made the city stronger. Those recent transplants are often referred to as “front-platers,” said Jonathan A. Miller, an agent with RE/MAX Real Estate based in Bethlehem, because New York and New Jersey drivers need license plates on the front of their cars, and Pennsylvania drivers don’t.

“But we have stuff here now,” said Mr. Miller, acknowledging that the city has grown. “Now you don’t have to drive to New York or Philly anymore.”

The Easton Area School District, which serves students in the city of Easton and all or part of three surrounding townships, includes seven elementary schools, a cyber academy, a middle school and a high school. As of August 2021, 44.2 percent of the district’s 8,300 students identified as white, 17 percent as Black or African-American, 28.1 percent as Hispanic or Latino, 5.4 percent as Asian and 5.1 percent as two or more races.

According to the state’s Department of Education, Easton-area students taking the SATs in 2019 averaged 512 in math and 537 in reading and writing, compared with state averages of 537 and 545.

Trans-Bridge Lines offers daily bus service from the Intermodal Transit Center in downtown Easton to the Port Authority Bus Terminal in New York. With one exception, Easton is the next-to-last stop en route to New York and the second stop on the way back.

Every Thanksgiving, Fisher Stadium at Lafayette College plays host to one of the fiercest high school football rivalries in the nation: the Easton Red Rovers versus the Phillipsburg Stateliners. The series dates to 1905, has drawn sellout crowds of more than 20,000 and has been broadcast several times on national television. In 2021, the Red Rovers scored a last-minute touchdown to win the game.