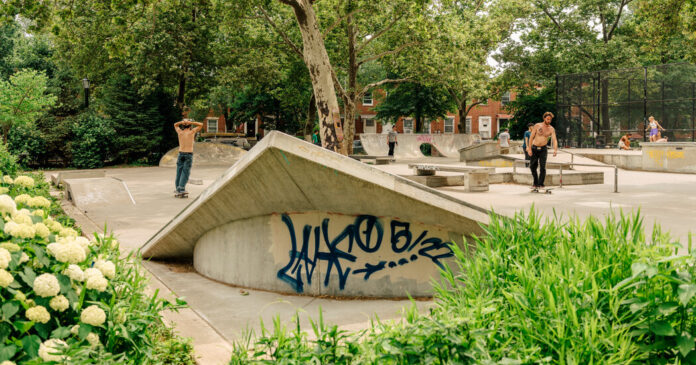 In the East Williamsburg neighborhood of Brooklyn, residential blocks feel like an afterthought. Townhouses fill the spaces between industrial corridors. Parks are steps from scrapyards, where musclebound men with sledgehammers pulverize appliances. You can easily find a place to get your freight truck washed.

This is heaven to Laura Alfstad, who moved into a new condo building on North Henry Street with her husband, Thomas, in September 2020.

A nurse practitioner, Ms. Alfstad, 35, had been living on the Pacific Island of Guam and met Mr. Alfstad in South Korea. After they married, they relocated to his apartment on East 34th Street in Manhattan. Ms. Alfstad, unsettled by the “high energy and tall buildings,” couldn’t wait to leave.

East Williamsburg felt like a sanctuary. Their home, which cost slightly less than $1.4 million, has 1,200 square feet with two real bedrooms and a garden. The walk to McCarren Park, at the border of North Williamsburg and Greenpoint, is 15 minutes. The couple patronize the restaurants, coffee shops and old-timey butchers along Graham Avenue. (“We want to make sure our stamping grounds stay healthy,” Ms. Alfstad said.) Mr. Alfstad, who works at the United Nations, commutes on the L train.

Sure, the Brooklyn-Queens Expressway roars a block and a half away. “I’m originally from Detroit,” Ms. Alfstad said, “and I like the gritty, industrial vibe.”

In New York, neighborhood boundaries are notoriously elastic, and some geographers may insist that the Alfstads really live in Greenpoint. What’s in a name? Northwest Brooklyn has long been a pulsating mass of development, where generations-old Italian, Hispanic and Slavic communities have eroded, and where young people flock and then flee as soon as housing prices become unsustainable.

Currently, East Williamsburg blends into neighborhoods that share its preponderance of asphalt and street art, like Bushwick to the south and Ridgewood, Queens, to the east. Residents consider the nearby cultural and waterfront attractions of North and South Williamsburg, to the west, as bonuses.

The stingiest maps define East Williamsburg as a triangle formed by Flushing Avenue to the south, Bushwick Avenue to the west and Metropolitan Avenue to the north. Google Maps puts the B.Q.E. at the northern boundary and extends the district to the easternmost branch of Newtown Creek. About half of the total area of 1.4 square miles is occupied by the East Williamsburg Industrial Park. Breaking down neighborhood demographics is challenging given the uncertain boundaries, but the region that the website City-Data defines as East Williamsburg — which encompasses 2.5 square miles and five ZIP codes — had a 2019 population of 94,473 residents, 42.3 percent of whom identified as white, 33.8 percent as Hispanic or Latino, 10.7 percent as Black, 6.5 percent as Asian and 3.9 percent as multiracial.

Even by the narrowest of definitions, Roberta’s, the beloved pizzeria on Moore Street that is considered a Bushwick landmark, is technically in East Williamsburg. According to Nick Tukmanian, 39, the owner of a commercial building at 100 Bogart Street that leases co-working space, once Bushwick got hot a decade ago, businesses near the Morgan Avenue L train stop, his own included, were happy to piggyback on the allure.

Last September, East Williamsburg received its own landmark in the form of a 170,000-square-foot Netflix production studio with six sound stages, on the site of a former steel factory on Johnson Avenue.

Those who are nostalgic for 1980s New York will find much to warm their hearts. Loft buildings and factory walls are slathered in graffiti, and parked trucks look like they idled in place a moment too long and were tagged to match the architecture behind them. As in Bushwick, the streets are filled with stylish young people and tourists.

Mr. Tukmanian recalled that someone recently popped into his building to ask the person at the front desk for the time of the next graffiti tour. “I don’t know the schedule,” the attendant replied. “Just go to the left or right.”

For Juan Elias Lopera, a real estate agent with Rhome, in East Williamsburg, the area’s warehouses are happy breeding grounds for galleries, photo shoots and dance parties. Our Wicked Lady, 3 Dollar Bill and Sovereign are popular performance spaces that flaunt their industrial chic.

The neighborhood turns more residential as one heads north toward the 6.4-acre Cooper Park. Created in 1895 on glue factory land owned by Peter Cooper, it has a skateboard park, handball and tennis courts, a pollinator garden and a playground.

Nearby, the block of Devoe Street between Olive and Catherine includes renovated townhouses that are prime residential real estate. St. Nicholas Roman Catholic Church, a red-brick edifice at the corner of Devoe and Olive, dates to 1886, when its congregation was overwhelmingly German. (It is now largely Latino.)

“I just like being around raw space,” said Lauren Ball, 42, an artist who relocated from her home at Bushwick Avenue and Varet Street three months ago but still works out of her studio on Metropolitan, which she leases for substantially less than $1,000 a month. “I think all artists have this affinity for the possibility of space, and for me, that’s what East Williamsburg offered and continues to.”

For three years, Engy Adham, 30, a production assistant at CNN, has shared a three-bedroom apartment on North Henry Street with two roommates; her monthly share is $850 plus utilities. “I’m Egyptian,” she said, “and when I moved to the States, I wanted a place that was diverse.” The mix of races and ages “appeals to me,” she said.

East Williamsburg attracts young creatives because of its relative affordability, but prices are soaring there, as in much of Brooklyn. The reason, said Mr. Lopera, the real estate agent, is an influx of remote workers and a shortage of available properties. According to Redfin, the median sale price of an East Williamsburg home in May 2020 was $1.15 million, a year-over-year increase of 8 percent, based on 32 sales. (In Redfin’s map of the neighborhood, the western boundary stretches past Union Avenue to the B.Q.E.)

In terms of rentals, one-bedrooms are currently priced at about $2,600 to $2,800 a month on the low end, Mr. Lopera said, and two-bedrooms typically go for about $3,300 to $3,400 a month. But he expects more inventory to come, he said, based on the growing visibility of construction sites and work permits.

Some of it has already arrived. A new seven-story building at 222 Johnson Avenue, just west of Bushwick Avenue, is described by the developer, Slate Property Group, as East Williamsburg’s first luxury building. It offers 116 rental units, 35 of them allotted to families with annual incomes of $31,680 to $159,640, depending on household and unit size. Market-rate rentals start at about $2,850 a month for a studio and top out at more than $4,600 a month for a two-bedroom, two-bath unit. As of late June, the building was fully occupied. Martin Nussbaum, a principal of Slate Property Group, said his company will soon break ground on a 180,000-square-foot tower at 159 Boerum Street.

For now, at least, graffiti is East Williamsburg’s brand — and subject to its own kind of gentrification. Amid the spontaneous eruptions of brains, fangs and smiley faces — of moons, toons and raccoons — are polished, corporate-sponsored artworks like the geometric mural transforming the facade of 154 Morgan Avenue, a manufacturing building.

P.S. 196, the Ten Eyck elementary school, enrolls about 290 students in prekindergarten through fifth grade. In 2020-21, the student body was about 75 percent Hispanic or Latino, 18 percent Black, 2 percent Asian and 1 percent white. The pass rate by the school’s former fifth graders in their sixth-grade classes in core subjects (math, English, social studies and science) was 96 percent.

P.S. 147, Isaac Remsen, the Brooklyn School for Environmental Engineering, enrolls about 300 students in prekindergarten through fifth grade. In 2020-21, the student body was 52 percent Hispanic or Latino, 15 percent Black, 13 percent white and 9 percent Asian. The pass rate by this school’s former fifth graders in their sixth-grade classes in core subjects was 93 percent.

M.S. 582, the Magnet School for Multimedia, Technology and Urban Planning, enrolls about 350 students in sixth through eighth grades. In the 2020-21 school year, the pass rate of students in core courses was 98 percent.

East Williamsburg Scholars Academy, a high school, enrolls about 330 students in ninth through 12th grades. In the 2020-21 school year, the student body was 64.8 percent Hispanic or Latino, 29 percent Black, 2.4 percent white and 1.5 percent Asian; 26 percent enrolled in at least one Advanced Placement class. Among the class of 2021, 78 percent graduated within four years.

Williamsburg Charter High School enrolls about 980 students in ninth through 12th grades. In 2020-21, the student body was 61 percent Hispanic or Latino, 35 percent Black and 1 percent white; 84 percent completed approved college or career preparatory courses and exams. Among the class of 2021, 83 percent graduated within four years.

East Williamsburg is served by the L train’s Graham Avenue, Grand Street and Morgan Avenue stations, and on the western fringe, by the Metropolitan Avenue/Lorimer Street stop on the G and L trains.

According to a 2012 article in “Brooklyn Based,” an online publication, the name East Williamsburg is and is not an invention of an opportunistic real estate industry. The community wasn’t even in Brooklyn originally: “The earliest mention of the neighborhood, then part of the Dutch Newtown settlement, is found on maps dating from 1783 in the western chunk of what is now Ridgewood, Queens.”

In 1982, developers of the East Williamsburg Industrial Park picked the name to clarify its location relative to North and South Williamsburg. It wasn’t until the 1990s that the label took purchase and the neighborhood’s boundaries expanded.

What $three Million Buys You in New York California and Wyoming