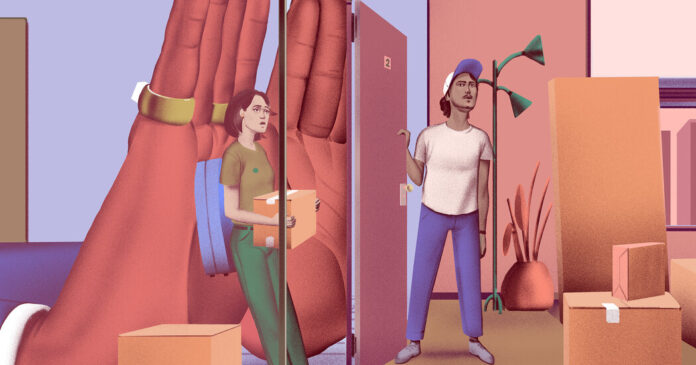 Xin-rui Lee didn’t initially want to live with her partner.

They’d been together for a year and eight months, but after a seven-week trial run of living together on a recent trip to Mexico City, Ms. Lee recalled leaving with a strong feeling that she did not want to make the situation permanent.

“Ultimately, I felt that I was not comfortable enough living with a partner to truly be my dumbest self at times,” Ms. Lee, a 26-year-old communications specialist, said. “I took an edible one night because I was tired from work, but the whole time, he was there, and I just didn’t want to be perceived at all. I was so self-conscious.”

Her desire to live alone slowly shifted as the realities of the current rental market set in. Her landlord announced that her current rent would be going up by $300, and after a quick scan of what was available online, Ms. Lee thought moving in with her partner might be the right choice after all. So the two began their apartment hunt together in hopes of finding a new place by the end of the summer.

As rents across the United States have soared in recent months, many couples are moving in together sooner than anticipated in order to afford apartments, build stronger rental applications or live in their ideal neighborhoods. With pandemic restrictions easing and people coming back to cities, the rental market hasn’t kept up with the demand. In May, the median rent in Manhattan reached a record-breaking level of $4,000, the brokerage Douglas Elliman reported. Nationwide, asking rents were up 15 percent in May from a year earlier, according to the real estate brokerage Redfin.

“We’ve had clients who have been dating under six months move in together to share the burden of high rent prices in desirable neighborhoods,” said Tony Mattar, an agent and the founder of the Compass brokerage’s Chicago Crib team.

Keyan Sanai, an agent at Douglas Elliman in New York, said that he’s seen more couples move in together now than ever before. “$2,500 in the West Village doesn’t even get you a decent studio. But you can get a great two-bedroom between $5,000 and $5,500, so for around $2,600 a person, you get a nice spacious apartment with your partner,” Mr. Sanai said. “It just makes more sense, and couples are seeing that.”

Many couples are now excited to take the next step in their relationships, but there are also newfound fears and worries that come with being financially and locationally tied to a significant other earlier than expected.

While Ms. Lee is nervous about some aspects of living with her partner, she’s looking forward to being able to pool resources to build a nicer home.

“I want to have a cute, cozy place, and together that might be possible. Our rug game will be strong. Our art game will be strong,” Ms. Lee said. “I do worry about giving ourselves space to miss each other, but I’m also confident that we will be able to find a rhythm that works for us.”

“It makes me a little bit anxious or fearful that it’ll negatively impact our relationship, but it could also just be wonderful,” Ms. Lee said.

That anxiety might be well founded. Arielle Kuperberg, an associate professor of sociology and gender studies at the University of North Carolina at Greensboro, said, “Once you move in with someone, it becomes much harder to break up with them. You’d have to find a new apartment, you might have to break a lease or even awkwardly stay in the same place with your ex.” These added barriers to breaking up mean that certain qualities or disagreements that might’ve ended the relationship previously become things that the couple will have to tolerate or work through, Ms. Kuperberg said.

If you’re living with your significant other, “you’re probably sharing a bed with that person. Where’s the escape hatch?” said Sharon Sassler, a co-author of “Cohabitation Nation” and a sociology professor at Cornell University’s Brooks School of Public Policy.

Even for couples already planning to move in together, the market has upset plans. Jennifer Gamarra, 25, and Michael Kaplan, 26, had been dating for two years and were planning to move into a new apartment together when their leases were up this July. They wanted to live on the Upper West Side of Manhattan in a two-bedroom with amenities, possibly a gym and bike storage, so they set up notifications on StreetEasy and started their search.

“I was hoping that combining our budgets would allow us to upscale a bit,” Mr. Kaplan, a software engineer, said. But they quickly found out that it wouldn’t. “A lot of other places, even the ones more than $5,000 that we looked at, they didn’t have a nice living room area, and there was no good spot to work from home,” Mr. Kaplan said.

The couple decided that Ms. Gamarra would simply move in to Mr. Kaplan’s one-bedroom apartment, where the rent went up to $3,000 from $2,200.

Though the two are happy to share a home as they had hoped to, there are some new concerns that come with moving into Mr. Kaplan’s apartment instead of finding a new apartment together.

“We wanted to move into a new place to make it our own, but I’m now moving into his apartment, which feels like I’m going to be living in his place, not our place,” Ms. Gamarra, a Ph.D. student, said. “Trying to make the apartment feel like our first home together is going to be more difficult for me.”

The issues that come with moving in together too soon are also exacerbated for people of lower socioeconomic status. “Those with less than a college degree are far more likely to live with a partner — and less likely to marry them — than the college educated, and they are even more challenged by high apartment costs,” Ms. Sassler said. “Rent costs have a far more pernicious effect on the less educated — especially when it comes to relationship progression and stability.”

The New York Times interviewed one couple who decided to no longer participate in this story, after they realized that they disagreed over why they moved in together in the first place. Both partners worked food service jobs. While one said that high rent was a driver for moving in together, the other said they believed it was the next step in their relationship.

“Not agreeing is not the best recipe for relationship success or satisfaction. If in a year, the partner who viewed it as the right step wants to get engaged, and the other partner does not, what ensues?” Ms. Sassler said.

But if the relationship is strong, moving in together might be a great decision, Ms. Sassler added. “You can wake up together, see if they make you breakfast in bed or bring you coffee. Roommates tend not to do that,” she said.

That added romantic closeness is exactly what Kenneth Yeung, a 23-year-old product manager living in Brooklyn, was hoping for.

Mr. Yeung and his boyfriend had been dating for less than a year, but the couple wanted to stay in their neighborhood of Williamsburg, where the average rent for a one-bedroom went up about 25 percent in the past year. Mr. Yeung won the affordable housing lottery, and the two were planning to split a one-bedroom apartment for $2,700 a month starting in July. They dreamed of purchasing a Noguchi coffee table and designing a home of their own.

“We would have liked to have the flexibility to at least wait until the one-year benchmark in our relationship,” Mr. Yeung said. “But with this rental market and just how much we wanted to stay in this neighborhood, we thought it makes so much more sense to live together.”

But since his initial interview with The New York Times, Mr. Yeung and his partner decided to end things.

“That pressure of that firm date of moving in together really made us re-evaluate whether this is a good thing right now,” Mr. Yeung said. “It put a lot of stress on us to make things work.”

Now, Mr. Yeung will move into the one-bedroom on his own, and without someone to share the rent with, he’s planning to budget his income meticulously. “Less takeout, maybe eating out just one day a week and no coffee ordering,” he said. “I’m going to try and cut out all those everyday luxuries just to make that rent.” He’s also kissing that Noguchi coffee table goodbye.

And maybe not living with a romantic partner will be for the best anyway. “With the city finally opening up, it felt like I had so much life to live. I worried if I lived with my partner, I’d be losing some of that newfound freedom,” Mr. Yeung said. “I think it made us have to commit to one another in a really fast way.”