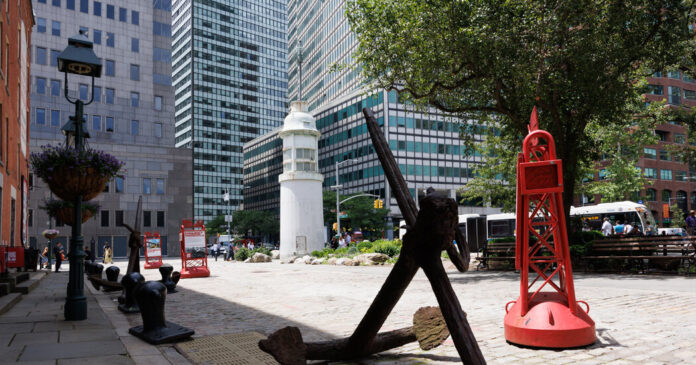 On a landlocked street corner at the entrance to the South Street Seaport stands a shabby, rust-streaked old lighthouse, its lantern dark, dwarfed by modern towers to its south and west. Passed with scarcely a glance by most people heading to the shops and bars on Fulton Street, this is the 109-year-old Titanic Memorial Lighthouse, which once presided over the East River waterfront from a far prouder height, shining its fixed green beacon miles out to Sandy Hook, at the southern entrance of Lower New York Bay.

A fledgling preservation group, which includes descendants of Titanic passengers, has been urging the restoration of the lighthouse for more than two and a half years, while the South Street Seaport Museum, which owns the structure, has been focused on the more immediate, existential struggle of simply staying solvent.

After decades of financial hardship, the museum may finally be on the verge of long-term stability as a result of $40 million to be provided for the museum’s benefit as part of the Howard Hughes Corporation’s development plan for 250 Water Street, a big parking lot one block north of the lighthouse.

Hughes, which controls much of the South Street Seaport Historic District, paid nearly $183 million in 2018 to buy the parking lot, which sits within the district at its western edge. The corporation has received key approvals from the city to erect a 324-foot-tall, mixed-use luxury tower on the site, but the project is being challenged in court by a local advocacy group.

On April 15, 1913, a year to the day after some 1,500 souls were lost following Titanic’s collision with an iceberg, the Titanic Memorial Lighthouse Tower was dedicated with great ceremony and sorrow. Designed by Warren & Wetmore, the architects of Grand Central Terminal, the lighthouse stood on the roof of the 12-story, Flemish-style Seamen’s Church Institute, on the waterfront at 25 South Street.

It was raining, reported The Lookout, the institute’s magazine, “and the Tower rose out of the mist impressive, dignified, a little detached from New York and the surrounding skyscrapers which form its background.”

Nearly 300 people assembled in the institute’s auditorium, which was decorated with British and American flags at half-staff. One speaker declared that Titanic’s failure to arrive in New York, its destination port, had caused “the heart of the City” to be “shocked and grieved as it has seldom been.”

Atop the lighthouse was a “time ball” that dropped down a mast at noon on weekdays at a telegraph signal from the U.S. Naval Observatory in Washington. The time ball allowed captains to set their chronometers before leaving port. They could then find their longitude at sea later by calculating the difference between a ship’s local time, determined by the position of the sun and stars, and the local time in New York City shown on their chronometers.

For 55 years, the memorial’s distinctive green light shone out on the harbor, helping guide ships into port. But in 1968, the Seamen’s Church Institute moved to new quarters, and the lighthouse was donated to the South Street Seaport Museum by the Kaiser-Nelson Steel & Salvage Corporation. The lighthouse sat on Pier 16 until 1976, when it was moved with a bicentennial donation from the Exxon Corporation to its current location at Fulton and Pearl Streets.

In sharp contrast to the high-profile 1913 dedication, the event on April 15 at the lighthouse this year, the 110th anniversary of Titanic’s sinking, was a humble affair.

“There will probably be more speakers than audience,” said Adrian Saker, president of Friends of Titanic Lighthouse Restoration, as he hung a wreath on the memorial’s pockmarked concrete base. “But when this is restored to its original historic status with its time ball and beacon, they will come in droves.”

In the end, just 17 people gathered to hear four speakers, many of whose words were carried off by the wind or lost amid the rumble of traffic.

“For those who don’t have a grave,” she said, laying a rose wreath beneath the lighthouse, “let this be their grave.”

The Friends have towering goals, including an in situ restoration of the lighthouse to its original working condition at a cost of more than $500,000. Ultimately, Mr. Saker, a marketer and fund-raiser who was born to British parents and is now a United States citizen, hopes to hold an international design competition for a vertical Titanic museum on Pier 16, with the restored lighthouse at its apex.

Belfast, Liverpool and Southampton have museums dedicated to telling the story of Titanic, he said. “The question is: Why doesn’t New York?”

Mr. Saker first approached the South Street Seaport Museum about restoring the lighthouse in 2017. After being told twice by Capt. Jonathan Boulware, the museum’s president and chief executive, that the museum lacked staff and funding to take the project on, Mr. Saker formed his independent Friends group in 2019. He drew support from descendants of Titanic passengers like Helen Benziger, a great-granddaughter of Margaret Brown, a Titanic survivor who led fund-raising for destitute survivors and became celebrated as the Unsinkable Molly Brown.

“It was erected to honor those who’d perished,” Ms. Benziger said of the lighthouse, “and it’s like their graves have not been tended.”

Long on vision, the Friends remain notably short on funds. Despite collecting 21,600 signatures and support from elected officials for having the lighthouse listed on the National Register of Historic Places, the group has largely failed to translate that goodwill into cash. Corporate sponsors have spurned the group’s overtures, and as of late June, a GoFundMe campaign begun in January 2021 had raised just $5,106.

Nor has the Seaport Museum shown any eagerness to follow Mr. Saker’s lead.

“The Titanic lighthouse as a practical matter is an accessioned object in the museum’s collection, which puts us in the position of legal responsibility for caring for the artifact and indeed its restoration,” said Captain Boulware. He added: “The Louvre doesn’t farm out the responsibility of restoring the Mona Lisa to a private group.”

When the Friends prepared paperwork in 2020 asking New York State to include the lighthouse in the State and National Registers of Historic Places Program, the museum did not sign the proposal, stymying the effort.

Captain Boulware said that the museum is open to pursuing a National Register listing, provided that the effort is led by the museum, “but we have been very focused on making sure the museum can survive.”

After the Friends’ fund-raising tally nosed past $5,000 in May, Mr. Saker said that he planned to hire a historic preservation architect who had agreed to prepare a historic structure report — the first step in a potential restoration — for that sum. The effort received a boost in June when the Victorian Society New York awarded the Friends a $500 grant toward the creation of a restoration assessment.

“The Museum is grateful for the fund-raising efforts of the Friends of the Titanic Lighthouse, and we share their objective to restore and elevate the lighthouse as it deserves to be,” Captain Boulware said in an email. But he cautioned that “responsible care of the artifact requires proper process, including a Request for Proposals for the best-qualified adviser to provide the report; we must be able to point to a robust process that led to the hiring.”

He said in an interview that such an effort typically costs more than $25,000, and “a budget historic structure report does not, I think, add value to this effort.”

The Hughes Corporation, which controls much of the South Street Seaport Historic District through long-term leases with the city as well as some direct ownership, echoed the museum’s position on who should lead any restoration campaign.

“As longtime steward of the South Street Seaport Historic District, the South Street Seaport Museum preserved the Titanic Memorial Lighthouse from destruction and is the appropriate entity to oversee its restoration as part of a broader plan to revitalize its historic properties and artifacts,” Saul Scherl, the corporation’s president for the New York Tri-State Region, said in a statement.

Hughes plans to make $1 million in improvements to tiny Titanic Memorial Park, on which the monument stands, including new trees and seating, but no work on the lighthouse.

Up the street, the developer’s proposed 250 Water Street tower has received approvals from the City Planning Commission and the City Council as well as design approval from the landmarks commission. But in February the Seaport Coalition, a local advocacy group, filed a lawsuit against multiple city agencies in New York State Supreme Court seeking to annul and vacate land use and zoning approvals for Hughes’s proposed tower.

If the Coalition is unsuccessful, $40 million that Hughes paid the city for development rights to build its tower will be placed in a fund that the museum can use as an endowment. The city is also providing $10 million for the museum’s capital projects.

“For the past eight years, the museum has been hanging on by its fingertips,” Captain Boulware said, “and now we find ourselves in a position to plan to grow and attend to things we need to attend to, and that includes the lighthouse” — a “powerful artifact” in need of a “thorough and reverential restoration.”

The museum’s immediate priority, however, is the reopening of museum spaces to make its collection available to the public.

Captain Boulware said he had no timeline for any lighthouse restoration, “but if a $25,000 or $5 million check arrives this week, we will start this week.”