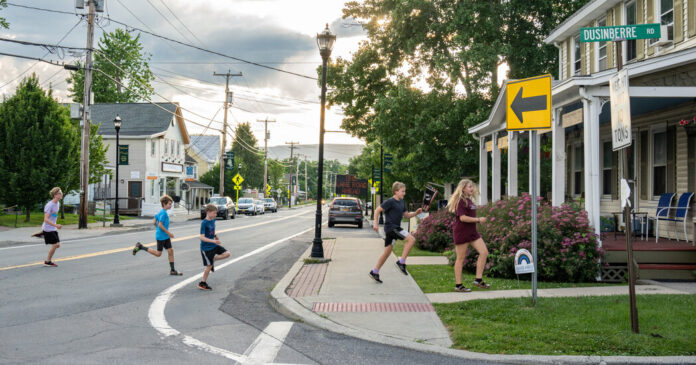 When Laura Phillips was planning her retirement after 30 years of teaching art to elementary school students and living in Seaford, N.Y., on Long Island, she and her husband started looking for a more tranquil place to live.

“We wanted to move someplace less populated with less traffic,” Ms. Phillips, 58, said. “Every year, for 20-something years, we’ve gone up to Mohonk Mountain House for a weekend, and it came to me that we’re the most relaxed and the most content when we’re in those mountains.”

Now Ms. Phillips and her husband, Chris Capone, also 58, can gaze out on the Shawangunk Mountains — known locally as the Gunks — from their home in Gardiner, N.Y. They closed on the 2,600-square-foot colonial-style house on five wooded acres in August 2020, paying $490,000. “In the winter, I have a view of the ridge from my kitchen window,” Ms. Phillips said.

That view of the 50-mile Shawangunk Ridge, the rock-climbing mecca that stretches from the New Jersey border to Kingston, N.Y., is among the reasons New Yorkers are flocking to Gardiner, which is also prized for its wide-open spaces. Although the actor Robert De Niro’s 98-acre Gardiner compound is an extreme example, the town is known for expensive homes surrounded by acres of farmland.

“There are big properties that haven’t yet been subdivided into smaller developments,” said Steven Asher Cohen, an associate broker with Berkshire Hathaway HomeServices who recently represented a New York City client on the purchase of a modern farmhouse on 34.5 acres for $1.625 million. “The village is small, but it’s only about six miles to New Paltz. People like the easy access to the Thruway and a little bit of a shorter drive to the city.”

Access to the Gunks and stretches of undeveloped land draw outdoorsy people like Deyano Manco, a New Paltz native, who moved to Gardiner in 2014. “I wanted to be where there was more open space,” said Mr. Manco, 49, a founder of the nonprofit Shawangunk Biking Association. “Gardiner was a natural fit for me, being a cyclist. It offers much more direct access to where I want to go.”

In June, Mr. Manco started BaseCamp, a “community hub” on 7.5 acres with a 2,000-square-foot building, a beer garden, firepits and a long table that “encourages you to sit together.” BaseCamp sells outdoor gear, supplies and maps; light food like wraps and salads; and wine and craft beer — all served outdoors.

It was the pull of the outdoors that inspired Jannette Wing Pazer, a founding member of the nonprofit Gunks Climbers’ Coalition, to move to Gardiner from Millburn, N.J. In 2010, she and her first husband paid $395,000 in cash for a three-bedroom home on 5.5 acres. Ms. Pazer now lives there with her second husband, Matt Logan.

“In early 2010, both my sister and mother died,” said Ms. Pazer, 59, a search engine optimization specialist for the Culinary Institute of America, in Hyde Park, N.Y. “After climbing in the Gunks since I was in college, and always wanting to live there full-time, we decided life was too short to put off living where we wanted to be.”

For Ms. Pazer, Gardiner is all about the Gunks. “I’m so focused on the recreation,” she said. “It’s nice to live in a place where you can hike, cross-country ski and climb — all these things are right here.”

The architecture in Gardiner is “a smattering of everything,” Mr. Cohen said. “There are older farmhouses, modern farmhouses, contemporary-style homes, and you have a lot of colonial houses built in the ’80s.”

What many Gardiner properties have in common is ample land. Stretches of woodland, wetland, farmland, pasture and apple orchards abound. In 2008, the town expanded minimum lot sizes to five acres in its Rural Agricultural District, which comprises about 27 square miles of the 44-square-mile town. In the Shawangunk Ridge Protection District, properties are now required to have a minimum of five to 20 acres, with higher acreages attached to lots with higher elevations.

The idyllic setting makes this town of about 5,600 residents an optimal spot for vineyards and wineries. One of the newest is Bruynswick Winery, opened last fall by Ryan and Johanna Kiernan on Kiernan Farm, owned by Mr. Kiernan’s father, Marty Kiernan. Other offerings include Tuthilltown Spirits, Gardiner’s 19-year-old distillery, which has a cocktail bar and guided tastings, and Yard Owl Brewery, with its own line of Belgian-inspired ales.

Among the outdoor recreation opportunities are the 26.2-acre George Majestic Memorial Park, with multiple sports facilities and a playground; Skydive the Ranch, which attracts sky-diving enthusiasts from around the tristate area; and the 87-acre Gardiner Park, where a new network of trails is being created near the Wallkill River.

Less popular recent projects include Yogi Bear’s Jellystone Park Camp-Resort, a 100-acre campground and small water park opened in 2014 by the Wallkill River, running south to north through the center of town. The camp’s cabins, RVs and tents, which can accommodate up to 2,000 visitors, are usually fully booked throughout the summer, leading to complaints about noise and other quality-of-life concerns.

Town residents have also raised concerns about Wildflower Farms, a luxury resort scheduled to open Sept. 30, with 65 high-end cabins and cottages on 140 acres and a main house with a restaurant and spa. Some worry that wildlife along the Shawangunk Kill, a stream that flows through the area, will be threatened by the development.

Gardiner is reserved and upscale — a good choice for a reclusive celebrity, although Mr. De Niro’s fight with the town over his tax bill did little to lower his profile there.

The compact commercial district has only a few businesses, but each has a distinct character. Gardiner Liquid Mercantile serves craft cocktails and housemade apple brandy in a hip atmosphere. Julian’s Provisions offers sophisticated lunch options like shrimp salad on toasted brioche, and the brunch spot Cafe Mio is known for its fresh local ingredients.

The town has an active community of artists who hold an annual Open Studio Tour of some 20 artists’ studios. Ms. Phillips, the retiree who relocated from Long Island, is also an artist and plans to participate in the tour next year. She was thrilled to meet several artists living on her road, she said: “I met them just by walking the neighborhood.”

The current enrollment in the New Paltz school district is 1,871 students, 252 of whom live in Gardiner, said Cheri Pettus, the district’s database administrator. In 2020-21, according to the New York State Department of Education, 75 percent of the district’s students identified as white, 13 percent as Latino, 5 percent as multiracial, 4 percent as Black and 3 percent as Asian or Pacific Islander.

The Wallkill Central School District, which serves 2,766 students, has 145 from Gardiner, said Brian Devincenzi, the assistant superintendent for support services. In 2020-21, according to the New York State Department of Education, 64 percent of those students identified as white, 26 percent as Latino, 6 percent as Black, 3 percent as multiracial and 1 percent as Asian or Pacific Islander.

The Metro-North station in Beacon is about a half-hour drive southeast from Gardiner. The trip from there to Grand Central Terminal in Manhattan takes a little over an hour and a half, and a round-trip ticket during peak hours costs $46.

The first Europeans who arrived in Gardiner, around the 1680s, included Huguenots from France as well as Dutch and Irish settlers, said A.J. Schenkman, the town historian.

The New York State Legislature created Gardiner from parts of New Paltz, Rochester and Shawangunk in 1853, naming it after Addison Gardiner, lieutenant governor of New York from 1845 to 1847. The town soon became known for its dairy farms and millstones formed from the mountains’ quartz-rich rocks.

Landmark Property with Over 20 Years in The Making Provides 121...

A Lesson in Brooklyn House Costs