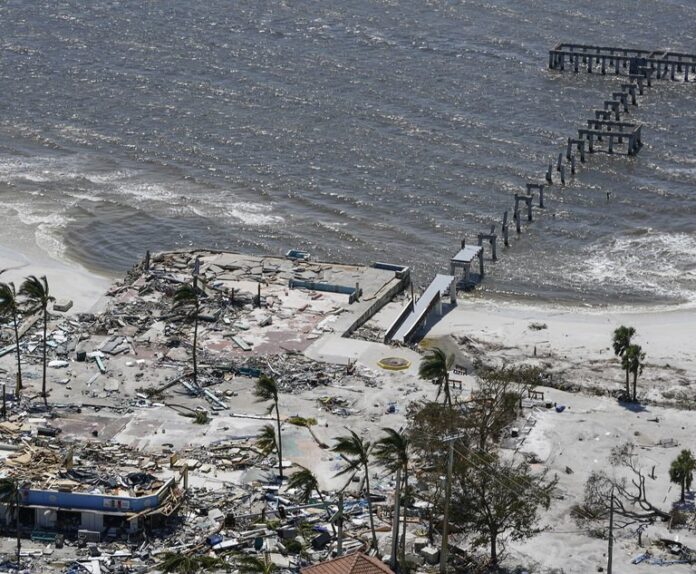 Walt Disney World and other tourist attractions in central Florida appeared to have avoided severe damage from Hurricane Ian. But many businesses on the state’s southwestern coast were hammered and face a long rebuilding process.

In Fort Myers, video posted on social media showed the Times Square, a colorful area of shops and restaurants, leveled by the storm. Sanibel, a barrier island dotted with resorts and connected to Fort Myers by a causeway, was devastated.

Carol Dover, president of the Florida Restaurant & Lodging Association, paused in the middle of an interview to watch live television, and was relieved to see the Westin Cape Coral Resort along the marina in Fort Myers still standing.

“But now everything that they are showing on CNN is flattened. I don’t see anything but rubble,” she gasped. “We have a lot of rebuilding to do, and it’s not done in a month. This sometimes takes years.”

Ian came ashore in southwest Florida as a Category 4 hurricane accompanied by storm surges that left thousands trapped by flooding and millions without power. As it moved inland and weakened — eventually to a tropical storm — high winds and heavy rain continued. But theme parks and other tourism magnets in central Florida appeared to have dodged crippling harm.

In the Orlando area, Walt Disney World and other attractions that had closed ahead of the storm remained shuttered, and it was unclear when they would reopen.

Disney posted a message on Twitter, promising to help its employees and the community “get through this together.”

“As we keep safety in mind, our theme parks and other operating areas remain closed (Thursday) while crews assess the impact of the storm and clear debris,” Disney said.

Damage assessments had barely begun on Thursday, as the storm moved toward the Carolinas — taking a parting shot at St. Augustine and the Space Coast before leaving Florida.

President Joe Biden declared the state a disaster area, clearing the way for federal aid to people in numerous counties. The aid can include grants and low-interest loans to help residents and business owners hit by the disaster.

The storm disrupted air travel to Florida, but only briefly. Some airports that closed were beginning to reopen, and two of the biggest, in Orlando and Tampa, planned to resume flights on Friday morning, according to federal officials.

Florida’s leisure and hospitality sector accounts for nearly 1.3 million jobs, a 9.6% increase from a year ago, according to figures from the Florida Department of Economic Opportunity. Most of those jobs are in lodging and food services, and they have helped cut Florida’s unemployment rate to 2.7% in August — a full percentage point lower than the national average — from 4.3% a year earlier.

Previous strong hurricanes have caused a temporary spike in unemployment in leisure and hospitality businesses and some real estate fields such as property management, followed by a surge in hiring by construction crews during the rebuilding phase, said Sean Snaith, director of the economic forecasting institute at the University of Central Florida.

Snaith agreed that southwest Florida faces a long process of repair and rebuilding.

“As far as tourism, unfortunately they were rolling into their high season — the fall and winter months up north — so the timing is extra unfortunate,” he said. “But the beaches are still there, the theme parks are there, the weather is still nice outside of the hurricane. Tourists will come back.”

Copyright 2022 AP. All rights reserved. This material may not be published, broadcast, rewritten, or redistributed.

Cannot Pay Hire Throughout COVID-19? This is Tips on how to...