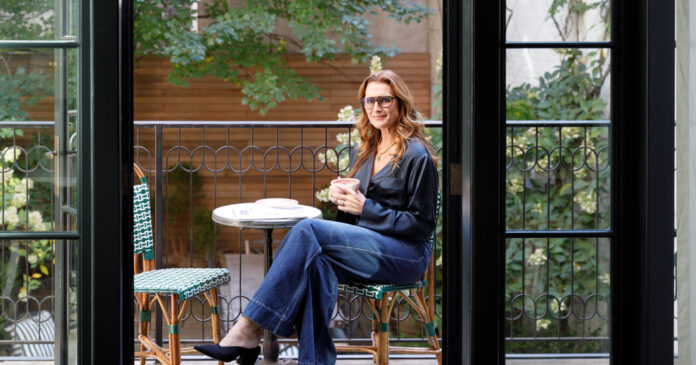 Around the time Brooke Shields celebrated her 16th birthday, she and her mother/manager, Teri, bought a townhouse on the Upper East Side.

“It was quiet, and it was luxurious, in that we had space in New York. We had a backyard. It was such a privileged and safe way to grow up in the middle of Manhattan,” said Ms. Shields, 57, who, since her days as a child model, actor and professional Calvin Klein jeans enthusiast, has starred in television series and Broadway musicals, written books, designed jewelry, founded the digital platform Beginning is Now and appeared in a number of movies. (Her latest, “Holiday Harmony,” will be released this week on HBO Max.)

But circumstances and bank balances change, and as the years went by, “I needed to simplify my assets, so to speak,” Ms. Shields said.

“As I got older, I wasn’t working as much and had some decisions to make. I ended up getting married, and my husband just hated New York,” she continued, referring to Andre Agassi, the tennis star. “He talked me into selling the house, and the day I had to give it up was so sad, because of all the Thanksgivings in that house and all the memories.”

Endless love: “All the things I loved about living in the townhouse on the Upper East Side are what my family has experienced here. We have all these traditions that my daughters really hook into and that are a source of comfort to them.”

But eventually, the loft started to feel like a tight squeeze, and the search was on for a brownstone.

“This had been a dream for me because I wanted my kids to have what I had had with my house on the Upper East Side: to have a feeling of neighborhood, and to have the space which is so hard to come by and so expensive in New York,” Ms. Shields said. “We looked everywhere, but one place was more depressing than the next.”

Finally, a real estate agent directed Ms. Shields’s attention to an early 20th-century Greek Revival building in the West Village that had been converted from a single-family home into an eight-unit apartment house.

She was immediately smitten. “It had been broken up and was really destroyed, but it was as if I could see the whole thing in the future,” she said. “I called my husband, who was in L.A. — this was before you could do full videos on your phone — and I said, ‘I know you’re not here to see it, but I just have this crazy feeling.’”

They bought it, closing on the deal in early 2008, and hired MADE, a Brooklyn-based design/build firm, to do a gut renovation. The couple’s brief for the house was simple: Put it back the way it was. To the extent possible, they wanted to take out what was there, restore it and set it back in place.

“We tried to keep as much of the floors and the stairs as we could,” Ms. Shields said. “The coffin corner was huge for me, because it was original to the house.”

Everything, it seemed, was a candidate for rehabilitation. When the basement was dug out, several massive rocks were excavated, “and we put them in the backyard as stools,” Ms. Shields said. The coal bunker was saved and repurposed to hold a wine closet from an old ship — Ms. Shields’s 10th anniversary present to Mr. Henchy. In some instances, things were salvaged from elsewhere: The stone fireplace mantel in the living room was rescued from the Plaza Hotel when it was renovated in 2008.

Ms. Shields wanted the décor to evoke a London townhouse. For help, she and Mr. Henchy turned to their friend David Flint Wood, a British designer. He nudged them toward a mix of furnishings, materials and periods: hand-blocked Zuber wallpaper, Asian porcelain, neo-Classical Italian tables. Jute and Lucite are also represented.

The collaboration yielded spaces that are chic but warm, that mix the elegant with the whimsical. In the living room, Louis XVI-style armchairs and a French Empire commode coexist with small framed pictures of rabbits, portraits of Ms. Shields’s daughters wearing candy crowns and a heart painting by Keith Haring, a gift from the artist.

“I’m not into being austere or serious,” Ms. Shields said.

And she is most definitely not into fetishizing her possessions. “I grew up saving things, and then by the time I wanted to wear something, it was either out of style or didn’t fit,” Ms. Shields said. “So now my attitude is, ‘What am I waiting for?’”

The crystal stemware on open shelves in a corner of the kitchen? She drinks from it. The decanter she successfully bid on during an auction at Chatsworth House, one of England’s stateliest homes? She pours whiskey from it (admittedly, good whiskey).

She pulled open a utensil drawer and yanked out a handful of sterling silverware gathered from diverse sources. “I love the fact,” she said, “that I can sit down and use something that was in someone’s house forever.”

Because Ms. Shields grew up amid unpacked boxes — “My mother never finished moving in anywhere” — she was originally intent, she said, “on having this house completely done.”

But she has backed off from such finality. “I get new things, and I find new things,” she said. Right now, she is noodling with the arrangement of the barware in the living room — it includes a sterling silver cup that her grandfather, Frank Shields, an amateur tennis star of the 1920s and 30s, won at a tournament. And taking into account the recent arrival of a shipment of Murano glasses, the spoils of a family trip to Italy, she is rethinking the tablescape on the dining room sideboard. Ms. Shields is also contemplating an addition to the side table that holds her growing collection of crystal match strikers.

“I’m going to Oklahoma soon, and I bet there are some great little antiques places there,” she said. “What do I need? Nothing. But I’ve got the match strikers. Now I’d love to find a sterling candle snuffer.”

Bat Bought Into Your Home? Here is What to Do