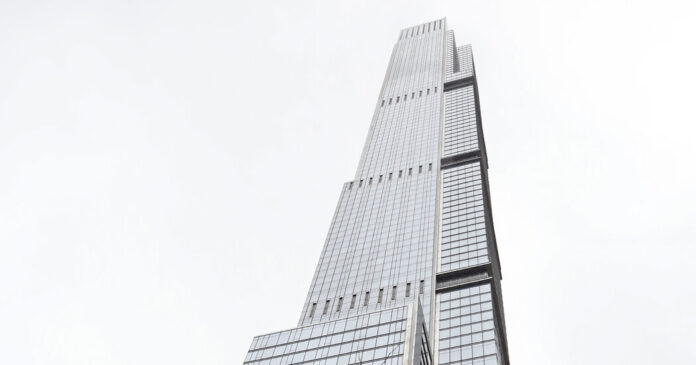 The supertall Central Park Tower, the latest addition to Billionaires’ Row by Extell Development, has seen a lot of sales activity in its first full year of closings, but not without deep discounts. And this continued through the holidays.

An apartment encompassing the 124th floor of the steel-and-concrete skyscraper, rising 1,550 feet at 217 West 57th Street in Midtown, sold for $50 million in December, far below the $66 million initial asking price, and one on the 122nd floor for nearly $45 million, down from $65.5 million.

Both properties, acquired by anonymous buyers, still topped the list of New York City’s priciest closings for the final month of the year, which was marked by a general slowdown in luxury sales.

On the Upper East Side, two stately townhouses sold, one by the estate of Jayne Wrightsman, a grande dame of New York’s high society who died three years ago, and the other by Richard Snyder, the former head of the Simon & Schuster publishing house.

The model Alessandra Ambrosio found a buyer for her Murray Hill penthouse.

René Pérez Joglar, better known as the Grammy Award-winning rapper Residente, is the new owner of a penthouse in TriBeCa. And Jeffrey W. Greenberg, who once ran the insurance giant Marsh & McLennan, and his wife, Kimberly Greenberg, bought a Central Park West co-op.

The Central Park Tower condos that sold for $50 million and about $45 million are similarly configured and with equally dazzling vistas of the park, just a block away.

Each measures roughly 7,000 square feet, with five bedrooms and five en suite bathrooms, along with a sitting room, library, powder room and family room. There’s an enormous grand salon with living room and dining space — and at nearly 1,580 square feet, the space is bigger than many two-bedroom apartments in the city. Just as huge is the primary bedroom suite, where there is a sitting area and an expansive bathroom with dressing rooms and walk-in closets.

The buyers used the limited liability companies Centralapt and Noble Castle L.L.C. in the transactions.

Two other units also closed in the building in December. A 33rd-floor apartment with three bedrooms and three and a half bathrooms sold for almost $7.9 million; it was on the market for $9.6 million. The buyer was CPT 33A LLC. And a one-bedroom, one-and-a-half-bath residence on the 46th floor, listed for nearly $4.3 million, sold for almost $4.1 million to Zhuangli Lv, according to the deed.

Sales at Central Park Tower, on West 57th Street between Broadway and Seventh Avenue, began in late 2021, and throughout this past year, there have been 41 recorded purchases, according to StreetEasy.

Many of the closed units, though, were significantly reduced by Extell, which also developed the skyscraper at nearby 157 West 57th Street, known as One57, once the record-holder for the highest price paid for a single residence in the city, at nearly $100.5 million. That sale was surpassed by a $240 million sale at 220 Central Park South, which unlike the luxury buildings on Billionaires’ Row, directly faces the park.

Extell is looking to break the record yet again, with the $250 million listing of a penthouse at the pinnacle of Central Park Tower and billed as “the highest residence in the world.”

The townhouse owned by Mrs. Wrightsman, at 182 East 64th Street, between Lexington and Third Avenues, was sold by her estate for $9.7 million, down from the $12 million asking price in late 2020.

The building — five stories high and 25 feet wide — had previously been owned by John Hay Whitney, a member of the wealthy Whitney family as well as publisher of The New York Herald Tribune and U.S. ambassador to Britain under President Dwight D. Eisenhower, among other things.

The sprawling house has around 7,000 square feet, and according to the listing, had been divided into four apartments that the listing says could easily be reconfigured back to a single residence. Or it can stay as-is. The property comes with plenty of outdoor space, including a landscaped rear garden and a terrace on the third level. And then there’s an amenity most New Yorkers can only dream of having: a three-car garage.

Mrs. Wrightsman, an avid art collector and philanthropist, had her main residence at nearby 820 Fifth Avenue, facing Central Park at 63rd Street. Her third-floor co-op apartment there was listed by her estate in 2019 for $50 million. It is currently on the market for $39 million.

The eight-story house, off Park Avenue in the Lenox Hill neighborhood, is bigger than some boutique hotels (and probably with a few more perks, too). It has more than 10,000 square feet of interior space, with eight bedrooms, eight and a half bathrooms and eight fireplaces. Plus, there’s a wood-paneled library, a full-size gym and Pilates studio with massage room, and a large wine storage that can hold 600-plus bottles. Outdoor space includes a rear garden and terraces off the dining room on the parlor level, the top-floor bedroom and on the roof.

Mr. Snyder, who is best known for his tenures at Simon & Schuster and Western Publishing, had bought the house in 1996 for $4.9 million.

Ms. Ambrosio got nearly $2.8 million for her penthouse at 311 East 38th Street, known as the Whitney, just below the $3 million price tag but still giving her a tidy profit. She had bought the apartment in 2005 for around $1.9 million and had been renting it out in recent years.

The 1,600-square-foot duplex, with double-height ceilings and pretty views of the East River, has three bedrooms and two and a half bathrooms. The apartment also comes with an abundance of outdoor space that includes a 535-square-foot terrace on the second level and a wraparound terrace and additional balcony on the first level.

Ms. Ambrosio, a Brazilian American model whose main residence is in Santa Monica, Calif., is best known for her work with Victoria’s Secret.

Her penthouse was purchased through a trust for Sonia Alreja.

Residente, the rapper, paid just under $10 million for his new home, a four-bedroom, three-and-a-half-bath penthouse at 416 Washington Street.

The 3,585-square-foot apartment was newly renovated and move-in ready. It has high ceilings, a large skylight and fireplace in the great room, a laundry room and custom closets. But probably the best feature is the outdoor space. There’s a 400-square-foot terrace with scenic views of the Hudson River and an outdoor shower, which will be great when the weather gets warmer.

Residente, a founder of the alternative rap band Calle 13 and also a writer and producer, has won several Grammy Awards. He recently put his Los Angeles home on the market.

Mr. Greenberg and his wife bought their duplex at 88 Central Park West, known as the Brentmore co-op, for $9 million.

The 4,000-square-foot apartment offers impressive tree-level views of the park and it oozes charm.

It has four bedrooms, three full bathrooms, a study that could be converted into another bedroom, and extra-large living and formal dining rooms. And throughout the home are numerous prewar flourishes that include coffered ceilings, stained glass, decorative moldings, hardwood floors and a fireplace in the living room.

The sellers were listed as William Sherman and Gail Sherman.

Mr. Greenberg currently runs the private equity firm Aquiline Capital Partners. He had served as chief executive of Marsh & McLennan from 1999 until 2004, when he resigned amid a New York State investigation into improper practices at the company.

In late-month closings, Deirdre Imus sold the Upper West Side penthouse that she had shared with her husband, the radio host Don Imus, who died three years ago. The sale price for the sprawling, two-level co-op, at 75 Central Park West, was $8.8 million, well below the $16.9 million initial asking price in 2016. The fully renovated home has three bedrooms, two and a half bathrooms, a paneled library and a wraparound terrace embellished with majestic stone urns that offers panoramic views of the park and Midtown skyline.

Ms. Imus, an artist and author, runs the Deirdre Imus Environmental Health Center, which focuses on the health and well-being of children.

The buyers were John Petry, a hedge fund manager, and Karen Petry.

Home Searching on Mauritius: Indoor-Outside Circulate within the Indian Ocean